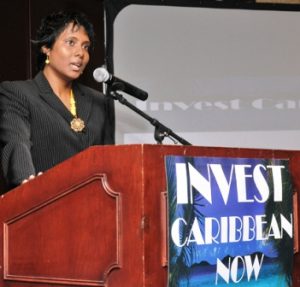 The growing importance of the Caribbean in foreign direct investment and its relevancy to global economic growth was high on top of the agenda at the recently concluded third annual Avalon Invest Caribbean Now (ICN) Forum in New York.

An estimated 150 delegates attended the two-day event held at the Radisson Martinique Hotel in mid-town Manhattan including Anthony Eterno of the Caribbean Affairs Office in the US State Department; Prime Minister of the Turks & Caicos Islands, Dr. Rufus Ewing  and his Minister of Finance C. Washington Misick.  Other delegates include cabinet ministers and commissioners from 10 Caribbean nations, private sector investors from the U.S., Chinese representatives and the media.

Felicia Persaud is ICN Founder and CEO of Hard Beat Communications.  She argues that the Caribbean is relevant when eight nations in the region are in the top 100 fastest growing economies globally compared to 10 for Latin America as of 2012.

“If Christopher Columbus thought we were relevant back in 1492 then you can bet your bottom dollar in two thousand and thirteen, the Caribbean is relevant," she declared in her opening remarks.

Despite her swamped schedule, Persaud was willing to accommodate an interview via email on ICN 2013 achievements.  A transcript follows.

What did Invest Caribbean Now Forum achieve at ICN 2013 Forum?

FP:  There were several important achievements from ICN 2013.  First, it was the first year that we brought together a Chinese delegation and a U.S. State Department official in the same room with Caribbean governments and US private sector investors and companies. That alone was an achievement, especially since it came on the heels of the US’ vice president’s visit to the Caribbean for the signing of the United States – Caribbean Community Trade and Investment Framework Agreement, (TIFA), on May 28th and the Chinese President Xi Jinping’s  visit from May 31 – June 2nd.

Secondly, the Chinese delegation openly invited Caribbean ministers to do a business investment tour of China in the Fall.   So we now hope governments will step up to the plate and take up this opportunity and  Royal Caribbean Cruise Lines has unveiled a real plan to boost investments in the ports of the Caribbean that is in the hundreds of millions so that is definitely something to be proud of.

Additionally, many private sector individuals have begun dialogue with governments especially the Turks & Caicos government which put the spotlight on investments in their beautiful island at ICN 2013 and the media coverage – both pre and post has been incredible and we are truly blessed and grateful to God as he’s the only one who truly helped make this happen.”

How has the Forum impact business and investments in the Caribbean?

FP:  We are a matchmaker… we bring the investors and governments together and hope they will date and do business. We are not an investor.  But in just three years, there is no doubt that Invest Caribbean Now has already become the definitive investment forum in or out of the Caribbean.  It is definitely the most promoted and we keep on telling the ‘Why Caribbean” story so more and more, we will kill the negative stereotypes that exist when it comes to the Caribbean and ensure we become the next IT destination for investors anywhere.

Three years after its formation, Invest Caribbean has expanded and teamed up this year with the Chinese American Business Development Center to put the spotlight on Chinese foreign direct investment as well as to provide a great platform for Chinese investors to learn more about investment opportunities in the Caribbean.  Is there any expansion plan to team up with the African Union to provide African countries investment opportunities in the Caribbean and vice versa?

FP: We are open to any investor in the world who wants to Invest Caribbean, whether they are from the US, China, Brazil, Dubai or Africa. The focus of this event remains the same as it did at its conception stage – to tell the world that the Caribbean is open for business, is the last emerging market on earth and is ripe with significant and diverse investment opportunities.

The US celebrates Caribbean Heritage Month (CHM) during the month of June, which coincides with ICN 2013 Forum.  Is CHM celebration on ICN 2013 Forum agenda this year?

FP: ICN is part of Caribbean Week in New York and Caribbean American Heritage Month in the United States and no other event in this month or on this calendar of events for the week does more to spotlight on the Caribbean while bringing US companies, investors and governments.  We celebrate by showcasing our talent and investment options, as the world already knows our culture and that we throw a great party.  So, what better celebration is there of this month?