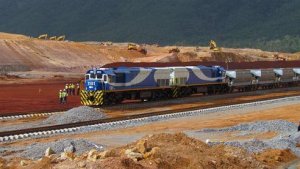 Sierra Leone has one of the world's fastest growing economies, according to an International Monetary Fund report. But the post-civil war boom has not yet brought benefits for everyone.

Residents of Freetown, the capital of Sierra Leone, wake up every day to the thudding sounds of construction work. Ten years ago, noise like this signified another bloody day in the country's civil war. But today it is the sound of a country rebuilding its damaged infrastructures.

Throughout the city, old roads are being ripped up and neighborhoods are riddled with construction sites.

Road construction is being presented as one of the government's major success stories.

In almost every street, new structures are rising up. The government recorded the highest rate of infrastructural growth in 2012, which experts say is a clear sign of an economy that is growing.

Looking to the future

In its 2012 World Economic Outlook Report, the International Monetary Fund (IMF) stated that Sierra Leone's Gross Domestic Product (GDP) rose from 3.2 per cent in 2009 to 6 per cent in 2011. The economy is projected to grow by 35.9 percent.

"Obviously the mining industry has an impact on those figures," said marketing and communication consultant, Marisa Zawacki. "If you look at Sierra Leone, there has been a lot of mining activity in the last couple of years and that has affected the numbers in these IMF reports."

Ironically, diamond mining was one of the major causes of the civil war in 1991. The conflict cost Sierra Leone some 50,000 lives, properties worth millions of dollars were destroyed and hundreds of people had their limbs brutally hacked off by rebel fighters.

A nation of roughly six million people, Sierra Leone has held three peaceful elections since the war ended in 2002. Since peace returned, the country has been on the road to recovery, most notably in economic terms.

Sierra Leone is still heavily dependent on foreign aid to fund its budget deficits. President Ernest Bai Koroma is, however, reducing this by enforcing various forms of revenue collection. One is the Goods and Services Tax (GST).

"The GST contributes to the development of Sierra Leone greatly,"said tax collector Sulaiman Kargbo. "Because without this I don't think that we can move forward. Collection of taxes has been a great improvement for Sierra Leone, just like we see other countries developing from taxes and Sierra Leone decided to take this forward with the government coming back in 2007."

Analyst Marisa Zawacki noted that "GST was a tough one for the government." In an interview with DW, she said it took a lot of education work with the local populace "to let them understand the benefits of paying taxes."

"People want to see the benefit first hand and if there is a disconnect there it's going to backfire. As long as people on the ground can see the benefit from a social standpoint, from an infrastructure standpoint, if you look around Freetown at the moment, all the roads are ripped up. You could make that link that by paying your taxes, your money will be going into a government fund that should help social standards across the country."

Taxing goods and services in Sierra Leone is new to many and therefore hostility to paying taxes was frequently encountered by the revenue collection body, the NRA. However, the sensitization process has shown success and small business owners are now apparently more willing to pay taxes.

Nevetheless, Lansana said he is "happy to be a part of this development." He acknowledged that "there is no way Sierra Leone will grow without people paying taxes and dues."

Another important contribution to the development of the country's economy is foreign direct investments (FDI). Although FDI is highly concentrated on the mining and telecommunication sectors, a recent United Nations report indicates that Sierra Leone has a lot of potential for FDI in cash crops, fisheries and ecotourism. What is worrying is that FDI requires a thriving private sector economy and Sierra Leone falls short of that.

Among new investors in Sierra Leone are the Hilton Hotel group that has invested $41 million (32 million euros) in constructing a hotel in Freetown and a group of Chinese businessmen who have invested $190 million in a new international airport.

The average Sierra Leonean is not yet feeling the benefit of the economic recovery. Many people are deeply frustrated by higher food prices and local businesses claim they are feeling the pinch, despite IMF reports that the economy is growing.

The chairman of a market traders' union, Abdul Kaloko, said "We get embarrassed sometimes because we can't afford expensive products. Sierra Leone is gradually improving but commodities like palm oil and other goods are becoming expensive."

Local trader Mabinty Kabbah agreed. "The economy is very hard, things are very expensive and the cost of living is very difficult."

But analyst Zawacki says it's just a matter of time. The economy hasn't "trickled down as of yet. A market woman will feel an impact hopefully when a lot of these private sector companies come in and invest in the country and start using the local supply chain."