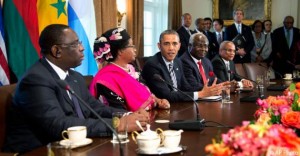 President Barack Obama and first lady Michelle Obama will visit Senegal, South Africa and Tanzania from June 26 to July 3, the White House announced on Monday. The Obamas spent one emotionally charged day in Ghana in July 2009—the president’s only other visit to sub-Saharan Africa since taking office.

“The president will reinforce the importance that the United States places on our deep and growing ties with countries in sub-Saharan Africa, including through expanding economic growth, investment, and trade; strengthening democratic institutions; and investing in the next generation of African leaders,” press secretary Jay Carney said in a statement.

“The president will meet with a wide array of leaders from government, business, and civil society, including youth, to discuss our strategic partnerships on bilateral and global issues,” Carney said, adding that “the trip will underscore the President’s commitment to broadening and deepening cooperation between the United States and the people of sub-Saharan Africa to advance regional and global peace and prosperity.”

There was no word on whether the president would take up actress Charlize Theron—a native of South Africa—on her offer to be his tour guide.

Secretary of State John Kerry had said in mid-April that Obama would travel to Africa. Administration officials have expressed concern about China’s growing influence with countries on the continent.