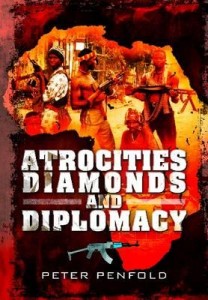 Former British High Commissioner to Sierra Leone, Peter Penfold, has launched a book detailing his account of the Sierra Leone civil war titled: ‘Atrocities, Diamonds and Diplomacy: The Inside Story of the Conflict in Sierra Leone’.

The launching took place on Wednesday September 12 at the School of Oriental and African Studies (SOAS) in London. The ceremony attracted several people including former British expatriates in Sierra Leone, students and Sierra Leoneans in the UK.

Mr. Penfold served as British High Commissioner to Sierra Leone from 1997 to 2000, when he was recalled following his alleged involvement in the Sandline scandal.

The 200 page book, which he dedicated to his wife and the people of Sierra Leone, covers mainly the AFRC/RUF coup of 1997 and its aftermaths, including the Sandline scandal, the ECOMOG intervention and the role of the civil militia group called the Kamajohs. The book also contains graphic images of some of the atrocities committed by the rebels in Sierra Leone.

Speaking at the ceremony, the former diplomat described the book as a work to not only put straight some of the allegations he faced from the British media, but also his contribution towards the recent history of Sierra Leone.

Penfold said that he, the UN Special Envoy Berhanu Dinka, the US Ambassador John Hirsch had a meeting with President Kabbah at his Juba Hill residence where they informed him about rumours of a pending coup. He said the coup was apparently due to some discontentment in the army. He said the army, among other things, were not impressed with President Kabbah’s decision to cut their rice ration and to appoint Sam Hinga Norman, the head of the local militia group (the Kamajohs), as minister of defence overseeing the army. Penfold said President Kabbah promised to look into the matter, but “there was no urgency”. The coup then took place a week later.

Penfold said, while in Guinea, exiled President Kabbah informed him about a US$10 million contract he had signed with a Canadian mining company called Blackstone. The contract was for the purchase of equipment and the provision of personnel and training to support President Kabbah’s restoration. “When President Kabbah sought my advice on the said contract, I told him that the decision was for him to make,” he noted.

He said although the contract did not mention anything about arms and ammunition, he held the belief that it would possibly include them since the UN arms embargo on Sierra Leone at the time did not include the government. He said it was sad that allegations were made against him regarding the deal even though he had little to do with it.

Penfold praised the gallantry of the West African intervention force (ECOMOG) that was led by Nigeria, loyal troops of the ousted government of President Kabbah and the civil militia group, the Kamajohs. He said it was good that the decision for a military intervention took into consideration the widespread dislike the Sierra Leonean public had for the junta and the atrocities being perpetrated by the AFRC/RUF.

Penfold said plans were underway to ensure that the book, which costs £13, to be available at a cheaper cost in Sierra Leone.

Reacting to the contents of the book, Charles Davies – former editor of the Christian Monitor Newspaper in Sierra Leone – praised the former British envoy, whom he described as someone who, during his time in Sierra Leone, was caught up between his work as a diplomat and the love he had for the country. Davies said Penfold could also be remembered as someone who laid the foundation for the British intervention in the war in Sierra Leone.

“I admired the courage and bold steps taken by Penfold to face and negotiate with the fearsome rebels at the time,” he said. He added, however, that it was that some of those who made sacrifices for the war in Sierra Leone were betrayed by the people they helped fight for.

Davies singled out the Kamajoh head, Sam Hinga Norman whom he said was betrayed by the government he fought to restore.