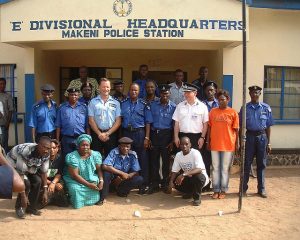 As a follow up to Mr. Abdulai kamara’s piece on the alleged manhandling and abuse of Mr. Alie Mozart Sesay by police officers in Makeni (Express and Star, Aug 5th.), you would be hard pressed to ignore such a story. According to the allegation, Mr. Sesay, a journalist was molested and detained by the police in Makeni. His crime: for taking photos of female police officers who were plaiting their hair while on duty. The article goes on to allege that Mr. Sesay was detained for ten hours after a gruelling session of statements and threats to charge him to court. According to the piece, the LUC, Mr. G.M. Turay ordered the detention of the journalist after he failed to apologise to the officers. Mr. Sesay was reportedly asked to apologise because he apparently did not seek consent before taking the photos. Well here is the good news Mr. Turay:

Members of the police force are public servants in the line of duty, and in public service. If your members are not engaged in any dubious or questionable behaviour, then why shy from being photographed while performing a duty that has been euphemistically dubbed “a force for good”? This kind of behaviour, if true, is bound to raise a lot of questions among residents. Firstly, did it need an intervention from the Deputy Internal Affairs Minister, Shaka Tarawally to facilitate the release of the journalist? Can Mr. Turay remind us where in the statute books that you need a special permission to photograph such officers while on duty? So where does this kind of action sit with the Public Order Act, 1965? Some of us have been vocal in clamouring for the review of the Public Oder Act, 1965, while many, especially journalists have been wary and antagonistic about it. Will this be one reason why the resistance from journalists? : The fear of the Act being abused, misused, refused and disused?

It goes without saying, that the police force in this neck of the woods needs a significant dose of discipline; which at present is premium. The Makeni police station is a stone’s throw from the central markets. But walking into the reception area of that station, you will be forgiven to think that you are still in the market square. The amount of cacophony that goes on there is unbelievable. Notwithstanding the noise and market-like atmosphere, you will have to try your best to get the attention of a police officer upon visiting.

Having destroyed the photographs that were reportedly taken, can the LUC tell us what happened to the “female” police officers? When the President presided over the launching of “Operation WID” early this year, you would expect that Makeni would serve as a beacon in promoting the drive. If that was the hope, you will be disappointed as that operation has fallen flat on its face in Makeni. All you have to do is stand at Independence Square and watch the “Okada” riders run the roost with reckless abandon. Motorcycles with no number plates, riders without helmets, bikes with 2 or more pillion passengers, etc are the order of the day. But hey, the LUC can find time instead to have photographs of his female officers deleted from a journalist’s phone camera. If the allegation that the LUC  recently issued a “ strong warning on the Traffic division in Makeni to completely stop or desist from arresting African Minerals/ADDAX Bio-Energy vehicles that flout the laid down traffic rules” is true, we now know why other road users are forced to be extra careful when these vehicles are in town. A toad does not run in the daytime for nothing. Makeni police: Pull Your Finger Out.