The headlines that the recently concluded Koinadugu District bye -elections was “marred by violence, intimidation and fraud” (the sierraleonetelegragh.com-04/10/21) comes as no surprise. With the results from the National Electoral Commission (NEC) pending at the time, the usual accusations of fraud and self-declaration of victory from both the SLPP and APC parties are as normal as day and night. Both parties equally declared victory and accusations of fraud by the party opposite in equal measure. People always say that there are two sides to the story, but in this case, there are three: your side, my side and then the truth. So which side was the truth?

That responsibility fell squarely on the shoulders and neck (pardon the pun) of the NEC. It confirmed in its initial report that the election was “marred by widespread political intimidation, incidents of thuggery and suspension of tallying.” All the parties involved seemed to agree on this. NEC further claimed that “Generally, the Voting and Counting ended peacefully, but there were incidents of widespread and unprecedented political intimidation and thuggery ranging from the burning of ballot papers and other materials, disruption of voting process, disruption of counting process and running away with ballot papers and sealed ballot box, vandalization of vehicles, the use of vehicles without registration number plates, the movement of thugs from one centre to the other with motor bikes and disruption and suspension of the tallying process”.

Let’s us be honest with ourselves here. What would you call an election where, “burning of ballot papers and other materials, and running away with ballot papers sealed ballot boxes” took place? But if NEC was apparently complimentary about the whole process, that “Generally, the Voting and Counting ended peacefully” (NEC), what did it count? Ashes? Does that give credence to the notion “that it is the counting and not the voting that is democracy? But credit to the people of Koinadugu, NEC recognised the feat of the voters of Koinadugu to come out and vote, despite those challenges. Change will not take place without political participation.  Since the beginning of time, election results have always been contested. This is specially so with the losing sides, who always cry foul. No shocks there. 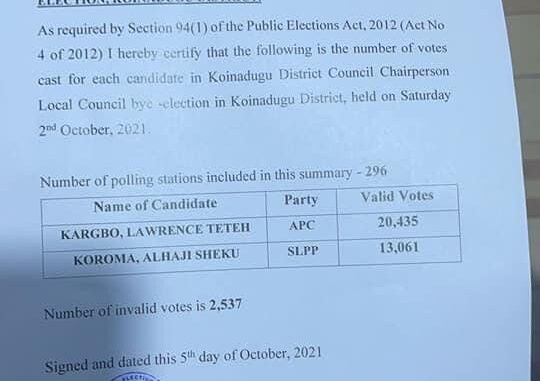 But what is becoming worryingly troubling is the growing use of the Trumpian Syndrome. It is one thing to contest an election result. But it is an entirely different kettle of fish when political parties, in addition to crying foul, officially self-declare victory and threaten that they will not accept the election results; even before NEC had made any official announcements. “Let it be known to the general public that the SLPP will not accept any attempt by the APC to force its will through blackmail, on the people of Koinadugu whose inhabitants outside the township of Kabala have suffered many years of devastation and deprivation in the hands of the APC. The people have spoken through the ballot box and their voices have been heard. The SLPP is patiently waiting for NEC to complete its process without any blackmail by the APC and for our Councillor and Council Chairman respectively to take their seats and deliver the much-needed development for the people of that district” (Sierraleonetelegraph.com-04/10/21).

The APC party released a party statement, “With 91% of the results captured in our Tally centre, APC leads by over 6,500 votes. We are also leading in the Councillor election by 96 % with 100% of results already captured in our database”. I love the use of the word “Capture”. “Any attempts to steal our votes by the SLPP using brute force will be resisted by the party” Both parties Trumpian, claiming fraud and the unwillingness to accept the results. But both can’t be right at the same time, can they? So, when both our political parties were accusing each other of STEALING, were they telling us something we already know? At least, both agree on one common denominator.

Some will say that it is understandable, if supporters express declare such victory for their respective parties, before the official declaration from NEC as wishful thinking. But when our political parties give official statements of being victories when NEC is yet to officially announce the winner/s, does that not count as a recipe for trouble? Are our political parties intentionally stoking up the fires for trouble by making such reckless statements at such a time? When you look at the unsavoury events leading up to and during the election process, it beats logic to deny that both parties are not guilty of using incendiary language or tactics to whip up a frenzy for chaos. We know that these parties tend to thrive on chaos, a convenient excuse to distract from matters at hand. But when you consider the potential outcomes, which often involves the loss of lives and property, their reckless behaviour becomes glaringly inexcusable.

To all intents and purposes, this confirms the fact of irony, that the people we tend to vote for look down on voters and voting. It turns out like a snake eating its own tail or a wolf in a trap gnawing off its head to escape. We know that these days, democracy is about being allowed to vote for the candidate you dislike least. But these statements make waiting for the results from NEC feel like waiting for our two wolves and a lamb voting on what to have for lunch. The suspense and anxiety of waiting for the results is no justification for our main political parties to beat the gun with their unofficial and unverified results. That can only give birth to an already combustible political grenade.

Some say that you can determine the success of a wedding from the bachelor’s eve. The general elections may seem distant   but a day in politics is also a long time. Without sounding condescending to the local elections, which in effect buttress our national electoral process, and if this is anything to go by, then woe betide us. Unfortunately, those that may pay the ultimate price for the recklessness of our politicians don’t get to read these. Sadly, they are the collateral damage for political egos. 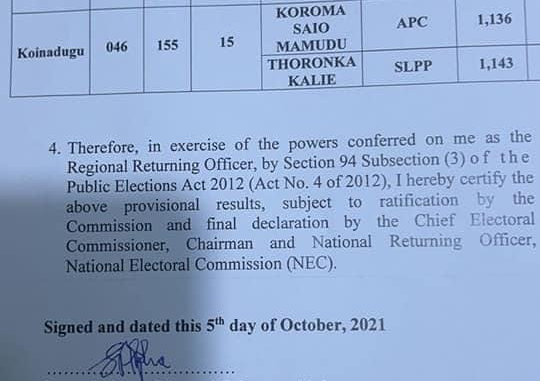