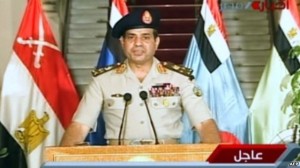 The head of the constitutional court will be sworn in to run the county’s affairs, form a technocrat government, and call for early elections, the Army chief said.

In a live televised statement, Army chief Abdel Fattah al-Sisi said the action was taken to resolve the political crisis in Egypt.

Al-Sisi said the move had to be taken after Morsi refused the military’s unlimatum to reach an agreement with Egypt’s opposition.

The Army chief read the statement as the Grand Imam of Al-Azhar, the head of Egypt’s Coptic Church and opposition leader Mohamed Elbaradei looked on.

Earlier in the day, a senior aide to Morsi called on Egyptians to peacefully resist what he described as “a military coup” underway.

In Washington, the State Department voiced concern about unrest in Egypt. But it said the situation remains fluid and it cannot confirm that a “military coup” is underway.

In a statement issued hours before the deadline, Morsi proposed a consensus government and an independent committee to craft constitutional amendments as a way out of the crisis. But he also repeated he has no intention to step down, warning his electoral legitimacy is the only safeguard against instability.

The army’s announcement could spark a violent showdown between the military and suporters of the Islamist president.

Last year, Morsi pushed aside top military leaders of deposed president Hosni Mubarak, including the head of the Supreme Military Council and the army’s chief of staff.

In a speech late Tuesday night, Morsi defended his legitimacy and vowed to remain in office, even if it resulted in his death. He also demanded the military withdraw its threat to intervene in the country’s political crisis.

The country’s Islamist government and military leadership have been each warning they are ready to shed blood in order to protect the nation.

It’s not clear what the army move will lead to. At least dozens people have been killed this week in clashes between supporters and opponents of Morsi.

Morsi was imprisoned by the deposed president Hosni Mubarak who is now serving a life sentence in prison for complicity in the killing of hundreds of anti-government protesters during last year’s 18-day uprising that forced him to resign on February 11.