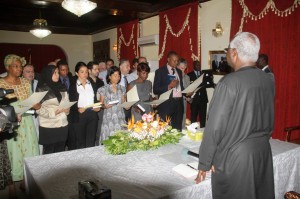 20 new Sierra Leoneans who acquired citizenship status through Naturalization as provided for in the 1991 Constitution of Sierra Leone have subscribed to the oath of allegiance at the Presidential Lodge, Hill Station on Tuesday 10th September, instant.

In a brief congratulatory statement shortly after administering the oath, President Dr Ernest Bai Koroma admonished them to be good citizens, saying a good citizen is one who pays his/her taxes, law abiding, and works within the framework of the laws of Sierra Leone.

The President congratulated them and noted that they were coming in at a time when the country is going through rapid transformation. He also encouraged them to contribute positively to the national effort to sustainably develop the country.