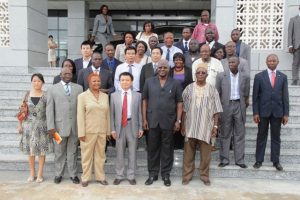 His Excellency Dr. Ernest Bai Koroma has on Tuesday 26th June 2012 taken an inspection tour of the newly constructed office of the Ministry of Foreign Affairs and International Cooperation at Tower Hill, Freetown.

The ultra-modern structure which values over Ten Million United States Dollars ($10m) was erected by the Shanghai Construction Company from the People’s Republic of China.

Briefing President Koroma during the inspection of facilities of the new five storey office structure, the company’s Relations Manager Will Yin informed the Head of State that the office was now ready for use with elevators from one floor to the other, rest rooms for gents, ladies and the physically challenged.

He also told President Koroma that the building’s top gives an aerial view of the whole of Freetown, from both the east and the west end of the city.

The office is equipped with brand new office furniture and secretariat materials all set awaiting the ministry’s staff to move in.

Other facilities contained in the new Foreign Affairs and International Cooperation office, are an international conference hall, a six bedroom guest house, chicken, cafeteria and a long list of ultra-modern office paraphernalia.

President Koroma asked both the Minister Joseph Bandabla Dauda and his Deputy Madam Ebun Jusu whether the new building was spacious enough to accommodate every staff of the ministry to which they both replied, “We have adequate facilities”.

The President’s tour took him to the international conference hall, which accommodates 150 participants at any given time, the control power room of the thermal plant, the six bedroom guest house, the water tank among other places of the facility.