The invitation letter was handed over to the Prince a couple of days ago at his 66th – floor office in the Kingdom Tower, (the distinctive bottle opener-shaped skyscraper that looms over central Riyadh, the capital) by President Koroma's envoy to the Kingdom of Saudi Arabia, H.E. Wusu Munu who also doubles as Sierra Leone's Permanent Representative to the Organization of Islamic Cooperation (OIC).

After handing over the invitation, the Ambassador and the Prince discussed social and economic issues in relation to their respective countries. The Ambassador said Prince Alwaleed's visit to Sierra Leone would further strengthen the economic and bilateral relationship between Saudi Arabia and Sierra Leone.

They also discussed the need to develop Sierra Leone's tourism sector and for the Prince's company to invest in the hotel industry in Sierra Leone. 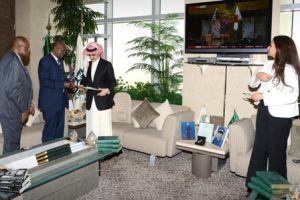 Al Waleed received a Bachelor of Science degree in business administration from Menlo College in California in 1979. He then received a Master's degree in Social Science with honors from Syracuse University, New York, in 1985.

Prince Alwaleed was recently described by the widely read Arabian Business Magazine as "the world's richest Arab". The Prince is known for his precision for exploring new and potential business opportunities and ventures in synchronization with the direction and fluctuations of the economic climate which has earned him a global name in the world of business.

According to the renowned Forbes Magazine, Prince Alwaleed bin Talal’s Kingdom Holding Company, of which he owns 95% and which trades on the Saudi stock exchange, owns stakes in hotel management companies, Four Seasons Hotels & Resorts, Movenpick Hotels & Resorts and Fairmont Raffles Holding, as well as hotel real estate such as the swanky Hotel George V in Paris and a stake in the Savoy Hotel in London.

Kingdom Holding, according to the Magazine, also owns billions of dollars of U.S. and international equities, including shares of Citigroup and News Corp.  In 2012, the Prince and Kingdom Holding bought an estimated 3% stake in Twitter, a popular social networking site, via the secondary market for $300 million.

In February this year, the Magazine states, Kingdom Holding invested $125 million in Chinese e-commerce company 360Buy Jingdong for an undisclosed stake. The Prince also owns extensive real estate and other assets outside of Kingdom Holding. He was the first individual to purchase an Airbus A380 double decker plane in the Kingdom. 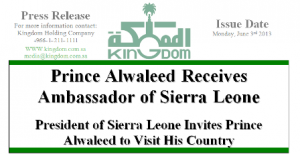 HRH Prince Alwaleed Bin Talal Bin Abdulaziz Alsaud, Chairman of Kingdom Holding Company (KHC), received at his office in Riyadh His Excellency Mr. Wusu B. Munu, Ambassador of Sierra Leone to Saudi Arabia who was accompanied by Mr. Umaru S. Dura, Minister Counselor. The meeting was also attended by Dr. Nahla Nasser Alanbar, Private Executive Assistant to HRH the Chairman.
The meeting began as Mr. Munu thanked Prince Alwaleed for giving him the opportunity to meet with him and extended an invitation from HE Dr. Ernest Bai Koroma, President of Sierra Leone to the Prince to visit the country. Mr. Munu said that HRH’s visit to Sierra Leone would further strengthen the economic relationship between Saudi Arabia and Sierra Leone.
Moreover, the two discussed Sierra Leone’s need to develop its tourism sector and the possibilities for Kingdom Holding to invest in the hotel industry there. Also during the meeting Mr. Munu presented a letter from HE Mr. Musa Tarwally, Sierra Leone’s Minister of Lands, Country and Planning. The Ambassador expressed that Sierra Leone is keen on attracting the Prince to invest in the country.
In conclusion to the meeting, the Prince asked the Ambassador to relay his cordial regards and respect to the President and Minister of Lands, Country and Planning and promised to visit Sierra Leone in the near future.
In 2003, Prince Alwaleed visited Sierra Leone and met with the former President Ahmed Tejan Kabbah.