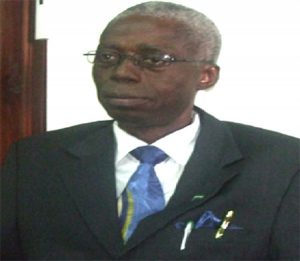 The All People Congress Party (APC)  has suffered another natural blow, as information reaching Critique Echo confirmed that the Minister of Labor and Social Security, Mr. Hindolo Sumanguru Trye , has died. According to our home based reporters, Mr. Trye died on the way to Choitram’s Hospital about two hour ago while being rushed there for treatment, after a short illness.

Hindolo Trye was the spearheader of the students’ uprising in Sierra Leone in 1977. He was exiled by the then APC government led by late president Siaka P. Stevens . He later served as Minister in the National Provisional Ruling Council (NPRC).

Ironically, Mr. Trye emerged in the year 2005 as vociferous supporter of the then opposition All People’s Congress ( APC), the party he had earlier fought against.

When the APC came to power in 2007, Mr. Trye was appointed Minister of Tourism; he died as Minister of Labor and Social Security.

May his soul rest in perfect peace.

Share this on WhatsApp
About Othman Sheriff 348 Articles
Born and raised in Kenema district, eastern Sierra Leone, Othman Sheriff began practicing journalism during his school days as a youthhood hobby. With a bachelor's degree in mass-media and communication, and a Master’s degree in development and peacebuilding, Sheriff is the Editor-in-Chief and CEO of Critique Echo Newspaper. While tirelessly using journalism as a tool to place his country’s socioeconomic and political landscape under a magnifying glass, Sheriff is deeply involved in community development projects. Over the years, Sheriff has formulated and implemented billions of Leones worth of development projects with funds from Europe and USA. He is chiefly focused on community infrastructural development and economic resuscitation projects, fostering interethnic, interreligious and sociocultural cohesion among the young population in Kenema district. Sheriff is a member of many international peacebuilding initiatives including the United Religious Initiative (URI), International Association of Educators for World Peace (IAEWP), Intercultural Leaders Network and Youth Solidary Fund program of the United Nations Alliance of Civilization (UNAOC)