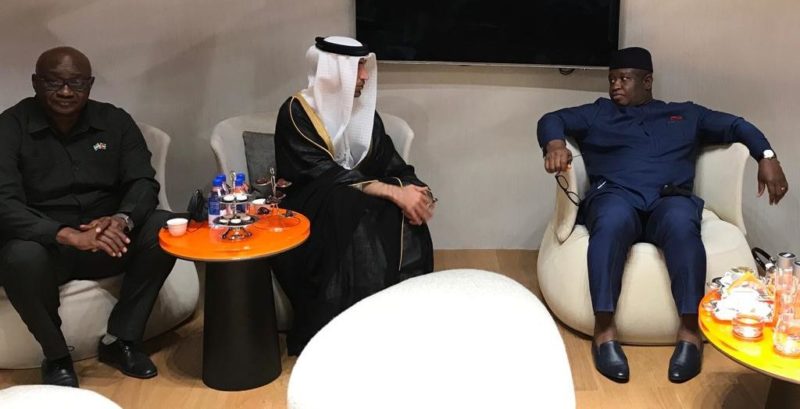 President Bio recently attended EXPO Dubai 2020, during which he urged all Sierra Leoneans living in Dubai to continue to be patriotic. The government saw the EXPO Dubai 2020 as an opportunity to showcase the best that Sierra Leone has to offer. By so doing, it was a chance to attract badly needed investments to the country.  Many had criticised the President, that such an occasion should have been graced by other high-level dignitaries like his Vice President and the Minister of Tourism. They criticise Bio that he is moonlighting as a pilot, thanks to his “love for travelling”. On the other hand, others believe that the President is doing a good job traversing the world, and that it was fitting for President Bio to spearhead his continuing search for investments in our country. During his speech, he urged all Sierra Leoneans in Dubai to act as ambassadors for our country. The programme was a major success.

But no sooner had President Bio stepped off the red carpet in Dubai, than the German government pulled the rug under him. Since taking the reins in 2005, Angela Merkel became the first incumbent Chancellor of the federal Republic of Germany not to seek re-election. Germany held its federal elections on 26 September and with the Social Democratic Party holding a slender majority of 25.7% of the total votes, Germany has been plunged into a complex coalition process. This has left the other parties horse trading and justling for power. It comes as no surprise that some of their policies are playing to the gallery; with anti-immigrant policies used as vote winners. Angela Merkel is renowned for having a soft spot for immigrants. Germany took in the highest number of refugees, especially during the Syrian debacle. Some critics see this as Germany’s way of atoning for presiding over the largest exodus of people during the second World War.

Germany is now embarking on a mass deportation of “illegal” immigrants, including asylum seekers, and many of whose cases remain unresolved. President Bio’s government has been accused of “colluding” with the German government by providing emergency and temporary documents to facilitate the “expulsions”.  Some call it “repatriation”, hmmmmmmmmm. Social media including Tik Tok, Instagram and Facebook have been flooded with video clips, with some condemning and others pleading with President Bio not to carry out Germany’s bidding. At this point, it is worth stressing that the programme of deportation is not restricted to Sierra Leone alone. But that is exactly what seems to incense some Sierra Leoneans.

In neighbouring Gambia, the ancestral home of the First Lady Fatima Bio, President Adama Barrow has flatly rejected Germany’s request to accept Gambian deportees. Many Gambians see this as a temporary relief and are not holding their breath. With the Gambian general elections scheduled for December this year, many see accepting deportees back in The Gambian as tantamount to political self-harm or suicide.  Barrow’s refusal is therefore seen as megaphone diplomacy and buying time for political expediency. They believe that the stone that Barrow is refusing shall be the head corner stone, but only after the general elections in which he will be vying for re-election. Proportionally, Gambia has one of the highest numbers of its citizens in the diaspora. It goes without saying that like Sierra Leone, remittances from the diaspora account for large chunks of its GDP. While some have hailed his stance as sticking it to an imperial power, others feel that it is disgraceful for Barrow to reject his fellow citizens. It just goes to show that in politics, you are damned if you do, and damned if you don’t.

So, what’s with the furore about this deportation debacle? One thing we can all agree on is that all the key players involved in this are making decisions based on political expediency. The yet to be Germany coalesced German government is trying to increase its favourability with the right-wing side of its populace. Adama barrow is trying to stay on course for re-election. As for president Bio, it might be too early to say. The general elections are a few years away, in 2023.

But we know that Western governments are notorious for arm twisting lesser countries. This is especially so, when you consider that these countries have their hands in the mouths of developed countries. And the begging bowl is never far away. They have been known to use threats of withholding foreign aid to get countries to do their bidding. The former Prime Minister of Britain David Cameron once threatened to withhold foreign aid from African nations that were not LGBT friendly. Yoweri Museveni famously told him where to stick his aid. America under Trump withdrew visa allocations from countries that refused to take back their deportees.

If truth be told, it is a dangerous and tricky situation for our leaders. Should they risk the possibly of losing millions in aid, to protect the interests of their “illegal” migrants living in Western countries? Or should they risk losing all the inherent benefits that come with these “illegals” remitting money and in effect contributing to the employment quotient of their respective countries? Should these governments jeopardise their international standing and relations with their paymasters in the west?  By so doing, should they risk diplomatic wrangles with the big boys? If so, at what price? You be the judge.

But before we rush to make judgments on the rights and wrongs of our leaders’ decision making in this unfortunate situation, it might be worth asking “Why do we migrate to “greener pastures” or countries” in the first place? Why do people brave the high seas, unforgiving deserts and place themselves in dangerous and life denying situations at the mercy of traffickers; just to get to these “promised lands”? Why would someone sell up their family heirlooms and venture into the unknown? What drives a person to abandon family, friends, and even all the beauties and riches of our natural resources to brave the cold and unforgiving climates in foreign lands? Don’t answer that.

Before our leaders make their difficult decisions, which in fact looks like a no-win situation, it might be worth looking in the mirror. Our leaders could benefit from trying to hazard “guesses” to these questions. It goes without question that it is these same political decisions and policies that have led to and continue to drive our youth into these situations in the first place. Let us take Sierra Leone as a case in point.  It might sound like flogging a dead horse or telling people that the Pope is catholic; but since independence our country has been plunged into successive periods of regression. Our country has gone through times that have seen gradual and incessant loss of job opportunities; hence the unemployment rate remains sky high. No one needs a lecture on the difficulties we face as a nation.

However, it will be disingenuous to lay all ills on the doorstep of the Bio administration. It doesn’t make him a saint either, but our national decline and continued exodus has been going on for far too long. The war did not help either, which was a major catalyst for the single most exodus of our population. It generated a whole generation of refugees and asylum seekers.

While some have been hasty to blame President Bio for his government’s alleged cooperation with the German government, others have been realistic enough to accept the undesirable and painful truth of the matter. Like the Government of Sierra Leone, its German counterpart has a duty to protect its borders and oversee who goes in and out of their country. Some have argued that the German government is only targeting “illegal” migrants, though it is legally unlawful to be an illegal immigrant in any country. They conclude that the only people criticising the Bio administration are those residing unlawfully in the country.

On the other hand, others would feel that “na tin mek tin be”, and hope that President Bio and the German government can come to some understanding with less severe consequences. Imagine the consequences of sending such many people back home. Imagine how many homes would lose their main source of sustenance? How many building contractors, taxi drivers, Okada riders, fiancées, wives, husbands, parents and even side chicks would lose a major chunk of their stipends or employment?

This looks like a classic catch 22 situation for us all. If our government refuses to accept them, it risks the wrath of a major financial donor and international partner. Others with ethical considerations might accuse the government as “denying” and disowning its citizens as if they are persona non grata. If the administration accepts their deportation, repatriations or whatever you want to call it, you wonder what repercussions these may have in political, social or financial terms. Either way, it’s the rock and the deep blue sea (pardon the pun). Those of us that are familiar with such situations from experience, know the feelings. And it’s not a good one. If you were in Maada Bio’s shoes today, and it’s a big shoe though; what would you do?

We hope that common sense would prevail, and the law would be tempered with compassion. Most of us did not venture across those terrible seas for a better life. We did so to find better OPPORTUNITIES. With OPPORTUNITIES come better options. I hate to say that I ventured out for a, “better life”, because for every life, there is always some draw backs. I sometimes wonder what would have happened if those opportunities where available. Guess.  I don’t know when last I ate a freshly picked, pounded and cooked casava leaves. You see? Still waiting to sample a freshly baked Cassada bread or take in the breeze at Lumley Beach.

Should Bio stick or twist?

Don’t forget to close the door when you leave the room.