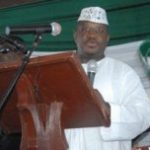 Presidential aspirant for the main opposition Sierra Leone Peoples Party (SLPP) Julius Maada Bio over the weekend delivered his maiden election speech at the Unity hall at Wallace Johnson street, apologizing for the wrongs of the NPRC Junta and calling on President Koroma to sign an agreement to guarantee free and fair elections.

In the widely expected response to the allegations made by the ruling All Peoples Congress (APC) party Secretary General Victor Foh that the former military leader had to answer for the execution without trial of Bambay Kamara and others, Maada bio in his 12 page speech said “I had made it clear, in my testimony to the TRC, that I bear neither personal involvement nor personal responsibility for those executions nor was I in any position to prevent them from happening. I was neither the head nor the deputy head of the NPRC junta at the material time. I stand by that testimony.”

However he said “as a member of the former NPRC junta, I feel morally bound to express, on its behalf, deepest regret for the wrongs committed by the NPRC and to also express profound apology and sympathy to the families of the victims concerned” adding “It is my sincere hope that we, as a nation, can now consign that regrettable incident to history and agree to move on.”

The SLPP Presidential aspirant invited president Koroma to “join me now in issuing a joint statement’ where they would agree “to bury permanently in their tombs the horrors of past conflicts and past political misdeeds.” Stating that “There is no political capital for any political party from letting the ghosts of the horrendous human rights record of the 1970s through to the 1990s to return to haunt our body politic, Bio urged that “We should set our gaze ahead of us instead of behind us.”

Second, he said that he and President Koroma should also agree “that everything possible would be done to ensure that the National Electoral Commission conducts the 2012 elections in a manner that is fair, transparent and credible,” adding that “once that condition is met by the NEC, that we agree to accept the results of the elections and ensure that power is transferred peacefully.”

Stating that the “2012 elections are going to be about issues, not personalities” Bio accused the ruling APC “of diverting public attention away from their appalling economic record by throwing everything in their kitchen sink at me.” He stated that “Disappointingly for them, the dirt didn’t stick, because the people of this country have become much too aware, much too discerning to allow the APC to get away with that ploy; instead they are insisting that the 2012 elections should be wholly about the national development agenda whether at the front, centre or at the back of that contest.”

Making his clarion call on youths to join him in the transformation of Sierra Leone for better through the ballot box, Bio pleaded with young people in the diaspora, in villages, farms, mining pits, streets, houses, colleges, schools and ghettoes to come forward to start a new direction, a new revolution for a better Sierra Leone. Talking on his new direction initiative Bio observed that the 2012 elections are about putting the youths at the center of development and in the driving seat to seek a new direction for Sierra Leone. As he put it ‘ we are living in a country that started mining diamond in 1930, Rutile in 1970′s and gold and bauxite for so long, but still healthcare and education are largely funded buy foreign donors”. He said even though our education was the pride of West Africa for years, 50 years later 5% of our children pass the WASCE examination; while University postponed exams for lack of papers.

Playing to the gallery as all political speakers do he claimed that “Ernest is tired; Ernest has failed us; Ernest can simply not deliver. He must give way peacefully for a new person to take over the seat of power in State House in 2012. And that person is yours truly, Julius Maada Bio.