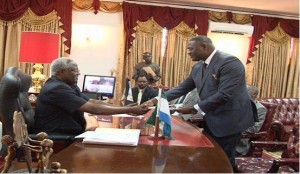 RightsWay International Accuses Sierra Leone Anti-Corruption Commissioner of being bias and calls for his resignation over missing ebola funds scandal.

RightsWay International is disappointed and shocked by the irrational press release http://www.anticorruption.gov.sl/show_news.php?id=462 issued by the Anti-Corruption Commissioner, Joseph Fitzgerald Kamara targeting a few ‘servants’ not the ‘masters’ of the missing Ebola funds. RightsWay International calls for the immediate resignation of the Anti-Corruption Commissioner.

The Report looked at $19 Million US dollars the government set aside for fighting the virus. The money came primarily from institutions and individuals donating from mostly within Sierra Leone, and from tax revenue.

The Auditor General's Report did not include money donated by the United Nations, European Union, Commonwealth, international government aid or assistance from NGOs. Sierra Leoneans are yet to see an audit into the massive international donor funding. Such a revelation will be another bombshell.  The Anti-Corruption Commission (ACC), headed by an appointee of the President is still thought to be a bulldog in the scheme of things, unable to assert itself to fight corruption.

If the ACC were serious about fighting corruption and bringing to justice those who embezzled the Ebola funds, then the Anti-Corruption Commissioner must also investigate those who signed the cheques and those who authorised payments.

The Anti-Corruption Commission also must invite and investigate the following 12 top ‘masters’ of the missing Ebola funds:

Unfortunately, the Sierra Leonean authorities (executive, legislative, judiciary, media, and civil society) who are also being implicated in the Auditor's Report cannot be trusted to carry-out an independent and credible investigation.

RightsWay International, therefore calls on the international community to commission an independent investigation across all parties and help to recover all the missing ebola funds. Those found guilty should be imprisoned, blacklisted, travel bans imposed and their properties confiscated.

The missing Ebola funds is due to negligence and failings on the side of senior management at Ministry of Health, National Ebola Response Centre and the Head of Ebola Taskforce, namely President Koroma.

The missing Ebola funds were huge amount which could otherwise have been invested to enrol all the children of Sierra Leone into school and provides the urgently needed universal health care for every Sierra Leonean.

The questions Sierra Leoneans should be asking are: "who built the house, who allowed it to catch fire and how are we going to rebuild the house so it never catches fire again?"

Is it all President Koroma’s fault?

RightsWay International supports the voices of reason that call for President's Koroma resignation as Chairman from the Ebola Taskforce.

ign the petition for President Koroma's resignation from the Ebola Taskforce by liking this page: https://m.facebook.com/profile.php?id=1537577479834062

All Nurses and Doctors

All Walks of Life

END
RightsWay International is a campaigning organisation with a group of high profile lawyers, journalists, activists and artists working in Sierra Leone and across the world. We protect civil liberties, promote human rights and justice for everyone, in the RightsWay. All media inquiries to: Email: rightsway.sl@gmail.com or phone: +232 (0)78265657 (SL) +44 (0)7944510446 (UK Int)