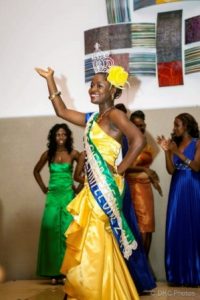 Not even the forces of mother nature could prevent the 5th biannual Miss Sierra Leone USA (MSLUSA) pageant from crowning its 2012 beauty Queen.

In an interview Thursday, MSLUSA founder and executive director Fuambai Sia Ahmadu, PhD talked about this year's pageant, the disruptive storm, her contingency plan, the eventual outcome of the pageant and charity work her organization is undertaking in Sierra Leone among other things.

You recently crowned Miss Sierra Leone USA (MSLUSA) 2012 and this year's pageant was very dramatic including serious last minute challenges.  Tell us more about the drama and how you were able to pull it off? 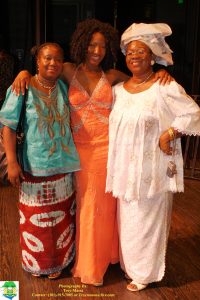 Drama is an understatement.  No one could have anticipated the natural disaster that swept us last weekend; it took us and the entire greater metropolitan area of Washington, DC by utter surprise.  We had planned in painstaking detail a grand three-day production for our 5th biannual Miss Sierra Leone USA Pageant.  We intended to use the occasion of this pageant to launch one of our organization’s original goals: to support efforts to improve maternal health and child development in Sierra Leone.  To this end, we co-sponsored the event with two initiatives in Sierra Leone, Wellbody Alliance and Johns Hopkins’ Safe Surgery and Anesthesia in Sierra Leone and invited several dignitaries and a few celebrity goodwill ambassadors on board as patrons.  The storms took us completely by surprise and the power outages, road blocks and property damages that ensued forced us to make minute by minute decisions to either go on or cancel various planned activities over the weekend.

But none of this mattered at the end of the day.  Our organization was created to recruit and support the best young women of Sierra Leone descent in the US and help develop their leadership skills and commitment to community service.  Even if it had to be in my living room, as long as the contestants and judges were ready, we were going to have a competition.  As it turned out, last weekend was truly an “act of God”.  When our venue was closed down on Sunday, July 1st, a top county official who is also an African and a good friend of mine opened up the beautiful grand ballroom (as a staging area) and elegant atrium and had workers hurriedly put together a wonderful stage, set up some chairs, an area for our food and African jewelry displays, gift bags and so on… By the time I got to the Civic Building, the MSLUSA Team –  Pageant Director, Natasha Beckley, and Event Planner, Satta Nallo, and one of our advisors, Suna Nallo, Executive Director of NOSLINA, Audrey Pabs-Gardner and others were already there playing their parts and everything just came together.  The contestants began entering the building and suddenly, from nowhere, the emergency lights went on and lit up the atrium.  We had a fabulous show and learned a lesson in teamwork, in faith that God is always in control, and as one of our impromptu MC’s Freddy Shabaka noted, “we witnessed the incredible resilience of the African Spirit” which permeated the hall that night until we crowned our new queen, Miss Freetown, Ruby B. Kamara now Miss Sierra Leone USA 2012.

Mahen Bonetti, Director of the New York African Film Festival who was one of our judges wrote to me the day after the show: “I was thinking of all the infra-structure challenges we face at home and still continue to get things done. It is ironic that when faced with a similar situation in this part of the world, the service providers go into lock-down mode and become paralyzed. Many in this part of the world have never known what it is like not to be able to automatically turn on the light switch…… I hope it was not lost on the girls (and attendees) that most people living in their motherland face these sorts of challenges every day and still continue to thrive!”

MSLUSA appears to be different, unlike other pageants where it is mostly just presentation of young scantily clad women showing off their assets in skin-tight bikinis and stuff, how different is your pageant?

As I stated earlier, our organization, MSLDC Inc. (Miss Sierra Leone in DC) was set up to help develop the future women leaders of Sierra Leone descent here in the US and beyond.  We love the pomp and stance of pageantry and thought this was a good way to attract young women, entertain the community, have a bit of fun and still get to work on solving serious issues affecting girls and women within our community.  We don’t believe in parading scantily clad young women or bikinis – to us this is simply un-African and truly unnecessary in defining who we are as women.  We give higher scores to talent and social platforms than we do to all the other segments of the pageant.

I noticed that there were only eight beautiful contestants, I am just curious why eight and not twelve to represent each district in Salone?  Where you unable to secure 12 women to represent the respective districts? 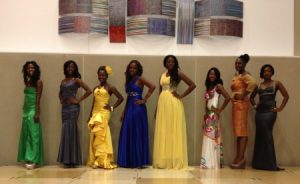 Yes, we ended up with eight very brave, resilient and determined young women on Sunday night.  We always have fluctuating numbers of contestants and up until a week or so of the pageant we had thirteen, then eleven and then after the storms hit on Friday June 30th, we were down to eight districts.  In future, we are going to spend more time connecting with Sierra Leone district and ethnic associations that are based here in the US in order to give the contestants a larger network and source of support.  The pageant process can be quite taxing and expensive for college students who have other family and social commitments and lack the resources to go all out and do what is necessary to win.

I became aware of your partnership with other organizations and initiatives including the prestigious and world renowned Johns Hopkins institution through your press release issued in early June.  How is that partnership working out?

Perhaps you can attach the link to the article you are referring to which provides more detail on the genesis of my relationship with Dr. John Sampson, who is one of the directors of the SASSL initiative.  I became closely acquainted with the Johns Hopkins team through my connection with the Sierra Leone Health and Biomedical group and as a public health advisor I have assisted this team and similar groups and individuals in navigating some of the red tape to effectively implement their projects.  I think it is absolutely important for us to encourage links with institutions such as Johns Hopkins University if we are going to build our own health research capacity in Sierra Leone.

MSLUSA is also partnering with some celebrities.  And of course, I am sure that you are aware of the controversies surrounding celebrities going to Africa to exploit "the issue of poverty and nutritional deficiencies in African children" so as to boost their images, careers and fattened their bank accounts but they don't do anything beneficial for the host countries.  So, the question is with all the controversy, why is your organization still partnering with celebrities?

One of the articles I wrote for the MSLUSA pageant magazine concerns the issue of celebrities and their humanitarian work in resource poor countries like Sierra Leone.  While I am aware of a lot of the criticism I think they should be judged on an individual basis.  A few of the celebrities that work in Sierra Leone do so quietly and try to downplay media attention while they go about their business riding poda podas, bush taxis and camping out in village huts.   I think we need to engage with those who are serious about advancing Sierra Leone and assist them in their efforts.  As cultural ambassadors, those of us who live in the US have a lot we can teach our fellow westerners about our own cultures and societies.

I came across an article in the British medical journal The Lancet Volume 377, Issue 9775 on page 1393 titled "How did Sierra Leone provide free health care? Basically, talking about the current administration of President Ernest Koroma's implementation of free health care for pregnant women, new mothers, and young children in April 2010.  While government officials and pro government newspapers are praising the new and improved health care delivery in Salone, critics and opposition party leaning publications are reporting the health care system is in dire straits.  From your recent trip to Sierra Leone for a biomedical conference in Freetown and as a health professional what are your observations or unbiased opinions on the current health care system in Salone?

I don’t think anyone can claim to be unbiased about anything, myself included.  But, I do think it is clear through recent statistics that maternal and infant mortality rates have turned around quite dramatically since the implementation of free health care for pregnant women, lactating mothers and children under five.  There is also clearly a lot of work to be done to bolster the efforts of Government – hospitals need supplies, drugs and skilled medical providers and current medical and nursing staff need further training and sensitization with regard to their interactions with patients.  This is why MSLDC Inc. is committed to doing our own small part as a small nonprofit organization and we encourage our young women to also get involved in advancing their own initiatives and seeking collaborations inside Sierra Leone.  If we are going to see a complete turnaround in maternal child health in Sierra Leone, we ordinary citizens – especially those of us residing in the diaspora – have to make it a number one priority to do our own part.  The Arc of Hope is a good example of a diaspora initiative and there are so many medical missions that provide critical services to women in Sierra Leone.  Advancing maternal child health in Sierra Leone is beyond politics; this is an agenda that we must all be committed to.

Lastly, with your education and qualifications you could be working for corporate America earning six figure income but here you are in Washington, DC indulging in women issues and charity work, why?

It’s never been my ambition to work for corporate America.  I think it is an incredible blessing for me to be able to use my education and experience to do what I feel most passionate about.