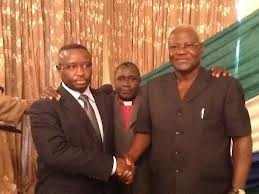 With a toothless official opposition, Sierra Leone seems to be slowly slipping back into a one-party state. President Koroma hasn't locked up his critics, but he is adept at undermining democracy by cannibalizing the opposition through state-induced defections

At first glance, the West African state of Sierra Leone looks like an impressive exercise in democracy. Eleven years after extinguishing the flames of its civil war, Sierra Leone has conducted periodic elections, followed by the transfer of power from one political party to another. A critical look at Sierra Leone will, however, reveal a recidivist State, slowly reverting to one-party dictatorship.

Sierra Leone's journey toward democracy began to stall after the All People's Congress (APC) won the presidential contest that brought Ernest Koroma to power in 2007.

President Koroma presides over a political system that advertises itself as a democracy, without necessarily stooping to observe the rules of democratic governance. Democracy, they say, takes root by thriving in an emporium of ideas, where an active opposition exists to probe and check government at all times.

The reasons behind this democratic deficiency are twofold. The opposition's political recklessness, which has prevented it from withstanding the tests of time, partly explains the SLPP's near-impotence.

Long before its electoral defeat in 2007, the SLPP was in control of Sierra Leone, steering the country with all the executive might of the presidency. If the party's thinkers were not so shortsighted, the SLPP could have used its numerous years in power to girdle itself with the political infrastructure needed to stay afloat, even after losing power.

Unfortunately, Sierra Leonean politics is a unique domain, through which neglectful men can destroy an entire country without the slightest sense of regret.

After spending more than a decade in power, the SLPP lost the presidency and retreated into opposition as a visionless political party, cash-strapped and bereft of practical ideas. Reduced to a mere skeleton – both in terms of funds and the ability to hold itself together – the SLPP exists as a chaotic opposition, powerless against President Koroma's transgressions.

HOW TO KILL DEMOCRACY IN ITS INFANCY

Apart from the opposition's serial incompetence, President Koroma has his own way of dismantling the fledgling, democratic institutions that brought him to power. The APC, which the president leads, is a political party that knows how to fight for, and keep, political power.

Dismally enough, the APC lacks the corresponding ability to operate in a lawful, democratic society. For most of its five decades of existence, the APC has practised nothing but one-upmanship, mostly occasioned by brutal, one-party rule.

After inheriting, in the 1960s, a political system that could have flowered into a viable democracy, the APC aborted plural politics in Sierra Leone by imposing a one-party dictatorship on the country.

In its desperation to keep power at all costs, the APC framed and executed its enemies with extrajudicial efficiency. Although he has so far avoided the temptation to throw his opponents in jail, President Koroma remains committed to his party's penchant for destroying the opposition.

Driven by pure guile, President Koroma undermines democracy by cannibalizing the opposition through state-inspired defections. With the national treasury at his disposal, President Koroma did not hesitate to entice members of the government to engage in political defections before, and during, last year's presidential election.

In a country where politics is about self-enrichment rather than national service, President Koroma easily turned the elections into a shopping spree, buying lots of feigned loyalties from the men who were willing to sell such perfidious allegiances.

For example, the current Minister of Trade and Industry, Mr. Usman Boie Kamara, was a high-ranking member of the opposition. Unable to assume leadership of the SLPP, Kamara swapped horses in midstream, abandoning the opposition for President Koroma's tempting "incentives."

By the time Sierra Leone went to the polls in December 2012, democracy was already limping thanks to the wounds inflicted on the opposition by high-ranking defections.

When politicians hijack democracy and turn it into a charade, the people lose. Without an active opposition in parliament or in the realm of public relations, Ernest Koroma essentially rules Sierra Leone like the lord of a fiefdom.

Since there is no credible opposition to make the president and his cabinet answerable to the people, scandals and political improprieties are never investigated in Sierra Leone.

Last year, for example, Sierra Leone was hit by a cholera epidemic that killed hundreds of people. For a government that rapidly creates ministries and appoints unqualified personnel to run such ministries, the outbreak of cholera should have urged the president and his Minister of Health to explain to citizens why their country was being ravaged by a preventable disease.

In a real democracy – where the opposition is good at sensitizing the people against political incompetence – popular anger would have nudged the president to either dismiss his Minister of Health, or tell the nation what the government was doing to prevent – or at least minimize – future outbreaks of the disease.

Without opposition or public outcry of any kind, the ubiquitous cholera killed hundreds of people before running out of steam. How can a country be so wretched?

Even as President Koroma's oversized cabinet and bureaucracy prepare Sierra Leone for bankruptcy, the opposition remains quiet, completely ignoring its responsibility to tell Sierra Leoneans that a huge cabinet can lead a poor country to insolvency, and, ultimately, instability.

Recently, when Mabang Bridge collapsed and killed dozens of Sierra Leoneans, there was no credible opposition to shame the government into explaining why a bridge that should have been repaired ended up collapsing and killing scores of citizens.

Any society with a politically educated opposition would have demanded answers on behalf of the people, thereby compelling the government to repair the bridge.

The president, under the people's pressure, could have dismissed the government minister in charge of the bridge. If it turned out that funds had been disbursed from the repair of the bridge, a law-abiding society would have taken the offending minister to court, charging him with culpable negligence that led to the deaths of several citizens. An effective democracy is supposed to work with, and for, the people.

A political system in which the opposition challenges the government during elections only to stop functioning immediately afterwards is not a democracy.

Last year's outbreak of cholera, which killed hundreds of citizens, and the recent Mabang Bridge incident, which also killed several people, are just two examples in a chain of presidential failures for which no one has been held accountable.

A political system without an active opposition is not a democracy. Equally true is that a society without the rule of law is not a civilized one. The whole rationale behind democracy is based on the precept that the rule of law must prevail over the whims of national leaders.

In Ernest Koroma's Sierra Leone, the pretence exists that the country is a democracy. The absence of a credible opposition, however, leaves the country with a 'democracy' that is neither accountable to its people, nor conducive to the rule of law.

As a consequence, we have an oversized cabinet that will cripple the country, an unchallenged president, and a political class that may never feel any pressure to address the scandals threatening our national recovery. The political system in Sierra Leone is too uncommunicative, and certainly too lawless, to be called a democracy.