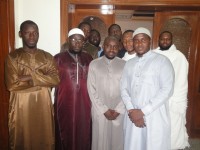 Sierra Leonean students from Madinah and Riyadh have arrived in the Holy City of Mecca to help the pilgrims from Sierra Leone.
Mohamed Sahid Badamasi is the Secretary General of the Sierra Leone Students Union at the Islamic University of Madina and on arrival he explained how prepared they are to serve the pilgrims in different ways.
“We look at it as a duty, a holy one. We can’t describe our happiness every time a pilgrim thanks us after we serve him/her. We like it and always enjoy doing it.”
Zackariah Musa Barry is the Vice Chairman of the student body at Imam Muhammad Ibn Saud Islamic University in Riyadh. He also said on arrival that they feel honored to be given the golden opportunity by their embassy to serve their pilgrims, describing it as a humanitarian act.
"We feel proud when we see a pilgrim raising his/her hands in the air and praying for us as a way of thanking us for help rendered to them. To us, it's better than giving us money.
These youngsters and other nationals resident in the Kingdom of Saudi Arabia have proved their dedication and sincerity in serving pilgrims over the years.