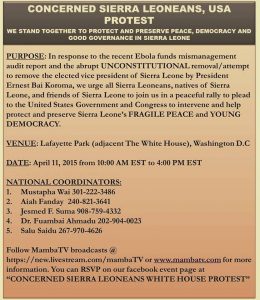 For the first time in recent memory, Sierra Leoneans in America will protest against a sitting president of their country.

A group calling itself Concerned Sierra Leoneans, USA, say they will rally on Saturday at Lafayette Park a stone throw away across from the White House in Washington to protest what they describe as the Sierra Leone government’s outrageous mismanagement of Ebola funds and the unconstitutional removal of elected vice president Sam Sumana from office.

The group is seeking an intervention by the United States Government and Congress to help safeguard Sierra Leone’s fragile peace and democracy by pressuring President Ernest Bai Koroma to rescind his decision of dismissal and duly reinstate Mr. Sumana.

It is doubtful whether the United States will intervene after its refusal to grant Mr. Sumana’s request for an asylum on Sunday, March 15, 2015 urging Sierra Leone’s government and its vice president to resolve their differences through the rule of law.

Actually, I don’t think the U.S. will intervene until there is a reason to do so.  If Sierra Leoneans go quiet and let EBK do whatever he wants, U.S. will not lift a finger,” Mustapha Wai, a Virginia based Sierra Leonean Certified Public Accountant and protest principal organizer said in a statement.  “Saturday’s demonstration is to let the United States of America know that majority of Sierra Leoneans condemn the action and are not about to let the president get away with ‘setting up such a bad precedence.”

Mr. Wai said he believes “President Koroma has clearly circumvented the constitution of Sierra Leone and that it is incumbent on Sierra Leoneans to stand up for what is right and ensure rule of law, multi-party democratic dispensation, good governance and accountability prevail.”

The Supreme Court of Sierra Leone convened in Freetown Thursday to begin an injunction petition hearing filed by attorneys for Mr. Sumana last month to prevent Ambassador Victor Foe from acting as vice president until the court rules whether or not President Koroma acted within the constitution of the country.

Ambassador Bokari Kortu Stevens is Sierra Leone’s current Ambassador accredited to the United States of America since 2007.  During a phone interview from Freetown where he is on official visit, he provided the following reactions.

“Really, I am not sure about Saturday’s rally as I told you I am in Sierra Leone at the moment.  But most of the guys organizing that rally are people from the opposition Sierra Leone People’s Party (SLPP).  I know them by name and know them by their faces, though there are few other Sierra Leoneans who are demonstrating.   The United States is a free country people have the right to protest and I think they’re just exercising their rights,” Ambassador Stevens asserted.

When asked if the Sierra Leone Embassy in Washington plans a counter-demonstration, Ambassador Stevens emphatically said, “No way, the embassy doesn’t engage in planning counter rallies.  We are not engaged in that; the embassy is not there to function in that particular pattern.  As I tell people very often the embassy is there to serve the Sierra Leone community.  I am an ambassador for all Sierra Leoneans; I am not an APC neither a SLPP ambassador.  The APC Branch in the United States is planning something, I don’t know about that but I think they also have a right to protest if they want to,” Ambassador Stevens said diplomatically insisted.

The rally has become very contentious between Sierra Leoneans living mostly in the eastern United States.

Sierra Leoneans For Peace Standing With the President, a second group consisting of members of the ruling All People’s Congress (APC in North America) is organizing a counter protest at the same venue on the same date to foster “the interest of peace, good governance and respect for the justice system in Sierra Leone.”

However, Michael Litterst, Public Affairs Officer of National Park Service, National Mall & Memorial Parks in Washington, DC said during a phone interview on Wednesday that he is not aware of a permit issued to Sierra Leoneans for Peace Standing with the President to protest at Lafayette Park.

Meanwhile, members of the National Coordinating Team for Concerned Sierra Leoneans USA after a logistics meeting with the National Park Police in Washington on Wednesday issued an advisory stating  they were assured by Park Police that, “No other organizations have been or will be issued permit for The Lafayette Park on Saturday, April 11, 2015.”

The sacking of Vice President Sumana has created a stir, agitating a large number of Sierra Leoneans from Kono District in Eastern Sierra Leone where Mr. Sumana hails from.  The Kono Union USA organization condemns his dismissal in a press release and calls for his immediate re-installment.

“I accepted the invitation to get involved in the April 11 protest at the White House as a national coordinator as a way to channel all of my anger and feelings of powerlessness over President Ernest Bai Koroma's flagrant breach of Sierra Leone's constitution in firing the sitting Vice President, Alhaji Sam Sumana,” said Fuambai Sia Ahmadu, a Medical Anthropologist residing in Washington.

“Also, as the President of Kono Union USA, I hope that this grassroots protest next Saturday will help galvanize and unify Kono people back home and in the Diaspora so that we can more effectively challenge President Koroma's human rights abuses, including the unlawful arrests and detentions of Kono indigenes by officials within his administration,” Dr. Ahmadu added.

Dr. Ahmadu hopes their efforts on Saturday, April 11 will usher in a new chapter in Sierra Leone, one in which she expects the people for the first time will stand together across political, ethnic, regional, religious, age and gender divides “to condemn the antidemocratic actions of a sitting president.”