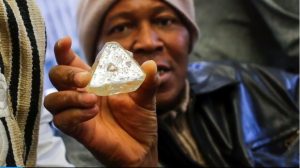 Sierra Leone’s 709 carat “Peace Diamond”, the 14th largest diamond in the world is set to go on the auction block on December 4 in New York City.

The announcement of the auction made by Martin Rapaport, Chairman of the Rapaport Group at a press conference Tuesday in New York City ends widespread speculations by Sierra Leoneans that the diamond was secretly sold by the government of Sierra Leone.

Experts from the diamond industry valued the 709-carat diamond at $50 million.  In May this year, few days before “Peace Diamond” went on auction, Lucara, a Vancouver, Canada based diamond mining firm sold an 813-carat diamond in London for $63 million. 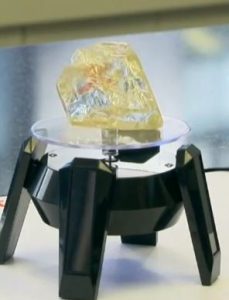 The diamond was found in March 2017 by five artisanal diggers including Pastor Emanuel A. Momoh and his wife Ruth Momoh in Koryardu village, Tankoro Chiefdom, Kono District in the Eastern province of Sierra Leone.

“This is the first time that I know of that a diamond found in Sierra Leone is being placed on a public auction by artisanal miners.  And if you imagine the fact that diamonds were discovered in Sierra Leone in the 1930s if this the process that were followed you would imagine how much benefits the diggers and the government would have gotten over the years,” Chief Saquee said at Tuesday’s press conference.

He said some of the proceeds from the sale of the diamond will enable a community of over 250,000 people in the Kono District to be able to have electricity, clean pipe borne water, schools and other social amenities.

He strongly believes his action to hand over the diamond to the government would encourage other artisanal miners/diggers to take diamonds they discover to government.

During the question-and-answer session, Pastor Momoh said the discovery of the diamond was a blessing and gift from God because he was two to three months behind in his tithe – one-tenth of his earnings that he pays to his church.

“First of all as a pastor I want to thank God for his great connection because we are so many that are engaged in mining.  The process is so transparent it gives me confidence.  This diamond represents our hope for a better future as the resources of Sierra Leone fund growth, development and jobs,” he said.

When asked what gave him the confidence to take the diamond to Chief Saquee v?  Pastor Momoh said his confidence is trust, he has a lot of trust in the chief and have known and studied him over the years, “he is not a man who mixes matters, he is a straight forward man and he likes to say the truth and he will give you what belongs to you,” Pastor Momoh concluded.

Dr. Ernest Bai Koroma, President of Sierra Leone in a statement extends gratitude to Chief Saquee V and his people for not smuggling the diamond out of the country assuring the diggers/miners who found the diamond that they will get what is due to them.

But there appears to be lack of trust and widespread public skepticism when it comes to how the government will share the proceeds of the sale.

Mr. Rapaport gives President Koroma the benefit of the doubt.

He acknowledged we are no longer in a world where people can simply sit back and assume the governments in Africa are corrupt, and the time is come for us to recognize and to accept the role of proper governance, rule of law, transparency and the ways that government must be responsible for the benefit of its people.

He argued it should not be up to NGOs and Charitable organizations to decide what happens with Sierra Leone.  It should be about the people of Sierra Leone benefitting from their natural resources making decisions about how those resources can best help the country.