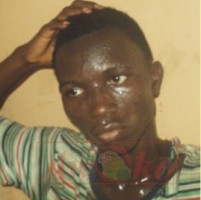 Police attached to the Kenema Police Division are currently investigating a kidnap case involving a six year-old boy of Living Stone primary school Gbanguta Street in Kenema.
According to the Police, they received a report of kidnapping from one Musa Manyeh of 6 Kaba street by Methodist secondary school in Kenema near Milton Margai entertainment centre
Manyeh is a businessman who trades in timber at Koker Jah street in the city centre.
He says he received a phone call from an unknown person who allowed him to hear the voice of his son Mohamed Manyeh , and he was told that his child had been kidnapped and unless he gives them Le16 million Leones his child will not be released and that the child will be killed, if he comes to them in the company of any other person. The kidnappers told him that he is to meet them in Bo at a Benimix field near Shemingo .
He says they negotiated for the money and ended up with Le10 million which he promised to carry to take to them for his child’s release.
Sergeant 1096 Ishmeal Karankay of Interpol, attached to the Regional Police headquarters in Kenema, says the father is his younger brother, and that when he received the information, he wasted no time to inform his superior, the Local Unit Commander who instructed them to take action.
Karankay used his car, together with Ensah Kallon of the Criminal Investigation Department (CID) together with the father of the child and they all travelled to Bo city.
There was constant communication between the kidnappers and the father of the child, up to the time they arrived in Bo city at around 1:20pm. They went to the scene and police officers deployed themselves within the area, while the father went into the middle of the field still communicating with the Kidnappers.
Civilians within the area who were not satisfied with their movement within the area called the police, who went to the scene in uniform and the kidnappers called the father and told him that they will not appear because they have seen police around but suggested that they change their location to the UCC field.
They all disserted the scene and headed for UCC field while the police also went and deployed around the UCC field area, while keeping eyes on the father. The father went to the centre of the field still assuring the kidnappers that he had the money with him in his bag which was in his hand and that he is standing at the field.
The suspect then sent a small schoolgirl aged between 3 and 4 to the father and demanded the money from him, that somebody had sent her to collect the money pointing to a distance saying that the person is standing somewhere near there waiting for her.
However, the father replied that he will go with the child so that the money will be safe. While moving towards the kidnappers, the police officers together with a motor bike rider that was with them who knew the child saw the child and signalled to the child not to talk. On arrival at the spot, the father saw his child and then pretended to hand over the money while he grabbed the boy he met there while the police rushed to the scene.
The boy arrested was identified as Samuel Massaquoi who gave his address as 7 Salia Street in Kenema city. Hundreds of schoolchildren from the nearby secondary school rushed to the scene and had wanted to mob the kidnapper, but the police moved the kidnapper out of the scene to the Kenema police station.
Massaquoi revealed that he was sent by a man name withheld, whom is in hiding, who earlier told the small boy to follow him to go and buy a shoe for him. The boy says they passed a night at an unfinished building in Bo city and he did not eat.
Hundreds of residents in Kenema city are now rushing to the police station to set eyes on the kidnapper and the child.