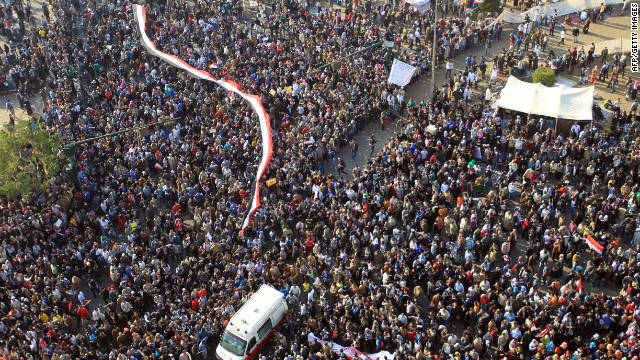 Cairo: Egypt's prime minister appealed for calm and asked protesters to return to their homes Tuesday following four days of violence in Cairo, a day after the nation's Cabinet offered to resign. "We have met the demands of the people and submitted our resignations," Prime Minister Essam Sharaf said, according to Egypt's Nile TV. "Now please put the interests of the country first."

Fresh violence broke out near the city's Tahrir Square on Tuesday. For several hours, protesters hurled stones at police and chanted, calling for the downfall of the Supreme Council of Armed Forces. The military-led government began leading the country after protesters ousted former President Hosni Mubarak in February. Demonstrators apparently tried to defend Tahrir Square as they faced off with police on a connecting street. The square was once a hub for the movement that led to Mubarak's ouster and is now a center for the protests against Egypt's military rulers. Egyptian police responded with tear gas and rubber bullets, forcing protesters to retreat briefly before they returned with renewed intensity. Violence also spread to other parts of Egypt.

Field Marshal Mohamed Hussein Tantawi, head of Egypt's Supreme Council of the Armed Forces, will address the nation Tuesday, according to Egyptian state broadcaster Al Masriya. The latest report contradicted an earlier one saying he would speak "shortly."After Mubarak's fall, military leaders took control with the promise that eventually a civilian government would be elected and take over.

Military leaders still say they will hand over power to a new government when one is elected. However, while parliamentary elections are set to take place November 28, a complex electoral process follows, and presidential elections could be a year away.

Demonstrators say they are concerned the military, which would continue to be Egypt's top authority until a president is in place, wants to keep a grip on the country. Many also have voiced anger about a proposed constitutional principle that would shield the military's budget from scrutiny by civilian powers. They say they worry the military would become a state within a state.

On the streets of Cairo, some protesters have gone further, shouting that they believe Mubarak is running the military council and, in fact, the entire country from prison. He and his sons Gamal and Alaa face charges of corruption and of killing protesters.

Three Americans were arrested Monday outside the Interior Ministry in Cairo. Authorities accuse them of throwing Molotov cocktails, said Adel Saeed, a spokesman for the office of Egypt's general prosecutor.

David Lynfield, deputy press officer in the U.S. Embassy, said the "claims are being currently investigated." The young men are students at American University in Cairo, said university spokeswoman Morgan Roth. Two were identified — Gregory Porter, 19, of Glenside, Pennsylvania; and Luke Gates, 21, of Bloomington, Indiana. The university is working with the U.S. Embassy, Roth said, and is attempting to gather details and notify the students' families.

Tuesday's violence marks the fourth straight day of clashes between security forces and protesters, days ahead of the planned parliamentary election. Twenty-nine protesters have died in the clashes since Saturday, said Hisham Sheeha, spokesman for Egypt's Health Ministry. About 1,785 people have been injured, he said.

Earlier, Dr. Adil al-Adawi, another ministry spokesman, said about 200 of those injuries came on Monday. Egypt's Interior Ministry said 102 officers and conscripts have been injured, with wounds ranging from gunshots to burns from Molotov cocktails. One officer was shot in the head.

Some political factions have vowed to hold a sit-in Tuesday at Tahrir Square, demanding the immediate resignation of the Supreme Council. They also demand the immediate punishment of those who have killed protesters in the past few days.

The Alliance of the Revolutionaries of Egypt is calling the event a "million man sit-in." The Muslim Brotherhood, one of the largest organizations in the nation, has said that its members will not join that protest.

"We didn't start this mess," said engineering student Mahmour Radwan, who traveled to Cairo from Alexandria on Tuesday with two friends to join the protests. He said authorities started it, when they killed people "and put them in the street." Radwan and many other protesters were equipped with surgical masks and other items in an attempt to protect themselves from the clouds of tear gas. Young women stood nearby, holding bottles of water and poised to treat those overcome by the tear gas.

Violence also spread to Alexandria ahead of a planned "million man" protest there. One person was killed and 60 others injured in that city, al-Adawi said. Thousands of people clashed with police Monday night near the city's police headquarters. Rocks were thrown and tear gas used, said activist Huda Al-Sadani. Some people were arrested, Al-Sadani said, and clashes continued throughout the night.

Amid the unrest, Egypt's Cabinet offered to resign Monday night. Justice Minister Mohamed Abdelaziz al-Juindy explained that this move to quit the government was driven by opposition to the security forces' crackdown on demonstrators. "I resigned because of the events in Tahrir (Square), because of the political responsibility," al-Juindy said. The Supreme Council has not said whether the resignations were accepted. As the potential political shuffling played out, animosity and violence continued to simmer in the streets.

Saeed, the spokesman for the general prosecutor's office, said 127 demonstrators who had been arrested in Cairo since Saturday have been released. Another five have been "detained temporarily for further investigation." The military council has said on its Facebook page it is "extremely sorry for what the events have led to." And spokesman Maj. Mohamed Askar noted late Monday that the Supreme Council has ordered a fact-finding mission to assess what has happened.

Moreover, the Supreme Council also is calling upon "all political forces to hold dialogue as soon as possible in order to address the escalation" of unrest, Askar said. Yet such pledges didn't appear to resonate much with those around Tahrir Square.

"People here feel that they have been cheated and that they have moved from an autocracy to a military dictatorship," protester Mosa'ab Elshamy said. "So they are back to the square — back to square one — to ask for their rights once again."

The Supreme Council, "in the name of ensuring security and stability … (has) committed numerous human rights violations, ignoring the very demands for social justice and fundamental freedoms that triggered the uprising," Amnesty International said in a report issued this month on the situation.

"… Since assuming power in February, the Supreme Council of the Armed Forces has repeatedly pledged to break the cycle of repression entrenched over the past 30 years. In reality, however, it has resorted to familiar patterns of abuse." A recent endorsement in full of Egypt's emergency law and its expansion, after it was restricted last year under Mubarak, is considered the largest example of human rights violation, the organization said. However, it alleged demonstrations have been violently dispersed and protesters have been arrested, detained and tortured "before being tried unfairly before military courts and convicted."

"If the hopes of the uprising are to be realized, urgent action is needed now to ensure that one repressive rule is not simply replaced with another," the report said.  With citizen activists again at odds with security forces in Tahrir Square, the scene this week in many ways resembles what happened in February.