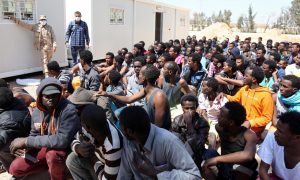 The African continent is hugging the headlines today, but relatively for the wrong reasons. With the dust seemingly settling and the waves apparently ebbing away, the dearth of emotions that has recently coursed through Africa and its people, has ironically generated another 1884-like “Round Table Berlin Conference”; a conference that saw the continent dissected into chinks and chunks, from which we are still grappling for our identity on many fronts. Today’s “round table conference” minus Otto Von Bismarck,  by the European Commission is  proposing organised legal means for migrants to come to Europe so they do not turn to traffickers. The proposed measures are the latest EU steps to stop migrants drowning in the Mediterranean (BBC). The foreign policy chief, Federica Mogherini, is asking the UN Security Council to permit the use of force against people traffickers operating out of Libya. These proposed plans have come against the backdrop of increasing number of casualties and deafening calls on the international community to "dramatically expand search and rescue operations". Having cut them last year, European countries have already agreed to expand rescue services.

There are a lot of political and humanitarian bystanders who would want to see this as a “eureka moment”. But amidst all the horror stories and human tragedies relayed on the small screens on a daily basis, a high number of migrants continue to “risk it all” to make the perilous journey. Many will see this as a mark of desperation, while it remains tempting to consider it suicidal. Before we run the rule of morality or part company with reality, it might help if we stop for a minute and ponder “What drives a person to take such a death-enticing adventure?” if we can call it that. With Libya transformed into the staging post for the great Mediterranean Sea faring community; a country that was successfully transformed from being  one with the highest standards of living, to one that is littered with stories of abduction, rape, torture, ISIS etc., by you know who, there is little wonder why today’s Libya is enough to induce suicidal tendencies. With people smugglers systematically abusing migrants in appalling Libyan migrant detention centres, one Syrian family’s interview that "We were facing death in Libya so we thought we might as well face death in trying to get to Italy," clears up any doubts as to why they are left with no choice but to attempt these perilous voyages.

The search and rescue is a good humanitarian response but it is neither a long term, nor a logistical answer. If anything, it is more of sticking a plaster exercise. Others might say that it is a manifestation of a bout of conscience. This is a sad case of reality, that despite this episode of human tragedy that is recording a titanic (excuse the pun) death toll in watery terms, the “refuseniks” continue to make the death defying and near suicidal journeys to the West. Despite all the horror stories, the sufferings and warnings, it may sound dismissive to suggest that  temporary insanity is what drives our able-bodied men and women to such dire straits; which carry all the hall marks of certain death. As the death toll continues to rise, and the politics of finger pointing goes into overdrive, it is “People smugglers” like 27 year old Tunisian, Mohamed Ali Malek, who could be charged with homicide and people trafficking. People like him have become easy prey, scapegoats and the small fishes in a global pond. But ask the desperate migrant and he would tell you that Mohamed Ali Malek is their modern day Moses. Not that I condone it, but I am trying to stay friendly with reality.

There may be numerous reasons and causes for the human tragedy that is unfolding before our eyes today, but these can be safely narrowed down to the twin forces of Western foreign policies and home-made corruption. We know that western governments don’t have permanent friends but permanent interests. So what about those who bombed Libya and never stayed around long enough or turned to see what it looks like?  The end of the Cold War has seen a comparatively marked decline of western interest in Africa, so I heard. Our continent shamelessly boasts of the highest prevalence of institutionalised corruption on the planet. With the Chinese having more slush cash to throw at corrupt African governments with no political strings attached, it is not surprising that the post-cold war political bazaar has degenerated into what is clearly social engineering.

During the cold war era, the West’s involvement in Africa ensured that their African stooges toed the line, and a semblance of political caveats like respect for the law, freedom of expression, democracy etc., were all wrapped as requirements for the entente cordials for economic co-operation. But with the focus ironically switching in the last 10 years to the agenda to re-civilise the inventors of civilisation; an ongoing feat that has been erroneously referred to as “ The Arab Spring”,  it is little wonder that the Chinese have unsuspectingly occupied the vacuum that was left by our colonial masters . Democracy, freedom of speech, the rule of law, human rights etc. are the most infrequently used in the Chinese vocabulary. With Chinese money flowing around, it is not surprising therefore that some African heads of States like Mugabe have survived the much misguided, ineffective and ill-conceived sanctions against their countries. Others can even afford to remove themselves from the committee of Commonwealth Countries and still continue with their despotic rule. The Chinese don’t care about how you govern your people, as long as you sign on the dotted line to mortgage your country.

West African heads of states recently treated us to a jamboree of what political enlightenment would look like. We have seen what happens when our leaders try to doctor their national constitutions. It happened in Cote D’Ivoire, Burkina Faso, Senegal and most recently and ongoing in Burundi.  Like lightening on a dark September African night sky, and as if on cue our West African heads of states proposed and debated in a recent meeting to enshrine a maximum of only 2 five-year terms of rule. Surprise, surprise, it was rejected. Interestingly, some of us never held our breaths. Why would anyone expect turkeys to vote for Christmas is anyone’s guess?  At this stage, we don’t expect foxes to vote for the welfare of chickens; but it was a start. Thank God my president, Ernest Bai Koroma is not bidding for a 3rd term. He hopes to retire in his little village in Bombali, come 2017-18. The World Best does not even want extra time in this APC Cup Final.

Corruption breeds war. Corruption breeds terrorism. Corruption breeds migration. Corruption breeds poverty. Corruption breeds hunger. Corruption breeds corruption. It is sad to admit that war, terrorism, economic migration, poverty, hunger and famine have become the hallmarks of our continent today. And the common denominator for all these? CORRUPTION. It is the institutionalised corruption of the majority of our leaders that is driving these men and women to near certain death. A simple psychosocial/risk assessment of any of these voyagers at the port of embarkation will clearly reveal a mind of suicidal ideation. For someone to accept that such a journey is 90% sure of certain death, and still persevere to embark? There must be a death wish lurking within. This just shows that they would rather die trying, than live in such conditions in their respective countries of origin. If you think that it is the lure of the bright lights and gold paved streets of the West that is stronger, try Eritrea where anyone aged 18 and above is mentally, psychologically and emotionally engineered into a militarised zombie; by virtue of enforced conscription. Our leaders just need to lead the war against corruption; and we shall all live happily ever after.

But Africa is one continent that is never short on ironies. My grandfather once told me that his great grand ancestors were captured, corralled, whipped, shot, bound, gagged, shackled and decked into the inner bowels of the slave ships. They were exchanged for rum, gunpowder, cloth, battery pan etc., before being shipped to the plantations in Europe and The Americas. That was over four hundred years ago and it was not voluntary. Four hundred years on and counting, history is repeating itself. I am volunteering and I’m ready to die, to make the same perilous journey. This time, I am paying for the pleasure by selling my family heirlooms, family land, taking a loan and selling my soul to land in Lampedusa. Now you believe when I told you that my Africa is never short of ironies.

Some will say that   "It's better to light a candle than curse the darkness. My pen is weeping and I must stop here.