Sierra Leone is a nice country for many reasons; it is one of the few countries where political irony (ies) and coincidence form the fabric of humanity. The recent elections held in this tiny West African country produced many theories wrong. As the election campaign rages on, pundits, cynics and skeptics doubted the competency, tenacity and moral efficacy of some leaders to even think of occupying the most coveted seat in the state. On air, some described the Flag bearer of the SLPP, Maada Bio’s ascendancy to the presidency as unthinkable. A prominent talk host radio commentator, David Tam Bayoh who boasted of spending twenty five years in politics predicted a landslide victory for the ruling APC, based on his experience. Rather, disappointingly, his predictions fell on Bomeh slum. Many of the Fourth Estate joined the race and cast their nets around the ruling APC party candidate as the favorite. The rest is history…. 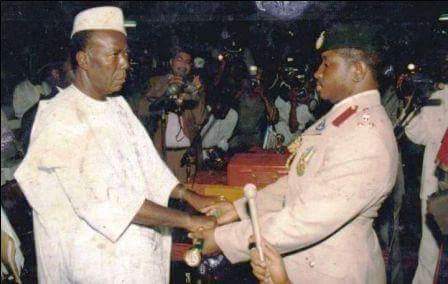 Sierra Leone is a place where all things are possible. Who would have thought that the likes of Dr. Abass Bundu will bounce back from his political wilderness to occupy the powerful position of a Speaker in the land? Who would have imagined that history will repeat itself by witnessing a “coupist” who handed power to a democratically elected power, and still return to receive power from an elected democratic government? Who would have thought of seeing the former Junta Leader, Valentine Strasser, being invited to witness the inauguration of his erstwhile Deputy who overthrew him? This country has many ‘box up, mix up’ intricacies.  For Sierra Leoneans to see Valentine Strasser being invited to the opening of parliament and the inauguration at the National Stadium speaks volumes of the magnanimity of Maada’ politics.

Is Maada the Abiku of Sierra Leone? ‘Abiku’ is a Yoruba name for a spiritual child that dies and returns to the same mother. According to Yoruba mythology, Abiku refers to a child who dies repeatedly before puberty. In this poem, “Abiku” by Wole Soyinka, the child mocks the object used to confine him to earth. The bangles and charmed circles refrain him from dying.  Maada seems to befit this nomenclature appropriately. He handed power and tried on two occasions to clinch power but to no avail.  When Barack Obama won the presidency on a Tuesday night in Chicago, his opening words were, “If there is anyone out there who still doubts that America is a place where all things are possible, who still wonders if the dreams of our founders is alive in our time, who still questions the power of our democracy, tonight is the answer”.  Maada, a coupist, a quiet student who went through the rigors of western education will say, yes I TOLD THEM I WILL BE BACK AND I AM BACK!   Maada proved many critics wrong including some of his own party stalwarts who defected and formed another political party. His unwavering belief in himself was stunning; to say the least, his interviews before the elections were appalling especially the BBC interview, his answers to questions about his abhorrence to violence is unsatisfactory and yet he continued to reassure the nation that should the elections be held in a free and fair climate, he will win. Maada was never the likeliest candidate; he didn’t start with much money or endorsements. His campaign was not hatched in Freetown, rather it began in the backyard of the ordinary masses in Kailahun, Bonthe, Kono, Bo, Koinadugu, to name but a few. His party, SLPP had men and women who dug into what little savings they had to give to the cause. The diaspora fought very hard to organize conference calls, meetings fundraising dances to raise funds for the campaign. The campaign drew strength from the not-so-young people who braved the tentacles of the APC regime to campaign from door to door of strangers, university students who organized support groups to disseminate the Bio’s message of ONE COUNTRY, ONE PEOPLE syndrome. 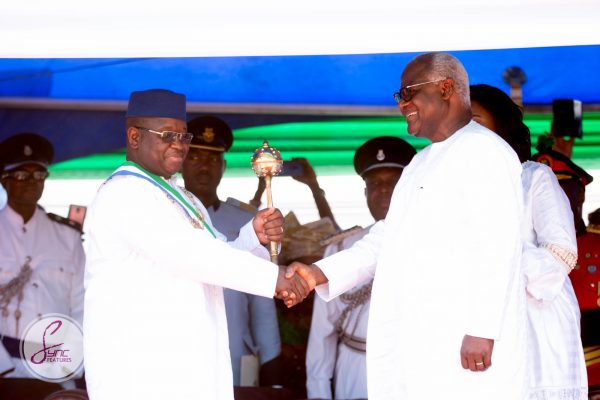 he less written about Maada’s opponent in the election, the better it deserves especially from the main opposition party, the APC. A party whose leader, Ernest Koroma did extremely well in his first term in power. The question that continues to remain on the lips of many Sierra Leoneans is: did politics transform Ernest Koroma or Ernest Koroma transformed politics? That could be a question for historians.

Maada is back and this time, he seems to stay beyond three months in power. The greatest enemy of Maada will be himself. Considering the inefficiencies, ineptitude and bloated corrupt scandals that engulfed the Koroma’s presidency in the second term, it is left with Maada to see the reasons why he would commit the same mistakes as his predecessor. To castigate the former president of not transforming the country is an understatement. Ernest Koroma’s agenda for change in the infrastructural development should be strengthened by the Bio presidency. The enormity of the task that lies ahead are enormous—the economy, unemployment, poor standard of education etc. There is a new energy to harness, new jobs to be created, new schools to build especially the introduction of the free education.

Though the country is reeling from naked blackout in the early presidency of Maada, the spate of corruption, lawlessness, indiscipline and downward trend of our educational standards will be the major priorities of his government.  Sierra Leoneans should summon a new spirit of patriotism, or responsibility where each resolves to pitch and work harder and look after not only ourselves but each other. The country should rise or fall as one nation, as one people. The people should resist the temptation to fall back on the same partisanship, immaturity and pettiness that has poisoned the politics since independence.

Maada should now focus on his opponents as friends and not enemies.  The president should open doors of opportunity and restore prosperity that promotes the cause of peace so as to maintain the Sierra Leonean dream of living together as a nation.