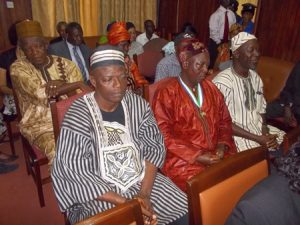 When did you last visit Koidu town?  To say Koidu town is in a mess is an understatement and it has nothing to do with the ruling APC government. Just last week, I read a piece in the Awoko newspaper citing Chief Kamachende lamenting about the deplorable state of the construction of the roads in the township. According to Chief Kamachende, he was not consulted before the contract was awarded and as a result he is unaware of the state of the road maintenance. What a shame? What is Chief Kamachende insinuating? Because he was not consulted, he has no right to enquire about the state of the contract? Is he not one of many chiefs in the district? As a patriot and son of the soil, is it a crime to ask about the development of your district? This is ridiculous and shameful on leaders whose mandate is to seek the welfare of its people.   Interestingly, the Kono chiefs have played politics too well with all previous governments since independence. Instead of the chiefs converging to form concrete developmental programs, rather some of them are bent on pocketing largesse from mining companies leaving the thousands of residents to   bask in poverty. It is therefore not surprising that the road to Kono and within the township has been unattended to for over years. The lackadaisical attitude of Chief Kamachende towards his own motherland speaks volumes of insincerity and the way some of the chiefs view the development of Kono.

Other big cities like Bo, Kenema, Makeni have made it through the recession in one piece. Kono has been speedily receding into oblivion. During the days of the National Diamond Mining Company , the whole country envied the Kono people as some thought the land will be paved with blessings from the diamonds rather it developed into a curse. The chiefs would line to receive packages and kickbacks for personal emolument instead of embarking on developments. One may argue that, the former chiefs were uneducated and old and were incapacitated to implement developmental ideas, but alas, it seems the present crops of chiefs have just changed clothes (and pretty nice clothes they are).  Aside from the wealth of the district, the single defining feature of Kono is its youth. Most of the people who have moved to Kono since the end of the war have been under 40; the region has the highest percentage of 24- to 34 year olds in the country. The land is a mecca for young people and has been dubbed as the conveyor belt of fortunes.

In the early days of the rebel war, the Kono people suffered humiliation more than any other section of the country. Not only where their chiefs killed by rampaging NPRC rag-tags soldiers (Chief Mbriwa)  who accused the chiefs of selling their land to the rebels of the RUF, the people were  also  molested on a  daily basis as they try to return to their ancestral land. Whilst the chiefs were silent, the soldiers coined an operation to fleece the wealth of the land by ‘cleaning the land’. With these heinous lessons, one would expect the chiefs to embark on programs aimed at developing their land so as to shame the devils.  The land has an embarrassment of talents that can develop the land with the backing of the chiefs but nothing seems to be sprouting as some of the chiefs are static and selfish.

Quite recently, a contract was awarded to a sitting Member of Parliament in Kono to build a school. Guess what, the school was never built and the money went on vacation .Guess what did the chiefs do?  As usual, let the sleeping dogs lie. Do the chiefs want the central government to do everything for their land? Are the chiefs of Kono really copying the examples of other districts? Take a look at places like Bo, Makeni, Kenema and  see the moves made by their Chiefs.  This has nothing to do with the central government.  In the early days of the 80s and 90s, the erstwhile Kono District Chairman, Konomanyi  single-handedly embarked on many infrastructural developments in the township without the help of the central government. Is that not an example of a progressive oriented personality?

Kono district has been continually divided over a basic issue: development. What powers are vested in the central government and what are the limitations on the district reach? This has been the yin and yang of Kono chiefs. The pundits will wax endlessly on the political nature of the nation’s politics and accuse central governments of not doing enough for the district. This is a shambolic accusation  and it holds no strength in the common sense. The riches of the land and concession from mining companies is  enough to develop the district. This is baffling and mystifying. The Kono chiefs need to rise above the occasion and step to the podium of development and stop blaming the central government.

The present scenario is more baffling and ironical. There is some cautious optimism that, for the first time, there is the possibility of serious, substantive and sustained developments in the pipeline. Why?? Is it because the vice president and the two first and second ladies are from the district respectively? Even if the president comes from Kono with all his ministers, if the Kono chiefs fail to roll their sleeves and develop their land, nobody will do it for them.

When a nation is over-reliant on one or two commodities like diamonds, corrupt government ministers and their dodgy associates hoard profits and taxes instead of properly allocating them to schools and hospitals. We have seen it in Kono on several occasions where previous central administrations have exploited the land with the connivance of the chiefs.

As the elections draw closer, the chiefs of Kono should stop playing the blame games on central administrations failing to support developmental programs and attack the bull by its horn.

So Chief Kamachende and other chiefs should consider any development in the region as an ancestral responsibility and  stop toying with the conscience of the common natives of Kono district.