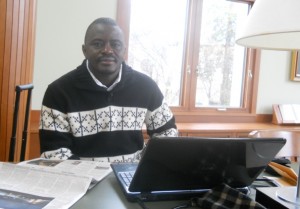 As the melodious wind sweeps through my fingers onboard the Murzuk ferry and the fantastic coastline leaving my sight, nostalgia seems to tighten my memory. Leaving this great country behind is painful. Sierra Leone is a country of tales, as the good, the bad and the ugly events occur on a daily basis.

The country is indeed a reconstructed scene with major infrastructural developments sprouting from every spheres of the country unless Kono.  Sierra Leone, particularly, Freetown is like New York and Amsterdam. The city, Freetown never sleeps on weekends with bars, restaurants and pubs standing aloof to the joy of visitors as well as indigenes. From the swamps of Goderich to the Hills of Waterloo, slums, push areas seems to be fighting for a facelift with the APC government fighting very hard to paint the country from its ruins. The people along the streets of Freetown are fighting to meet the mark of survival with gigantic buildings emerging from all corners. A close friend of mine looked at me on a Saturday evening along one of the most beautiful beaches in the world and said; sometimes deals work, sometimes they don’t. You have to be efficient to survive. That’s the way the system works here in this country. Most of the people along the streets in the city are extremely hard working and hopeful that things will change.

This country of tales is witnessing an unprecedented epoch making in the political as well as the social spheres. Leaving the city behind to visit the provinces, one gets the feeling that development is the hallmark of the APC. The towns of Makeni, Bo, Kenema seems to be the emerging facelift of the ruling party with the impression that, everybody should share from the national cake. Makeni is not only buzzing but glittering with an imposing clock tower in the middle of the town and major road constructions in the township. Bo and Kenema will soon boast of one of the best stadiums in the country, not forgetting the good roads to the cities.

On the political side, the APC party is in the middle of its own antithesis. The infighting of running mate is rearing its nasty head with insubordination and potential rancor awaiting the party. The President, Ernest Koroma is hugely popular more than the APC party. This may be worrisome and frightening for political commentators as most fear the party may slide into oblivion after the departure of the president’s tenure. The president seems to be the ‘calcium in the bone’ with its imposing and charismatic influence on every major occasion. He appears to be at every event motivating youths and well-wishers.  Though the president may not be intentionally attending events on purpose, his experience about the ‘diasporas’ revolution must have acted as a check on his political brakes. Another huge effect of the president’s popularity is the unfulfilled potentials of the vice president.  The non-appearance of the vice president has raised many eyebrows about his potentials to run the country in the president’s absence.

The ruling party’s information engine seems to be waning with distinguished journalists defending the government instead of the ministers. The Al-Jazeera debacle would have torn the party apart had journalists like Dr. Sylvia Blyden, Kabbs Kanu not intervened. Some journalists have defended the ruling party more than those entrusted to do the work. With the pace of technology, the ruling party should be focusing on proactive mechanisms rather than infighting.

The country is growing in terms of youth empowerment as some youths can boast of decent jobs and decent standard of living. At  a well-attended AWOL ceremony at’ Old Skool’, the avalanche of youths demonstrating their skills in organizing a ceremony devoid of political influence speaks volumes of youths ready to lead the country forward. Sierra Leone has seen its youths matching outsiders in all spheres of life. Most of the friends are not only doing well in their various capacities of life, some are even doing more than those living in the west. The west can boast of opportunities but Sierra Leone can now boast of youths that are capable of holding their breaths and hands tall in the face of adversity. I admired this zeal in the Sierra Leonean youth and pray that God continues to help the people of the country. The notion that the West is the best no longer rings in the ears of the Sierra Leonean youths. Bravo to the youths as the West can be cruel, harsh and boring. It is not all that glitters is precious.

The airport has seen a tremendous facelift with passengers accessing their baggage without being pilfered. As I went through the final check at the airport, I think of the following:  hundreds of passengers on okada that are unable to use vehicles, the hundreds of school kids fighting for transport with other members of the society, the elections and its results as I know of people who may want to consider politics as a do or die affair and my mind aches for those who may want to destroy this beautiful country called Sierra Leone.

The escalating violence that erupted over the weekend has sent chilling reminder of the brutal past. As I turned around and glanced at the tarmac, I prayed that God showers His blessings on the hearts and minds of the people of Sierra Leone so we can go through the political process peacefully and peaceably.