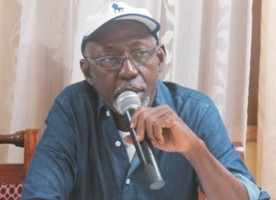 At the root of governance failure and political dysfunction of Sierra Leone today, is the persistent deviation from truth and justice.

The lack of these benchmark symbols, undermine the very credibility of those in a government which seems to have elevated indiscipline and injustice in public life.

But as tomorrow looms large on the horizon of Sierra Leone’s destiny, President Koroma’s government needs to re-establish its reputation as one truly committed to change and competence and not one with forked tongue.

If the President wants Sierra Leoneans to believe that he is indeed what he says on the tin, then my word to him is: Don’t tell us; show it.

For one, in order to fix the system, we need to fix our morals and the quality of our individual conscience.

For the dawn and the nation’s pride to be restored, the President, as the leader of the nation and the symbol of the mantra for change, has to ensure that he, and indeed all his lieutenants arm themselves with knowledge, integrity and the steely resolve to change the face of national life.

It is this that reminds me of the stench of injustice involving the erudite Sierra Leone international history Professor, Ibrahim Abdullah, who is being punished for his moral stand on the state of education in FBC.

Professor Abdullah’s plight represents the ashes of a nation’s innocence. It is vindictive, reckless and in many fundamental respects, senseless and ethically damaging. It exposes the damage to political leadership which is so poisoned by the image of corruption that its entire atmosphere fumes with vendetta against perceived enemies. (More of this later)

It shows that not only do we not reward anyone who is not of the same persuasion for a job well done; we castigate them and make them regret they ever served loyally. Little wonder that the country is desperately short of quality human resources to help tackle our endangered socio-economic and political system.

Let’s put the marshal music on. It sounds better.

I had initially harboured the thought of writing an open letter to the President, as Chancellor, on the lingering drama and display of grotesque unfairness involving the Professor, but then I realised that eminent international scholars have already done so, only to be greeted by a blatant wall of silence that indicates that the plight of the amiable gentleman is probably state sanctioned.

However, there is the probability that President Koroma may have been misadvised or deliberately kept in the dark, by those who denigrate the sort of moral nuance, passion, commitment and patriotism that people like Dr. Abdullah brings to the damaged table of our national existence where the line between right and wrong has been totally obliterated.

Therefore the continued silence of the President so far is astonishing when one realises that not redressing the issue is a confirmation of the fact that the value of uncompromising emphasis on integrity and honesty have been thrown to the winds.

Little wonder that our ivory dungeons are devoid of the best brains that prefer to be in exile simply because of the kind of the moral decay and administrative ineptitude displayed by the hopelessly demented leadership of FBC and indeed the education ministry.

With the tardy performance of the FBC administration and the tacit endorsement of the government in this stench of injustice, Sierra Leone stands to lose the few remaining patriotic scholars fighting to keep the country represented in today’s globalised world.

The steadfast refusal to check the illegality and injustice in the administration of the institution when placed side by side with the strenuous effort by the government to be seen as fighting corruption amounts to a boomerang of insincerity and a master class in political cynicism.

Worse still, shooting the critics’ fox through some too-clever-by-half political gimmick as corruption swims comfortably in the very heart of our most recognisable educational institution, and engineering the removal of known and fearless crusader of propriety, shows the futility and irrationality of revenge.

I am aware that Ibrahim Abdullah was one of those who in the utter belief and pursuit of a better Sierra Leone, put their principles on the line and went out to ensure the emergence of President Koroma in 2007. I believe it was in the mistaken conviction that it was truly change time.

Today he is paying the price for being honest enough to ensure that he is not tainted by the political charade. He left I believe at the realisation that it was the same song but different hymn-sheet colour.

Good governance thrives on a growing democratic culture that evolves through functional and envisioned leadership which is able to harness and deploy every available resource, potential and concrete, to the benefit of the people, economic growth and socio-political stability.

Education is the core of a knowledge economy and a knowledge-based democracy.

However, the state of our education is like watching the slow erosion of coastal paths: details seem unimportant until the structure crumbles.

Earlier on in our history, FBC was not just a centre of academic excellence but also a foreign exchange earner and an architectural masterpiece, whose certificate was well respected globally.

Today, this citadel of learning is a shadow of itself and the beauty of the campus has not only vanished but the intellectual components have seriously nose-dived.

It is this deplorable state of affairs that turned Professor Abdullah into a marked man.

The stench in our governance is indeed radioactive. It is an indication that the leadership cadre still doesn’t get the magnitude of our on-going calamity especially in the education sector.

When you survey the landscape of this utterly underwhelming yet vital segment and the government’s disposition to the state of affairs, you’ll realise that the future of Sierra Leone is indeed in jeopardy.

Apart from systemic issues, problems of the quality and content taught across our various tiers of education are equally telling.

The result has been that the nation has raised a generation of people who have no memory of where they were coming from, and by extension, where they should be going since they were not taught history.

Professor Abdullah, a social historian who has taught in universities in Nigeria, Canada, US, and South Africa, before giving up the good life for the development of his country endeavoured to change that sordid state by giving his students a lifelong educational development.

The way things are today, it is very difficult to believe that it is the same Sierra Leone which actually produced scholars and professionals of international renown for most of the West African countries and which earned the sobriquet ‘Athens of West Africa’.

The fight for the soul of FBC, which appears to have consumed the erudite professor, is emblematic of the situation of education in the country whereby products of our universities graduate and return home, unemployable or without jobs for years.

Yet, the government through the mediocrity of those it elevates as political patronage or otherwise, continue to display a distorted reaction to the go-slow traffic of our development and through the utterly demoralising state of our educational sector, aim a torpedo at the few individuals left with any integrity in some of the very institutions that should be insulated from, or supported better, to hold up a crumbling system.

While the rest of the developed world is light years ahead in what they teach their children, our Minister of Education and other key stakeholders are finding it difficult to agree that there is a rut and absolutely have no clue how far behind we are.

But they have the time and energy to weed out the few sane individuals in a disorganised system calling for urgent attention.

You would think this is not a problem until you understand that institutions such as the FBC, should not just be a citadel of learning but are so important to economic and social development of a nation.

They provide an infinite supply of ideas and prodigies to feed the invention value-chain of forward-looking societies and therefore value very much, the resourcefulness, dynamism and proactive sense of talented individuals such as Professor Abdullah.

Our perception of justice and fairness is distorted alright; it is no reason why the weaknesses in our democracy should be magnified for the rest of the world to see how backward we truly are.

A systemic rot of this nature does not require the form of absurdly or wholly futile or ineffectual, means of continuity. It is the challenge of how to deal with such a comprehensively dysfunctional system that allows largely hustlers hiding behind current interest and historical and political competence that warrants the intervention of the President.

Obviously, political pawns who see themselves as technocrat experts, have adapted to plugging into the corruption play. Their continued strength is reflected and magnified in the weaknesses in our educational system which has ended up stunting its growth.

Over to you, the fountain of wisdom- President Koroma. The power to correct salient festering issues bogging down the nation’s education system at the tertiary level lies with you. We cannot continue to kill the potentials that can turn the system around while sparing the looters.

Fellow reasonable and patriotic citizens, especially those who strut the corridors of power; or who have the president’s ears; or who truly want FBC back to its best, is there nothing you can do to remedy the situation?

The plight of Professor Abdullah is a fight between darkness and light. We need to resolve today that the fountain of knowledge should never be represented by second rate players. This is the starting point for the envisaged turnaround. Failure is not an option in the fight for justice and equity.

Future generations would not forgive us. Today, is Professor Abdullah. Tomorrow, it could be you or anyone close to you. We need to put a stop to injustice and impunity.

If the FBC administration is allowed to flout the law, and the government is empowered to turn a blind eye, let us remember that it is our tomorrow in jeopardy.