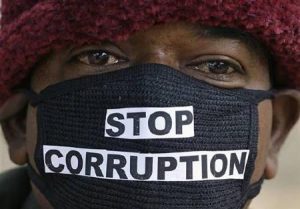 It is an open secret that Sierra Leone has recently been locked into the jaws of a spate of undesirable scandals, ranging from the NRAgate, bank fraud, and bribery of police, traffic wardens and right down to school teachers. The extent to which corruption has been unearthed in the country may leave one wondering whether the concept itself is institutionalised. As if to add insult to injury, Transparency International, the global coalition against corruption ranked Sierra Leone as the country with the highest number of respondents (84%) that admitted taking part in a bribery ritual.

Although the organisation is regarded by many as the “global corruption barometer”, its recent publication did not pass unnoticed as “patriotic citizens” of Sierra Leone queued up to rubbish its findings. Journalists, government officials, “sons and daughters of the soil” wasted no time in pouring cold water on its findings; all in defence of the realm. Some questioned its legitimacy and authenticity; labelling the report as “desktop information”, whilst others went scientific in questioning the research methods used. In the eyes of our “patriots”, the report was an adulterated fable of fallacy.

It will sound like flogging a dead horse if one continues to attempt to decipher the validity or authenticity of the report, as so much has been said already. However, the tragedy about this saga was that in spite of the near collision between the NRAgate and the TIs report, the big picture was lost in translation.  Buried under the debris of accusations, denials and defences, what the report may have aimed to portray was the average citizen’s perception about corruption; that “more than half of people believe the level of corruption in their countries has increased over the past two years, (according to the world's largest public opinion survey on the subject”). “Citizen Activism is under-appreciated for its role; as we saw in Brazil when protests against government spending were rife in June. Maybe we have been overlooking the power of the people themselves, women who are empowering each other, civil society pulling itself up.”

The object of this piece is not to pass moral or scientific judgement on the report. What amazes the writer is the decibel level of the deafening silence that has greeted the headline, “Sierra Leone in the bottom Ten:-”Global Multidimensional Poverty Index 2013.” which was published in thisissierraleone.com online newspaper (1st.Aug, 2013). Majority of the newspapers were selectively mute on the report.

Poverty is often defined by one-dimensional measures, such as income. But no one indicator alone can capture the multiple aspects that constitute poverty. The study of the world’s poorest one billion people uses a new measure, the Multidimensional Poverty Index (MPI), which was just updated in the 2013 UN report. It includes many indicators to calculate poverty – nutrition, child mortality, years of schooling and attendance, cooking fuel, water, sanitation, electricity assets and a covered floor. Poor health, disempowerment, threat from violence, inadequate living standard etc all makes up the equation.

According to the paper, the report, by Oxford University’s poverty and human development initiative identifies “star performer” nations such as Rwanda, Nepal and Bangladesh as places where deprivation could disappear within the lifetime of present generations. Close on their heels with reductions in poverty levels were Ghana, Tanzania, Cambodia and Bolivia. The aim of the multidimensional measure is to incorporate a range of indicators to capture the complexity of poverty. Like Transparency International, we should not look at these studies as a way of the colonial masters returning to cast us in a bad light, but rather use them as yardsticks “to better inform policies to relieve them”. Taking a “negritudinal” approach with these studies will not change the dynamics of what is on the ground. All the chest beating and “patriotic” prancing will do nothing to change the status quo. I am sure that there are some folks who will consider such view points as a revolutionary act and if so; guilty as charged.

So when the Multidimensional Poverty Index (MPI) report, a study undertaken by the renowned Oxford University was published, will it be plausible to conclude that the national silence that followed is a tacit admission that we are really poor?  By implication, are we subscribing to the erroneous notion that was held a decade ago; that Sierra Leone itself was “of no great importance” because the country’s only relevance to the world was the sympathy needed for its people?”  Well allow me to let you into a secret: SIERRA LEONE IS NOT POOR. If Sierra Leone is poor, then its poverty is draped with opulence. A basic geography and civics lesson is enough to teach us that as a country, we are blessedly cursed by the twin disease of corruption and mismanagement; hence the resource curse.

So where does the much vaunted “Agenda for Prosperity” come into the equation of poverty and corruption? You do the math; but if you address corruption, we are bound to see inroads into the poverty gridlock that threatens to blockade our road map to prosperity. In our recent past, we have seen institutions set up to provide the foundation for “Agenda for Prosperity”. The NRA was set up as the milking cow to provide a source of lactation for the nation (not individuals). The National Commission for Social Action was initiated in conjunction with donor bodies, to address the needs of the socially embarrassed communities. It is an arm of the government aimed at undertaking micro scale projects like road building, community /health centres, sanitation, schools, etc in needy areas at community level. If the indicators used by the MPI to measure poverty are anything to go by, it is therefore safe to conclude that NacSA is one of the bodies charged with the mandate to reduce poverty in this country.

With the much heralded “Agenda for prosperity”, you cannot help but sense that the majority of Sierra Leones do not feel as part of that agenda. It is not surprising therefore, to see newspaper headlines asking” agenda for prosperity, for whom?” This is simply because many do not feel that the “prosperity” is cascading fast or broadly enough. The feeling of disenfranchisement, of disillusion and “na bad we do?” is sometimes palpable. The President and his government are not unaware of this feeling. It was no coincidence that EBK “challenged the civil service”, the backbone of his government to take the pledge of his roadmap to the “Agenda for Prosperity”.

As for those who may have taken offence by the report from Transparency International, the global corruption barometer, please remember that “Criticism may not be agreeable, but it is necessary. It fulfils the same function as pain in the human body. It calls attention to an unhealthy state of things.” (Winston Churchill). Sometimes, people’s criticisms are heard twice as loud as their praises. For all the criticisms of the current system, it does not necessarily mean that everyone would like to return to the old one. It is much easier to be critical than to be correct; but when we judge or criticise, it says nothing about that person; it merely says something about our own need, as a nation, to be critical.

As a nation, lets us use these reports as sources of inspiration to achieve our dreams, instead of embarking on chest pumping bravado; all in the guise of misguided patriotism.  “I have a dream”…..I may not get there with you. The rest is history.