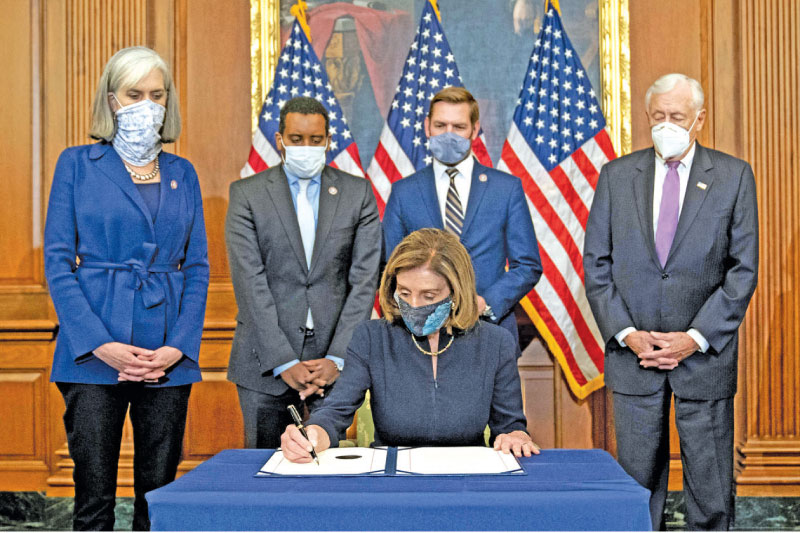 As President Trump wallows in the dishonourable distinction and honour of becoming the first American President to be impeached not once but twice, the closing speech of Adam Schiff the Chairman of the House Intelligence Committee, during the first impeachment has never been so poignant.

“He has betrayed our national security and he will do so again. He has compromised our elections and he will do so again. You will not change him. You cannot constrain him. He is who he is. Truth matters little to him. What’s right matters even less, and decency not at all. – “If you find that the house has proved his case and still vote to acquit, your name will be tied with a cord of steel, and for all of history”. Schiff’s plea to his Republican counterparts fell on deaf ears.  The Republicans made their choice; he was impeached but acquitted. They promised that trump had learned his lessons and that it will not happen again. Yeah right. A chick that will grow into a cock is spotted the very day it is hatched; and I have seen leopards change their spots.

Trump rewarded his enablers by discrediting the election results, bullied officials to overturn a widely acclaimed free, fair and secure election. When all else failed, he unleashed a group of domestic terrorists on the very institution that he was elected and sworn to defend. The refusal of Republicans to heed the warning of Schiff and many others led to what is being painted on the biggest political canvas.  Republicans were scared to “offend” the MAGA brigade. Ironically, it is the same MAGA group that would most probably hammer down the last nail to Trump’s coffin (symbolically). They had made their bed and should be ready to lie on it.; for you only reap what you sow.

Like in Chinua Achebe’s “Things Fall Apart”, the Republican party allowed an abominable group to settle among them. Trump cursed the gods of the founding fathers and ancestors of American democracy; and like a hunter's dog suddenly went mad and turned on his master. But since the “insurrection”, Americans from various walks of life have been singing the same mantra that “this is not who we are”. This is not what America wants to be, but this is exactly what you are. The spectacle of January 6th laid bare the inner entrails of American society and showed how it has been papering the cracks as it chugged along the rails of democracy.

But what is most intriguing is the response from the very people who propped, promoted and chanted “hosana” but are today saying “crucify him”. Let us look at the role of the Evangelicals, who make up a definitive chunk and base of Trump’ supporters. What is the common denominator between Trump and a religious group? Religion? NO.

Now that Trump has been impeached, again, which way forward for him now? It will be catastrophic to assume that he will just disappear into the dusk or shadows of the American scene. Trump may have been impeached and left the highest political echelon in dishonourable means. If anything, his pride and ego will be the most hurt; in the absence of any remorse.

We see that those who use to shout “hoshana” now cry “crucify him”, as his backers flee in droves. The media which gave him a platform to peddle his lies are deserting him. Social media, CEOs, financial backers and donors are tightening their purse strings now. So what were they thinking giving him all the paper space, air time, twitter threads and feeds?  But that is where lies the abject American hypocrisy. At the time that these institutions watered and fed Trump to trade his lies, did not at any point in time recognise the genie in the bottle? If Trump is going to be hurt by any of the fall outs from this debacle, it is the financial side that will hurt most.

Trump is known to exaggerate his worth. Now we know that he owes millions and possibly billions to institutions including Deutsche Bank, which has recently severed ties with him. He has a catalogue of bankruptcies to his name. While in office, he business empire ,including his remaining hotels and golf courses have been haemorrhaging financially. It is no wonder that he had tried to prop them by hosting or trying to host events at his properties. He attempted to hold a world summit at one of his properties but failed.

So how is Trump going to survive his financial meltdown; his financial “prowess” that had hitherto given him cover for his imagined wealth? Reports indicate that he raked in substantial amounts from his followers; purportedly to “stop the steal”. It has since been reported that he has instructed his team to not pay Rudy Giuliani the $ 20,000 daily retainer; as one of his staunchest disciples a single dime. Trump may not run for any public office, thanks to his impeachment. But that will not wipe him away from our small screens.

One thing is certain though, he breathes publicity and lives in a theatre., and Trump will definitely look for a surrogate to occupy his political seat. He will handpick a Republican stooge in his own image and throw his weight behind him/her in the fast-becoming political minefield. One way or another, he will make himself relevant, at least to the Republican Party. Whether that will unite the Republican party or result in a breakaway is anyone’s guess.

But Americans should stop deluding themselves that “this is not who we are”. This is exactly who you are. Let us not forget that the core of Trump’s support is the Evangelicals, supposedly a religious entity. What unites Trump and the Evangelicals has nothing to do with religion. This is the man who, in a desperate bid for a photo op in front of a church, during the riots turned the Bible upside down. When last did Trump attend a church? If anything, he has broken every sentence of the 10 commandments known to man.

So, what is the common denominator between Trump and the “religious” Evangelicals? You can find that answer in Trump’s stance on abortion, LGBT rights, immigration, white supremacy and racism, to name but a few. And if you consider that 70 million people voted for this man, as against 80 million for Biden, it becomes a delusional and PR stunt for people to say that “this is not who we are. Even on the day of the insurrection, racism in how the law enforcement police such events was vividly on show. Reports are now dripping to show that the insurrection was planned, with suggestions of military planning and the finger prints of law enforcement. And you wonder why a black man is shot first and questioned later?

It is time for America to smell the coffee, as what we are seeing today was not invented by Trump. This is the underbelly of America, upon which the nation was founded. Trump just glorified and gave these people a platform to display their long held inner instincts. Those instincts were clearly on display when 176 Republican lawmakers defied all logic to condemn Trump and voted against impeachment. America has made fighting terrorism abroad its past time. This time, terrorism is at its doorstep.

The fact that there is a strenuous attempt not to call the January 6th event a terrorist act, tells you all you need to know about the semantic gymnastics that is unfolding, as they continue to pontificate. Until Americans wake up and recognise that terrorism has come to their backyard, until this is handled in similar ways as they do with all terrorist acts, they may be in for a long haul. Just for starters, America has just undertaken the largest deployment of its forces; not in Afghanistan, Iraq, or Syria but in Washington and across its very own soil.  This may not be what you want to be, but this is exactly what you are, or at least become.