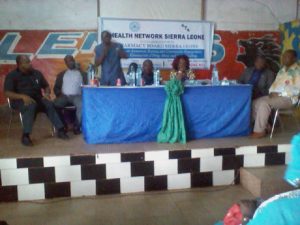 Registrar of the Sierra Leone Pharmacy Board, Mr.  Wiltshire C. N. Johnson yesterday Thursday 10th August 2017, during a one day Awareness Raising and Community Engagement on the Elimination of Drug Abuse and Drug Peddling organized by the Pharmacy Board of Sierra Leone (PBSL) in collaboration with Health Network Sierra Leone (HNSL) at the Lenry’s Complex in Wellington has disclosed that research has proven that the excessive consumptions of Tramadol by young people in the country is responsible for the major violence that are taking place in the country.

Mr. Johnson went on to say that many people in the country should now aware of the dangers of the misused of drugs. However, he added that most people are not taking it seriously.  Mr. Johnson added that the fight against drug abuse and drug peddling is a continuous process that needs the supports of government and key stakeholders. He disclosed that both government and private business people are doing their best to import good drugs into the country but many of the citizens are misusing the drugs by consuming the wrong drugs and eventually causing harm to themselves.

The Pharmacy Board Registrar therefore urged the community people to come together and put a stop to drug abuse and drug peddling and save the lives of many peaceful citizens of the country. He concluded by calling the Police, Drivers Union, Sierra Leone Teachers Union, Traditional Healers and all other stakeholders to put hands together to end Drug Abuse and Drug Peddling to save the lives of young people across the country.

Director of Health Network Sierra Leone, Mr. Robert K. Kargbo said the practice of drug peddling in Sierra Leone can be traced as far back as the colonial periods. He added that at that time health facilities were not widely spread across the country and the means of transportation and communications were limited. He went on to say that poverty and the over reliance on traditional medicines has a devastating effects on citizens. He informed that some developing countries have been able to reduce this practice of traditional medicines by embarking on massive public education for citizens to access medical facilities and treatments as prescribed by professionals’ medical attendance. He disclosed that in South Africa and Ghana, advance practice has been integrated into the health delivery service systems. However, he added that unfortunately, Sierra Leone is experiencing a huge drugs abused and drugs peddling in the cities let alone in the rural areas.

Mr. Kargbo admonished that the concern of the Ministry of Health and Sanitation, the Sierra Leone Pharmacy Board and other stakeholders is that many health facilities have been constructed across the country but little have been done to control and eradicate the abused and peddling of drugs in the country. He appealed to all stakeholders to come together and join the Pharmacy Board to put a stop to all harmful practices on drugs.

However, all stakeholders present pledged their support to stop drugs abused and drugs peddling in their various communities