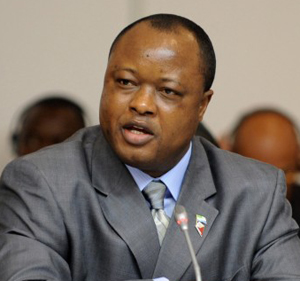 According to a United States embassy classified information released by the internet whistleblower, Wikileaks, President Ernest Koroma's popularity is likely high enough to withstand scandal but his chances in 2012 could be ruined if he fails to address his deputy's actions publicly.

"…his chances in 2012 could be scuppered if he fails to address Sam Sumana's actions directly and publicly," states the cable reportedly classified by Political/Economic Officer Amy LeMar for reasons 1.4 (b/ d) with the subject: Vice President May Be Booted For Allegedly Swindling AMCITS.

The report found Vice President Samuel Sam Sumana worth chastisement for his being named as a third party defendant in a civil suit in Perry County, Arkansas though the original suit was filed against the West family of Perry County, who borrowed money to buy equipment to be used in a logging enterprise in Sierra Leone.

"The Wests in turn named Taakor Tropical Hardwoods Holdings, Taakor Holdings of Missouri, and individuals, including Sam Sumana, in the suit. The allegations against Sam Sumana, identified as "an individual, the Vice President of Sierra Leone, Africa, and a shareholder, officer and director of Taakor Tropical Hardwoods Holdings," are as follows, quoted directly from the Third Party

Complaint: a) Accepted a Three Hundred and Fifty Thousand and No/100 United

States Dollars, in bribes from (individuals named as Third Party Defendants) and thereafter used the powers of his office to illegally arrest two Perry County, Arkansas, residents who were employees of

In the murky world of national politics, deception and political fraud, Sierra Leone's Vice President Sumana is now the epicenter of a global public debate relating to whether a senior government official with strings of criminal impropriety connected to his name should be allowed to continue to occupy his official position which he took under oath to defend and protect.

With the Wikileaks release above, it is clear that prior to Sumana's criminal implication in the Aljazeera TV Timber documentary bribery scandal and the flunking from the jurisdiction of Sierra Leone by two of his associates widely linked to previous criminal activities, Sumana's name as Sierra Leone's Vice President had already consumed pages of memos and classified US States Department records.

of the rights of elderly persons (Third Party Plaintiffs) either because of their lack of sophistication, limited education, and age, to dupe and or persuade them (Third Party Plaintiff) to rely upon his representations and thus borrow monies from Plaintiff and now stand in jeopardy of losing property set aside for retirement together with other assets sued upon by Plaintiff which assets are essential to their health and welfare and the security of their retirement and all contrary to the express provisions of the Arkansas Deceptive Trade Practices Act (id.).

Going down the lane of the origin of said allegations, the US cable stated that the political section of the embassy received a copy of the Third Party Complaint from a contact within the SLPP party, and does not have a copy of the original complaint, which likely states the dollar figure attached to the suit.

"The Third Party Complaint, however, states that "Third Party Plaintiffs are entitled to damages that include any judgment against them for all or any part of the sums Plaintiff has sued upon, the actual damages they have suffered because of the fraud of Third Party Defendants, punitive damages and attorneys fees as provided by the Arkansas Deceptive Trade Practices Act, (id.), and the amount Third

Party Plaintiff paid for the Taakor Tropical Hardwoods Holding, LTD, stock together with six percent interest from the date of purchase, plus the costs of this action and all his reasonable attorneys fees."

Post estimates that the Plaintiff and Third Party Plaintiffs are expecting remuneration of at least $5 million."

As at the time the report was filed, the released cable stated that information about the law suit has not hit the presses, though a contact in the British High Commission stated that he had originally received the news from Umaru Fofanah, the BBC stringer and president of the Sierra Leone Association of Journalists (SLAJ).

"Allegedly, the New Vision newspaper had information about the suit last week, but were paid by Sam Sumana to drop the story. Rumors then circulated about Sam Sumana being summoned to an American court and that he had been caught on tape accepting a bribe from Taakor. Sam Sumana's concern that the rumors would be printed led him to call Fofanah and demand that he use his authority within SLAJ to force all media outlets to refrain from publishing information about him. Fofanah refused, but the stories were never run – Sam Sumana likely bribed numerous journalists to keep things quiet."

The SLPP, on the other hand, it says, is holding their knowledge of the case back, and will likely use it during the election period to discredit Koroma and his judgment. "The SLPP, despite their immature antics, is capable of planning ahead: they have yet to make public the information they have that Koroma interfered with the course of justice to squash evidence of Kemoh Sesay's complicity in the July 2008 cocaine bust. These two incidents could be the one-two punch that proves that Koroma has not been true to his 2007 campaign promise of zero tolerance on corruption. That said, Koroma could use Sam Sumana's alleged indiscretions as an opportunity to prove his commitment to good governance by stating publicly why the Vice President was asked to resign. Sierra Leonean politics, however, operate on a system of subterfuge, ineptly-buried scandals, and long memories: Koroma is more likely to act now and justify his actions later, rather than be open with his constituents from the start."

On Sumana's fate at the helms of power, the report stated that a high-level contact within the State House disclosed that President Koroma intends to use his constitutional authority to replace Sam Sumana before the suit becomes common knowledge "…this could happen within the next two weeks. There are no obvious successors within the government, but a well-placed political contact suggested that Koroma may be trying to woo Dr. Morie Manyeh, a university lecturer and SLPP supporter from Kono. Post has little information about Manyeh, but knows that he is popular in Kono, which is a voting bloc that Koroma believes to be important. Manyeh is apparently playing hard to get, but it would be a feather in Koroma's cap to have a former SLPP member as his right hand, and Manyeh is thus being heavily courted."

It added that numerous sources believe that Koroma recognized Sumana as a liability even before the April APC conference, and had started the hunt for his replacement then. "Even if Koroma decides to keep Sam Sumana on-board now, the likelihood that he will be his 2012 running mate is slim to none."