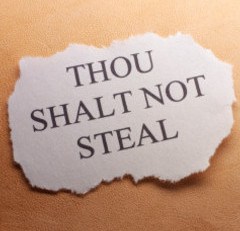 The ten Commandments which is also known as the “Statutes, Ordinances and Decrees” of Christianity is found in books of Exodus, chapter 20, and Deuteronomy chapter 5, and, according to the Old Testament, they have been given to Moses on Mount Sinai by God the almighty King, as a divine decree for the Israelites after he had delivered them from Egypt where they were enslaved.  Those commandments have become the most powerful statutes of modern Christianity which all believers in the Holy Bible should uphold especially when one takes upon her/himself to serve as an evangelist who preaches the words of God.

But contrarily to expectation, this doesn’t seem to be the case for Rev.  Father Andrew Benya of the St. Michaels Catholic Church in Tongo Field, as he has proved to be a nonbeliever of paragraph 8th of the 10 Commandments which says: “thou shall not steal”.

Residents in Tongo Field, Lower Bambara Chiefdom, Kenema District are curiously asking  when did the Catholic Mission in the country started training thieves after they learnt that one of the honored priests, Rev. Father Andrew Benya, has shamelessly stolen money meant for funeral rite of one of their committed member who passed away few weeks ago.

According to findings, Rev. Father Andrew Benya pocketed the sum of Le100, 000 from a total of Le 200, 000 which was given to him by the choristers of the Holy Trinity Parish of Kenema, as contribution for the funeral rite of one Mr. Peter Vincent Lansana, a former committed member of the St. Michaels Catholic Church in Tongo, who passed away few weeks ago.  The money is said to have been donated by church members, sympathizers, friends and well-wishers in Kenema.

In an interview with one Mr. Kebbie, a member of the chorister group in Kenema, he confirmed delivery of the sum of Le200, 000 to Rev. Benya in Tongo for onward delivery to the Lansana family (the bereaved) and he had done so based on the fact that the man of God was the eldest and spiritual figure of the Mission in Tongo.

According to Ibrahim Lansana, one of the sons of the deceased, the family only learnt about the unspiritual and unsympathetic behavior of the man of God on the 19th   last month after they were informed by one of the choristers of the Holy Trinity in Kenema that the actual amount of money they had sent for the funeral was Le 200,000.

Ibrahim, who disclosed to this medium that his father had left several children with a very poor mother, is calling on the Catholic Mission in the Eastern Region to help retrieve the said amount from Rev. Benya sighting that since his father past away the family has been facing the harsh reality of life in the country.

When contacted by this reporter, Rev. Benya confirmed receipt of the said amount (Le 200,000) but had kept half of it as part of his usual mass stipend even though that wasn’t stated by Mr. Kebbie who delivered the money to him.

Since Rev. Benya’s unholy act became public, he has been dodging the Lansana family and other important spiritual gatherings in Tongo.