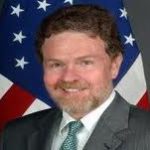 United States Ambassador, Michael Owen, yesterday toured Connaught hospital, the main referral in the country to assess the health sector with special emphasis on the work of New York-based NGO, Surgeons Over Seas (SOS) that have been working here since 2008. During the tour, the Ambassador was taken to different departments including the Trauma Accident and Emergency ward, Hematology, CT Scanning Room, Histopathology Department and the Outpatients wards.

Some of the problems highlighted during the tour were that certain some of the instruments that the hospital should use are not in working conditions, for example, the embedding and Circura machines that should be used for processing human tissue.
This was discovered not presently in use because the chemical to be used have not been supplied by the government; therefore they are not using the machines.

The US Ambassador in his statement said that the partnership between Sierra Leonean surgeons and SOS is to improve the standard of medical care in the country, adding that “a good public health system is one of the cornerstones of development.”
Ambassador Owen said that “it is extremely encouraging to see the good work that these medical professionals are performing on a daily basis, often under very difficult conditions.”

He said what he is astonished the most is seeing medical instruments that are over 100 years and are still in working order, “really it amazed me but these are mostly good instruments are can hardly need repairs.” The Ambassador stressed that he has been waiting to pay this visit to the Connaught Hospital, but “his visit today shows a sign that they want to strengthen and maintain the partnership so that things can be much better than before”.

US Surgeon Peter Kingham said that their philosophy is that the local surgeons are the experts since they know their people and mostly their medical history, and that it is the local surgeons themselves that do the job. The Director said that before they started work here, they did an initial assessment and it was discovered that there were lack of equipment and supplies and also lack of training in education which were reasons for them to commence work here.

He explained that they have instituted lots of programmes to ensure changes in the medical system as they have been able to send 2 containers of medical and surgical supplies and equipment that were sent directly to the Ministry of Health and supplied it to the Connaught Hospital, adding that they support training programmes and that local surgeons have been assisted to conduct emergency surgery workshops.

Dr. Kingham disclosed that when the partnership started, they also found out that the poor salary scale that the surgical staff receive, so they assisted with boosting the salaries of the staff including nurses, wardens and the staff working at the theaters. “This we did until the Ministry of Health increased the salaries of these staffs.” Questioned about SOS future plans, the Director said that they intend to bring a team of US Specialists to train surgeons and to work with the Sierra Leonean specialists as an exchange programme and both sides will gain knowledge.

Dr. Thaim Buya-Kamara said the partnership is great and it has brought great improvement in the health sector in the country. He added that surgical cases have improved over the years from less than 500 in 2008 and 2009 to over a thousand, “this is partly due to the collaboration with SOS.”