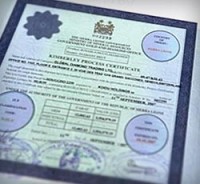 The United States Department of State, Bureau of Economic and Business Affairs, and the U.S. Customs and Border Protection have issued a warning about fake diamond Kimberly certificates from Sierra Leone issued in April and May 2014.
According to the release “in one elaborate scheme, individuals were invited to Sierra Leone to view rough diamonds that were later evaluated as fake stones and were also provided with a fake Kimberley Process certificate numbered Sierra Leone 004199, issued in either April or May 2014.”
The release further revealed that “Variations of certificate SL 004199 has been presented to prospective diamond purchasers in the past three weeks.”
The U.S. Customs and Border Protection says over the past year “it has identified false Kimberley Process Certificates from Guinea, Ghana, and Sierra Leone that have been used by criminals in an advance-fee scheme to defraud people of thousands of dollars.”
The release further explained that “The criminals have approached U.S. citizens via the internet urging them to purchase rough diamonds directly from West African sources promising legitimate Kimberley Process Certificates for export.”
The Legitimate Kimberley Process Certificates are used to control the international trade in rough diamonds.