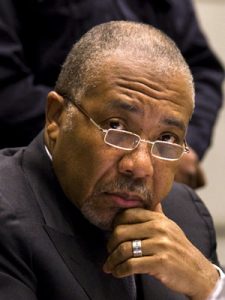 Sierra Leone: Charles Taylor appeals judgment is an historic step in the fight against impunity and signals imminent successful completion of SCSL mandate

Today, in The Hague (Netherlands), the Appeals Chamber of the Special Court for Sierra Leone (SCSL) handed down its decision in the trial of former Liberian President Charles Taylor, upholding the judgment and sentence delivered by the Trial Chamber of the SCSL last year. On 26 April 2012, Charles Taylor was found guilty of having planned, aided and abetted war crimes, crimes against humanity and other serious violations of international law for his role in supporting Sierra Leonean rebel groups during the armed conflict. A month later, on 30 May 2013, the judges handed down a sentence of 50 years in prison against him.

Unlike the Appeals Chamber of the International Criminal Tribunal for the former Yugoslavia (ICTY), in its controversial decision to acquit Momčilo Perišić Chamber under some new and unlikely theory of liability that flies in the face of well established jurisprudence, the SCSL ruled that there was no "specific direction" requirement for a person to be convicted of aiding and abetting crimes.

President Taylor is the last defendant to appear before the Court, which has issued sentences against eight individuals for their actions during the conflict in Sierra Leone.

Statement by Alison Smith, Legal Counsel and Director of the International Criminal Justice Program of No Peace Without Justice:

“No Peace Without Justice (NPWJ) and the Nonviolent Radical Party, Transnational and Transparty (NRPTT) applaud the final judgement in the trial of Charles Taylor handed down today by the Appeals Chamber of the Special Court for Sierra Leone (SCSL), which sends a deterrent and unequivocal message to leaders considering committing serious crimes in violation of international law: nobody is above the law and even those at the highest level will be held to account for their actions.

“Today’s decision, that we have all been waiting for since its indictment in 2003, marks an historic step in Sierra Leone’s long road towards achieving accountability for the horrors of the armed conflict as well as, crucially, providing justice and redress to the victims and populations affected by it. It also signals a major achievement for international criminal justice world-wide, being Charles Taylor the first former head of State whose case has been heard through to the appeals stage by an international tribunal since the Second World War and the Nuremburg trials.

“By reflecting the utmost gravity of Charles Taylor’s crimes, the judgment and sentence handed down by the SCSL last year and upheld today, clearly mirrored the findings of the SCSL with regard to use of terror as prior modus operandi in the campaign undertaken by the Revolutionary United Front (RUF), which was directed and supported by Charles Taylor before, during and after his Presidency. Instrumental to the Special Court’s findings of prima facie humanitarian law violations in the case of the RUF were the UN Human Rights Reports and the No Peace Without Justice (NPWJ) Report based on its conflict mapping program conducted in Sierra Leone in 2000-2004, which were deemed “reliable and useful” for understanding “the background to or context of the conflict, as well as to make general findings".

“The issuing of the Charles Taylor final judgment also brings the mandate of the SCSL near to completion. It is now essential that all remaining necessary efforts and measures are carried out to ensure that the SCSL leaves a meaningful and consolidated legacy for justice, reconciliation and the rule of law, for the Government and people of Sierra Leone and Liberia, as well as for future international criminal justice initiatives in Africa and worldwide. The Residual Special Court for Sierra Leone, which will take over from the SCSL, is an important tool in ensuring the sustainability of the SCSL’s legacy and ensuring that the SCSL’s ongoing obligations, such as witness protection and management of the archives, are properly fulfilled. It is therefore critical for States and other members of the international community to support the Residual Special Court, both politically and financially”.