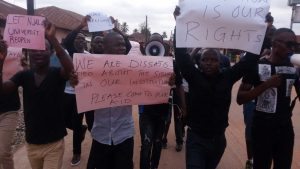 To describe the spate of violence that gripped our country and especially the Southern region on Thursday as despicable would be an understatement. Violence of any kind cannot be condoned at any cost. What unfolded on Thursday was a culmination of frustration, abuse of power and the fight for right to education. It has been an ongoing situation. Reports indicate that “after losing so much due to the Ebola outbreak, students of Njala University are yet to start their academic year (Umaru Fofana-Facebook). This is reportedly because; the lecturers are on strike for unpaid allowances dating back many years. If that is the case, how do these politicians think that these lecturers would survive, let alone live a decent life? Can you imagine our ministers going for just one month without their salaries? Hell will freeze without doubt. But they will happily watch poor students and lecturers suffer to the hilt without any action taken to alleviate the situation.

The Registrar of Njala University Aly Turay issued a press release “appealing to the entire membership of the Njala University Academic Staff association (ASA) to call off the strike action to ensure that the University re-opens with immediate effect. To start with, that was not an appeal, but an order. You don’t shake hands with a clenched fist. Following this threat of an “appeal”, the Secretary to the Vice president S.M. Kapuwa, also issued an invitation to the “Njala University Administration, the Academic Staff Association and the Student Union Executive to a meeting in his office at Tower Hill on Monday 27th march, 2017 at 2.p.m.” All these invitations and “appeals” appear to have been issued after the avoidable loss of young lives; thanks to our trigger happy security services. 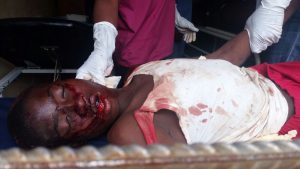 A dead student, gone and forever

There are a lot of questions that need to be answered here. For starters, we all know that students at the university had not attended classes because of the strike action of their lecturers. The question is, how long has the ministry of education and the government in particular, known about this? What have the Ministry and the government done about this all along? Did we have to lose young lives to generate an “appeal” and an invitation from the Registrar and the VP respectively? Did our students need to take to the streets before someone would listen to their pleas? No one is condoning the kind of violence that traditionally mars this kind of well-meaning protests. We know that Violence, even well intentioned, can always rebound upon oneself. The duty of youth is to challenge corruption. But lawlessness is lawlessness; and frustration should not be used as an excuse for lawlessness or anarchy.  Students should be able to “Say what they want but should NEVER say it with violence!”

However, why did the government sit on its hands all this while, knowing fully well that the students were being deprived of their lawful right to education? And by protesting for their rights; was it too much to ask? But the question that is becoming so unpalatable to the political and social taste buds of many is the trigger happy nature of our security apparatus in the country. In the first place, why were our security forces issued with live rounds of ammunition to quell or disperse the crowds of protesters? For all we know, these were unarmed youths asking for their rightful rights. There may have been others bent on hijacking the situation for their long held gripe against the system. But the bottom line is that, these students were not armed for mortal combat with the security forces. 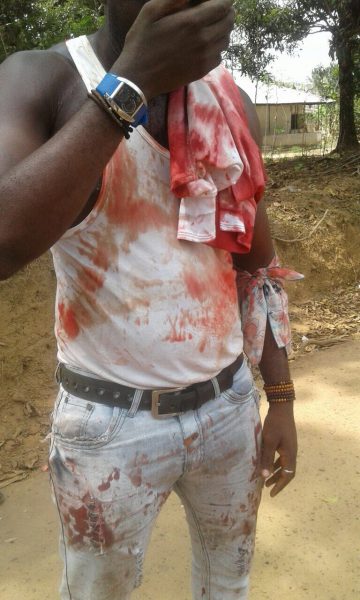 A student drenched with blood of a dead colleague

So why do our security forces believe that using live ammunition was the answer? The fact that they were issued live rounds could be seen by many as intent to kill. If there was no intent to kill, why issue live rounds? You can’t convince anyone that issuing live rounds to these guys was for a paintballing exercise. The bullets themselves incite deeds of violence.  I do believe that the Inspector General of Police, Mr. Munu has a few questions to answer. Or is this another show of one law for some, another for others? Are some people above the law, or has the diction “a force for good” become a contradiction in terms? Has violence become the last refuge of the incompetent? Our security forces appear to show no reverence for human life. Our security forces have the sacred job to protect life and property. But violence is not how moral authority is claimed, that’s how it is surrendered.

The right to peaceful protest and the right to assemble are some of the cornerstones of our constitution. They form part of the very fabric of our democracy. Our leaders should realise that those who make peaceful revolution or protests impossible will make violent revolution inevitable. Violence multiplies violence, and the fact that our security forces are prone to apply this to unarmed students could be seen by many as “institutionalised violence” in itself.  As a nation, we should treat violence as an aberration. But if recent events in our country are anything to go by, it is fast becoming the norm. As long as people use violence to combat violence, we will always have violence. So where does our democracy sit with the right to peaceful protests or the right to assemble? 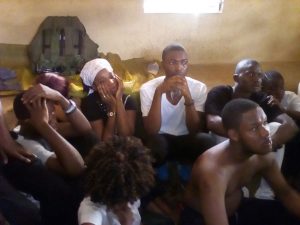 Agonising faces of students who have just lost their colleague

Just a week ago, our country was the envy of many economies, as our President proudly paraded one of the largest gems to be found in the country. The sad irony is that, even with such an abundance of wealth, we cannot even afford to pay our lecturers to teach our children of the future. Our country has become the proverbial man who sits by the banks of the river but still washes his hands with spittle. Instead of a blessing, these gems have become a curse to our nation; thanks to greed, mismanagement and the privilege of being ruled by people with the conscience of a chainsaw.

As we all know by now, the government embarked on a highly vaunted drive to get citizens to register for the upcoming general elections next year last week. There is no doubt that since the end of the rebel war, youth participation in the political life of our nation has never been higher. It is expected that among all the spheres of the age spectrum, the youth are expected to be the most registered. Registration to vote and the right to vote is seen as a civic duty that is sacred, and should be held as sacrosanct to the dictates of any democracy. So how does the government reconcile the right to vote with the right to peaceful protest or assembly? These are all parts of the fabrics of any democracy. So when the government promotes the right to register and vote on the one hand but takes a dim view of the right to protest; is the government cherry picking the juicy aspects of democracy for self-preservation and self-aggrandizement? It is no wonder that during the protests, the student s were chanting “No lectures, No Registration”. You can’t eat your cake and have it back, comes to mind. 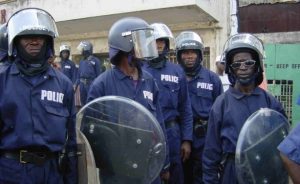 Sierra Police: a force for good or force to kill?

We should not allow political power to grow out of the barrel of a gun. We have been told that the IG of police had warned his security personnel against using live bullets. If that is the case, then those who apparently defied his order should be brought to book. They need to explain why they defied the IG’s instruction. But if these security personnel were issued with live bullets to quell the “riots”, then the IG needs to justify this to the nation. No one should be allowed to take the law into their hands. We cannot have a society that presumes a norm of violence and celebrates aggression. Of all tasks of governments the most basic is to protect its citizens against violence.

In trying to resolve this issue, the hope is that the VP and the government will remember during their meeting on the 27th this month that,  “Democracy is about the dialogue; protest is about initiating the dialogue and freedom of speech is about respecting each other’s dialogue.” Never in history has violence been initiated by the oppressed. How could they be the initiators, if they themselves are the result of violence?”