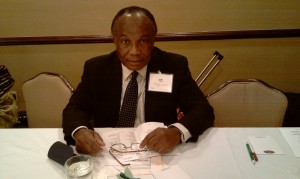 Sierra Leone is a perfect example of how the African politician should do away with the absurd juju-marabou spiritualism – if Africa is to progress with clear-headedness. For over ten years, a mixture of archaic one-party regimes, profound juju-marabou dabbling by political big-wigs and close thinking resulted in the self-immolation of Sierra Leone. The rebel group, the Revolutionary United Front (RUF), was born out of this political rot. The RUF itself got entrapped in the ancient juju-marabou practices. Expectedly, it derailed RUF’s aimed democratic revolution and made RUF frozen in the dark practices of this aspect of the African culture.

In their confusion in stuck in juju practices, the RUF amputated Sierra Leoneans limbs, turned girls into prostitutes, looted diamonds, fire-bombed properties, practiced cannibalism, and frequently carved the initials "RUF" on their child soldiers' chest. RUF officers rubbed cocaine into the open cuts on their troops to make them maniacal and fearless, and for entertainment, some RUF soldiers bet on the sex of an unborn baby and then sliced open a pregnant woman's womb to determine the winner.

The dawn of the real African democracy and Africa’s on-going enlightenment movement has somehow brought some light into the Sierra Leonean/African political field. Growth of democratic tenets is refining, as the Sierra Leonean would say, “na god mak am” mentality that is driven by fatalism that is mostly driven by the juju-marabou spiritual beliefs. With its leaders ensnared in this culture, Sierra Leone became darkened against the enlightened fact that the country had once been the Athens of West Africa – a hub of illumination.

But as the decomposition that led the RUF and other forces to destroy Sierra Leone revealed, the supposedly enlightened Sierra Leone was superficial, it leaders acutely ignorant of the irrationalities within their culture wheeling within them and making the hub of West African education at the mercy of irrational forces.

But events would be better as the African enlightenment movement rolls on. In Sierra Leone`s political big-wig, Dr. John Ernest Leigh, the proverbial African politician is getting the hard message that the ancient juju-marabou spiritualism has made the African politician unrealistic, weak-minded and self-destructive. And Leigh is setting an African example by attempting to extricate himself from this antique absurdity. From the best of my African affairs knowledge, it is the first time a prominent African politician has resigned from his political party for voodoo, juju-marabou reasons. That’s a good omen for Africa.

On December 15, 2011, Leigh resigned from the main opposition, the Sierra Leone Peoples Party (SLPP), part of the reason being what he explained as the recurring “voodoo politics” that is stuck in African primordial witchcraft beliefs and juju-marabou mediums. In this African political spiritual universe, primitive juju-marabou mediums simultaneously control and manipulate the African politicians’ thinking to the detriment of the African reality and modern, rational choices.

Before his resignation from the SLPP, Leigh was one of the top resilient folks in the SLPP. Leigh had been Sierra Leone’s Ambassador to the United States under the SLPP regime of President Ahmed Tejan Kabba. I came to know Leigh when he participated in a peace conference on Sierra Leone organized by the Ottawa, Canada-based International Development and Research Centre in June 21-23, 2000. Leigh appears urban, a clear thinker and sophisticated. He spoke eloquently and forcefully for his country’s peace-building and democratic prospects. Leigh exuded profundity and light in the conference room, keeping the audience spellbound

(Among the selected audience were the ace Sierra Leonean academic and journalist, Dr. Lansana Gberie, currently a Senior Researcher with the Africa Conflict Prevention Programme of the Institute for Security Studies (ISS) in Addis Ababa, Ethiopia; the Ghanaian-Canadian political scientist at Canada’s Carleton University, Dr. Daniel Tetteh Osabu-Kle; and the Nigerian-born journalist and publisher of the Freetown-based Concord Times, Kingsley Lington Ighobor, currently with the United Nations magazine Africa Renewal).

Leigh’s new-found bold insight into African leadership predicament, coming from within the developing spaces and values of the Sierra Leonean and African democracies and enlightenment movement, is what Standard Bank’s Simon Freemantle, arguing in the London, UK-based African Arguments, says is “Africa's political plates are shifting … and the concomitant rise in a more connected, and increasingly more empowered populace …”

A Pan-Africanist, Leigh is empowered by the on-going African enlightenment movement that seeks to refine the inhibitions within the African culture that have been making the African live uncomfortable life. And also appropriate the enabling aspects of the African culture for real policy development. Damning what he called benighted “voodoo politics”  and “ widespread acceptance in secret and off-camera of voodoo juju-swear ceremonies as part and parcel of the party’s unofficial ’democratic’ process in selecting its leadership,” Leigh’s action throws more light into the dark recesses of the perverse African leadership, where illiterate juju-marabou mediums easily manipulate apparently educated African leaders like puppets and make them dance to their unfounded whims and caprices to the damage of Africa’s realities and progress.

But things surely have to change for the better. From the on-going African enlightenment movement to the transformative networks of social media, the inhibiting African cultural practices of are being exposed for refinement. More than ever, African leaders’ thinking is being scrutinized as to why they have been messing up Africa despite Africa’s immense wealth and human resources. Part of the reason is their heavy dabbling in the ridiculous juju-marabou spiritualism that has debilitated their reasoning.

Uganda`s Idi Amin, Liberia`s Samuel Doe, Equatorial Guinea`s Marcia Francois Nguema, and the Central African Republic`s Jean-Bedel Bokassa come to mind. They were so stalled in the absurd juju-marabou practices that not only did they darkened their countries but also shattered them. Their cases reflect how primitive African juju-marabou spiritualism dims African leaders’ thoughts and begrime their countries. Idi Amin was told by his senseless juju-marabou spiritualists to deport all Asians in Uganda. Amin believed in their advice, and the result was the ruin of Uganda, putting Ugandans in long-running despair.

By resigning from the SLPP for reasons that have been deeply disturbing Africa’s greater progress – voodoo-juju-marabou politics spoiling the rational foundations of African leadership, Leigh demonstrates the fact that Africa’s on-going democracy is actually working and being used to streamline Africa’s development process.