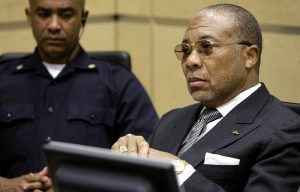 Charles Taylor in the Hague

On 16 May, convicted war criminal, Charles Taylor, delivered a 30-minute speech – part plea for clemency, part lubricious defence of his actions, and part grandstanding – before his trial judges at The Hague as he awaits sentencing on 30 May. Because the address has been seized upon by crypto pro-Revolutionary United Front’s (RUF)activists and supporters to discredit the carefully-deliberated ruling against Taylor, it is important to respond to the key claims made therein. I will be quoting in this article from the summary judgment: the final judgment will be far more detailed, and for that reason far more devastating.

So I’ll begin by reminding readers of the main legal finding against Taylor. The Trial Chamber in its judgment on 26 April found Taylor “beyond reasonable doubt” to be“criminally responsible” for aidingand abetting the commission of war crimes and crimes against humanity. The judges wrote that they were satisfied that “as of August 1997” Taylor“knew of the atrocities being committed against civilians in Sierra Leone by theRUF/AFRC forces and of their propensity to commit crimes.”  Notwithstanding this knowledge, Taylor“continued to provide support to the RUF and RUF/AFRC forcesduring the period that crimes were being committed in Sierra Leone. The Trial Chambertherefore finds beyond reasonable doubt that [Taylor] knew that his support to theRUF/AFRC would provide practical assistance, encouragement or moral support to themin the commission of crimes during the course of their military operations in SierraLeone.”

The judges found that “in addition to planning and advising” the RUF and rogue soldiers of the so-called Armed Forces Ruling Council (AFRC) “on the Kono-Freetown operation” including with respect to the gruesome invasion of Freetown in January 1999, Taylor  “provided military and other support” to make the attacks and subsequent atrocities possible. Taylor “facilitated the purchase and transport of a large shipment of arms and ammunition from Burkina Faso in around November 1998 which was used in the attacks on Kono and Kenema in December 1998, where further arms and ammunition were captured. These arms and ammunition were in turn sent to the troops in Freetown in January 1999 and also used by the RUF and AFRC in joint attacks on the outskirts of Freetown.” In addition to this crucial support, Taylor “also sent personnel in the form of at least four former Sierra Leone Army (SLA) fighters who participated in the attack on Kono, as well as 20 former NPFL fighters who were part of the forces under the command of Gullit that entered Freetown, and a group of 150 fighters with Abu Keita (a former ULIMO member), known as the Scorpion Unit, who participated in the attack on Kenema.”During the mass atrocities Freetown in January 1999, Taylor’s “subordinates in Liberia also transmitted ‘448 messages’ to RUF forces to warn them of impending ECOMOG jetattacks. These messages originated in both Sierra Leone and Liberia.” Taylor, the judges wrote, “held a position of authority amongst the RUF and RUF/AFRC.”

There are other devastating findings by the judges, but these alone from any reasonable point justify the severest of punishments. Those who affect to contrive a hierarchy of guilt wherein ‘aiding and abetting’ is somewhat venial should note that the attacks on Freetown in January 1999 alone led to the murder of about 6,000 people, the crude amputation of hundreds of people (including babies), and the burning down of a large part of the city by the rebels. The verdict in this case concludes that Taylor made that attack happen.

Now to Taylor’s vapid last speech before the judges on 16 May. He said. “What I did to bring peace to Sierra Leone was done with honour,” noting that his involvement in Sierra Leone’s war was aimed at bringing peace. This outrageous claim fails even the irony test: at least the hangman in the old morality tale wasn’t speaking to save himself when he told Don Carlos: “I shall assassinate you but for your own good!”

Taylor was apparently referring to the events of May 2000, when the RUF abducted hundreds of freshly-arrived Zambian UN troops in northern Sierra Leone and ferried them into Liberia, from where – now posing as a statesman after no doubt helping to orchestrate the kidnapping – Taylor had the Zambians released and flown back to Sierra Leone. Against that public drama let us place the court’s findings around the barbarous attacks against defenceless civilians. “In November/December 1998,” the court found, Taylor met with the psychotic RUF commander Sam Bacokarie. The two men “jointly designed” – here the judges used the heavily-loaded phrase – the “two-pronged attack on Kono,Kenema and Freetown.” That was the beginning of the road to the January 1999 atrocities in Freetown. Taylor “emphasised to Bockarie the need to first attack Kono District and told Bockarie to make the operation “fearful” in order to pressure the Government of Sierra Leone into negotiations on the release of FodaySankoh from prison, as well as to use “all means” to get to Freetown. Subsequently, Bockarie named the operation ‘Operation No Living Thing’, implying that anything that stood in their way should be eliminated.”

This is what the judges found. If this is Taylor’s idea of peacemaking, then he really should be removed from the rest of humanity for the rest of his baneful life.

On the atrocities themselves, Taylor was rather dismissive to the judges. Atrocities necessarily happen in war, he said, and then he added an idiosyncratic take on the concept of ‘just war’. He invoked the Roman statesman and orator Cicero, noting that Cicero lost the just war “card.” But Cicero, like all writers in the classical world, never worried much about the problem – just as he never worried about the massive institution of slavery of which he gleefully partook – and his understanding of the concept fundamentally differs from ours. For Cicero, the nature of the enemy – if ‘barbarian’ or ‘civilised’ – determined the conduct of war against that enemy. ‘Barbarians’ may be wiped out and their towns and cities razed (as the Roman legions did against rebellious tribes in Gaul and against Carthage), but the Romans should weigh carefully the extent of destruction to be wrought on their ‘civilised’ neighbours, like the ancient Greeks. Over the past few centuries, a just war tradition has developed into natural law which, for example, protects non-combatants, especially women and children. Can Taylor claim ignorance of this development? Let the judges ponder such a claim. Clearly, Issasesay – not to mention AllieuKondewa and MoininaFofana, the completely illiterate and honourable leaders of the Civil Defence Forces – were not given the benefit of the doubt.

I have reserved the most potent – but also most ridiculous – claim of Taylor for the last response: it is his argument that his prosecution and the verdict against him are the result of an American conspiracy to dispose of an awkward African leader. In the very active mouth of his swashbuckling lawyer, Courtenay Griffiths, the claim merited listening to. But from Taylor? This is a man who was a paid agent of the CIA for many years – and the CIA is a core institution of American imperial power. Here again – as in his claim that he was pursuing peace in Sierra Leone while arming the RUF – Taylor would want to have it both ways. You cannot claim to be revolted by American imperialism while being an enabler for it.

The judges, in other words, merely confirmed what has been well known by people in West Africa.

But from this claim, Taylor made by inference the more seductive point: surely both George W. Bush and Tony Blair were also guilty of similar crimes in Iraq for which he has been convicted yet no court has preferred charges against them. Why, he asked, is international humanitarian justice focused only on African leaders that have fallen out of favour with major Western leaders? It is a good and troubling point, to which my friend Abdul Tejan-Cole, the distinguished Sierra Leonean human rights lawyer, has offered a good response in another context. While it is curiously true that mostly African leaders face international justice,Tejan-Cole has argued, it is also decisively true that all those African leaders very much deserve to face that justice. One has to choose one’s side carefully in this emotionally charged debate, and my side is with the many African victims of the depredations of ghastly African leaders who have so far been indicted for such heinous crimes. Indeed, there should be more of such indictments and trials.

PS: In my last article on the verdict on Taylor, I noted that his trial reportedly cost $250 million. Peter Andersen, the spokesman for the Special Court for Sierra Leone, wrote me immediately after reading it that that figure represented the entire cost of the court, including all the other trials. I made a quick check of the figures from the court and elsewhere. The Taylor trial cost far less than $250 million, but the entire operation of the court cost far more than that figure.