YAD`s Youth Unification Match ended with the Youth Award Ceremony on Tuesday 20th December 22. The colourful event started on Monday, 19th December, with hundreds of youths storming the streets of Kenema in a procession of match pass with brass bands, dressed in t-shirts and wristbands, carrying banners and placards with campaign messages against violence, harmful drugs, tribal and social discriminations. 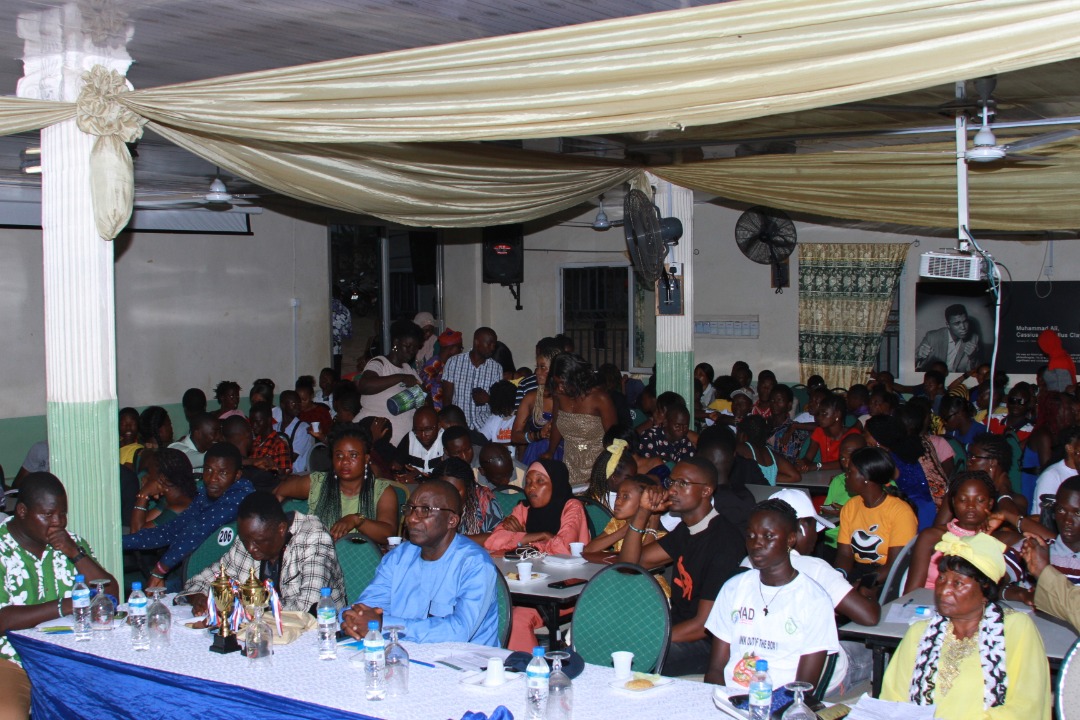 In her opening remarks, Mrs Isata Ngombulango, the Administrative/Finance Manager who chaired the program, welcomed the guests and thanked them for coming. She briefly informed her audience about the importance of the occasion, emphasizing peace and unity among the youth as the foundation of socioeconomic growth of every nation. She revealed that YAD launched the Youth Unification Match in 2013 as a component of the UNAOC`s Youth Solidarity Fund project. Since then, the event has become an excellent platform for sensitization campaigns against domestic and political violence, social discriminations, religious and tribal tolerance among the youths in the eastern region. The event is organized annually on the 19th and 20th of December.

Ngombulango further revealed that regardless of the prevailing adverse socioeconomic effects of Covid-19 and the Russian/Ukraine war, “we are still implementing projects that support our fellow youths and women in this region to become self-reliant and economically independent.”

“Through the support of our partners abroad”, she went further, “our scorecard for the year 2022 is more attractive than ever before.  We were able to implement projects in all our thematic areas, ranging from vocational education for underprivileged youths, community hygiene and sensation for rural dwellers; agriculture and food security for subsistence farmers; conflict management and dispute resolution among the youths; social entrepreneurship and sport/social mobilization programmes”. 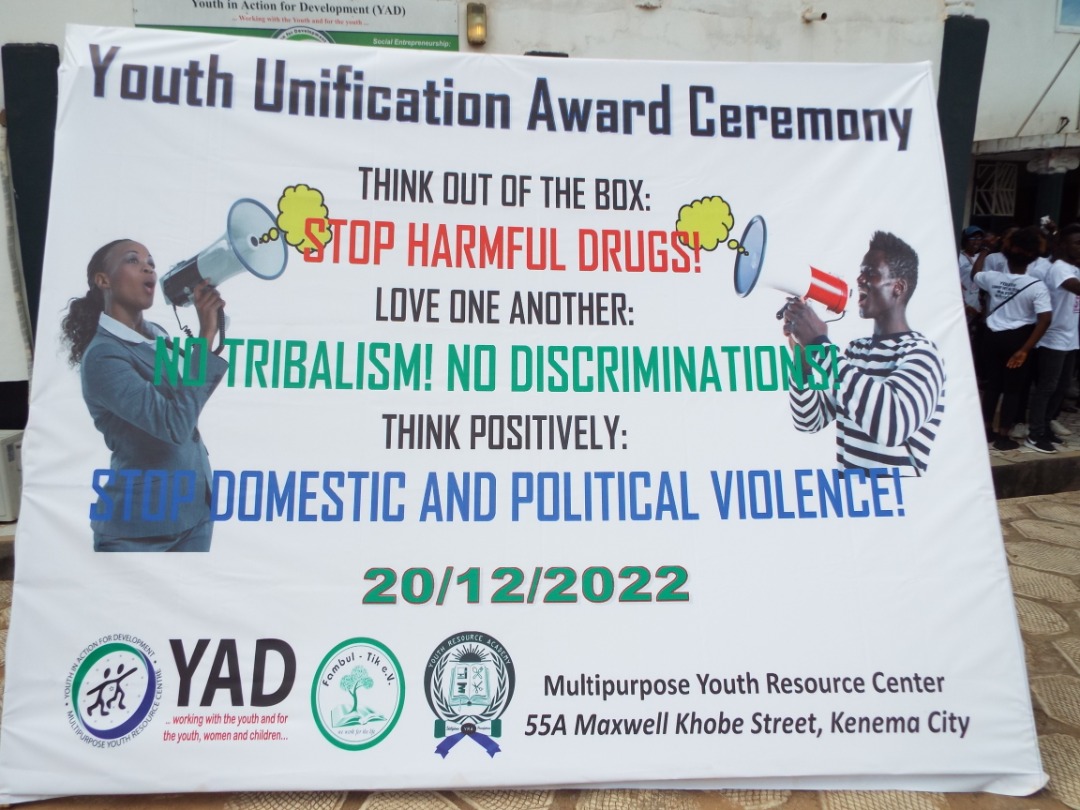 “As we prepare to celebrate Christmas and New Year in few days’ time, and go to the poll by mid-2023”, she said, “we would like to use this platform to reiterate our usual message of peace and unity with special slogans: THINK OUT OF THE BOX: STOP USING HARMFUL DRUGS, ESPECIALLY KUSH. We know that you are using those drugs out of frustration about your life. This is not a good remedy; please stop it now before it ruins your life!”

“Our second slogan is: THINK AND ACT POSITIVELY: STOP DOMESTIC AND POLITICAL VIOLENCE. If someone disturbs your peace, or you find yourself in a precarious situation, please go to the police or local authorities. Or you can simply seek advice from YAD; YAD has a conflict mediation and resolution platform for the youth. Please do not respond to violence with violence. An eye for eye principle can only make the whole world blind”.

“Our third and final slogan is: LOVE ONE ANOTHER, STOP TRIBALISM, STOP DISCRIMINATIONS. Let us just see each other as Sierra Leoneans, not as Temne, Fulla, Mende, Madingo; let’s stop discriminating against each other because we don’t speak the same tribe, we don’t hale from the same region, we don’t belong to the same political party; and we don’t go to the same church or mosque. Let us see one another as one great nation called Sierra Leone”, she concluded. 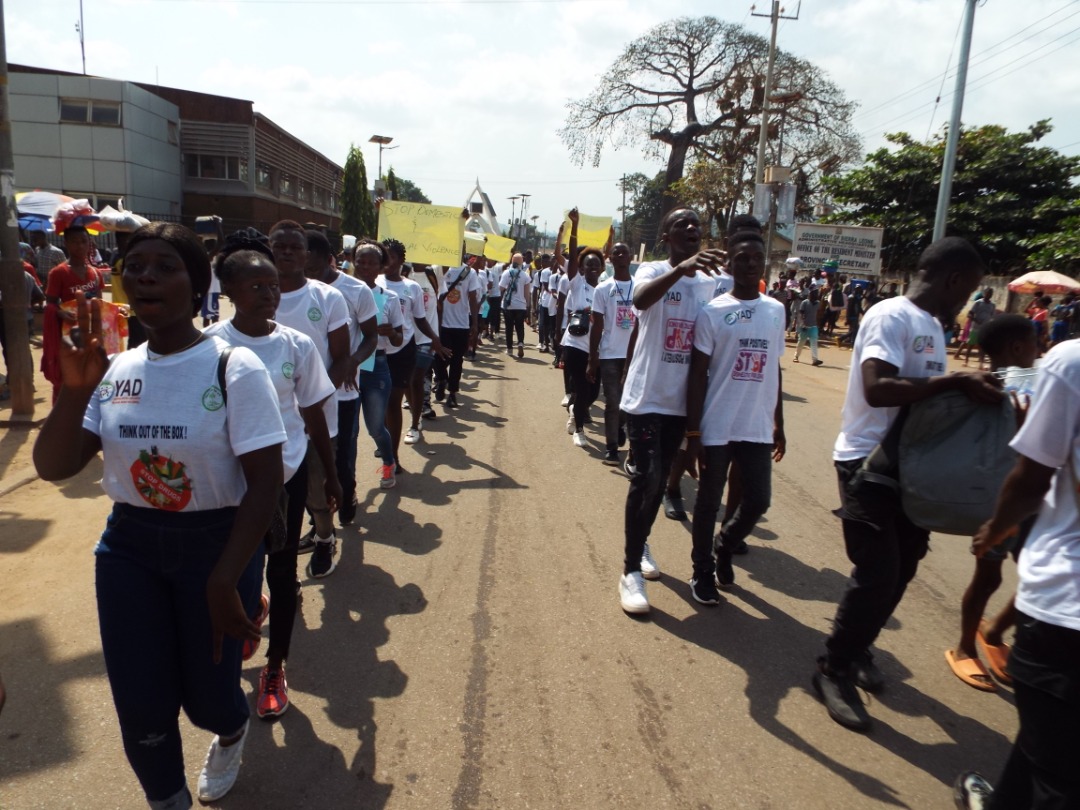 Speaking to the audience via podcast, Othman Sheriff, Project Coordinator of Fambul Tik, who co-financed the program, thanked the staff and management of YAD and all the participating youth organizations for their continued contribution to peacebuilding in Sierra Leone. He further revealed that the Covid-19 and Russian-Ukraine war have adversely affected the world economies and that even wealthy donors have drastically reduced funding to deserving projects in developing countries as they divert most of their support to projects that internally serve their own citizens.

He further explained to the youths that the Sierra Leonean economy is among those seriously affected, forcing business enterprises to either shut down or exponentially increase the prices of essential commodities to catch up with the spirally depreciating rate of Leones to USD. “The central government is sandwiched between delivering on its electoral promises, such as infrastructural development, combating corruption in high places, improving the quality of education for its citizens, on the one hand, and resisting the adverse socioeconomic effects of Covid-19 and the Russian/Ukraine war, on another” , he stated.

“Unfortunately”, he said, “Some ill-motivated citizens have even used the situation to trigger fracas in peaceful communities. We have witnessed a purported peaceful protest against the hike of prices culminate into a bloody theatre that saw many compatriots dead, including uniformed men, and billions worth of properties torched to ashes, including police stations.”

He further lamented on how countless number of girls are fleeing the country as domestic workers in the Middle East, often abandoning their beloved ones, including children. No sooner they arrive than they start crying foul of domestic abuse and human rights violations by Arab employers, regretfully soliciting repatriation support from our cash-trapped government. The boys have coined the word “temple-run”, meaning to trek through the dreadful Sahara desert and the Mediterranean Sea in search of greener pasture. The few lucky ones who make it beyond the sea soon face the gallows of institutional and racial barriers that aggressively exclude them from all they had hoped for, which remind them of the saying: “there is no place like home””.

He concluded by saying that the youths need a sincere, conceivable and realistic rescue plans that would make them regain confidence in their home, feel at home, be safe at home, be happy at home,  love to be  at home and proud to be  Sierra Leoneans…” 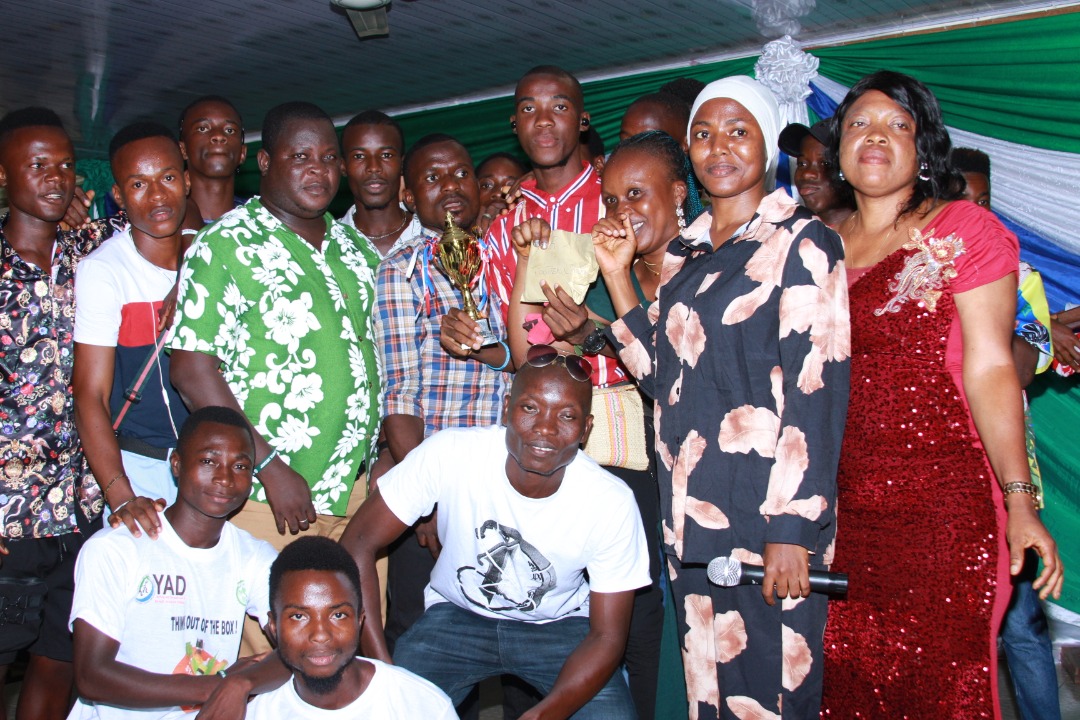 Speaking on the role of sport in peacebuilding and national cohesion, Kumba Zainab Brima, current top scorer-Sierra Leone Female Premier League, admonished her fellow youths to embrace sport and peace, highlighting the facts that sport is the only game that speaks a single language. “Once you are in the pitch”, she said, “you should obey authority which is the referee and all your actions must remain within the ambit of the rule of law or else you would be penalized on the spot”. Zainab further encouraged her fellow youths not to only see sport as way of getting some money but also to foster peace and cohesion at grassroots level. 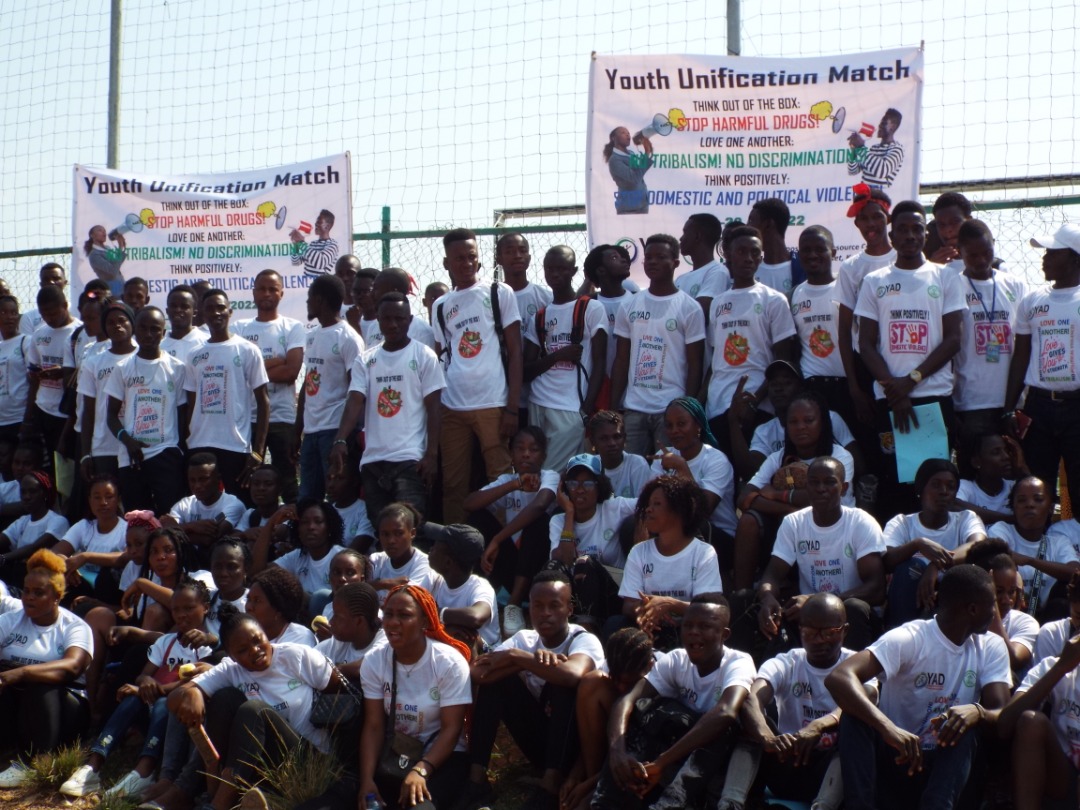 All stakeholders buttressed the same message of peace and the importance of unifying the youths and empowering them to become role players in decision-making, underscoring the timeliness of the event as the country approaches presidential and parliamentary elections by mid-2023. They also promised to support YAD emotionally, morally and politically in all its ventures. 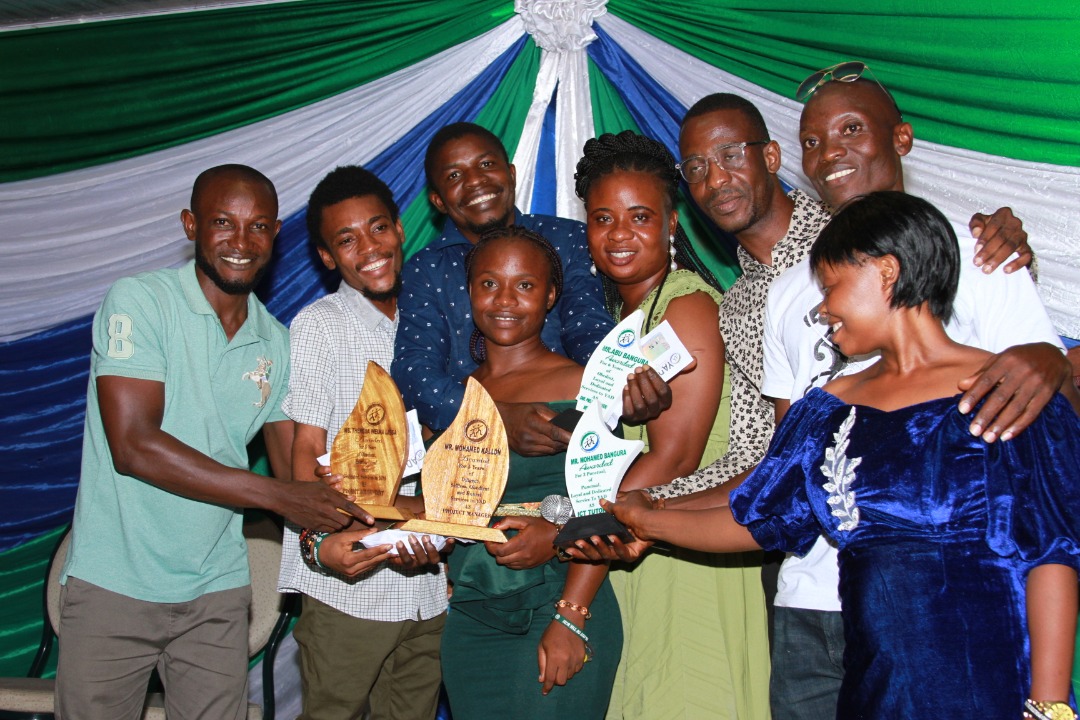 As usual, the organization formerly presented the special Unification Awards in the sum of four thousand new Leones (SLE 4000) for the winners of football/volleyball and three thousand six hundred (SLE 3600) for the losers.

The organization also awarded key staff of its ranks and files who had rendered outstanding services over the years. Those awarded include the Project Manager, Mohamed Kallon, who spearheaded the event; the Project Accountant – Theresa Weima Lissa; the Chief Instructor and ICT Tutor – Mohamed Bangura; and the Snr. Driver and Mechanic – Abu Bangura. 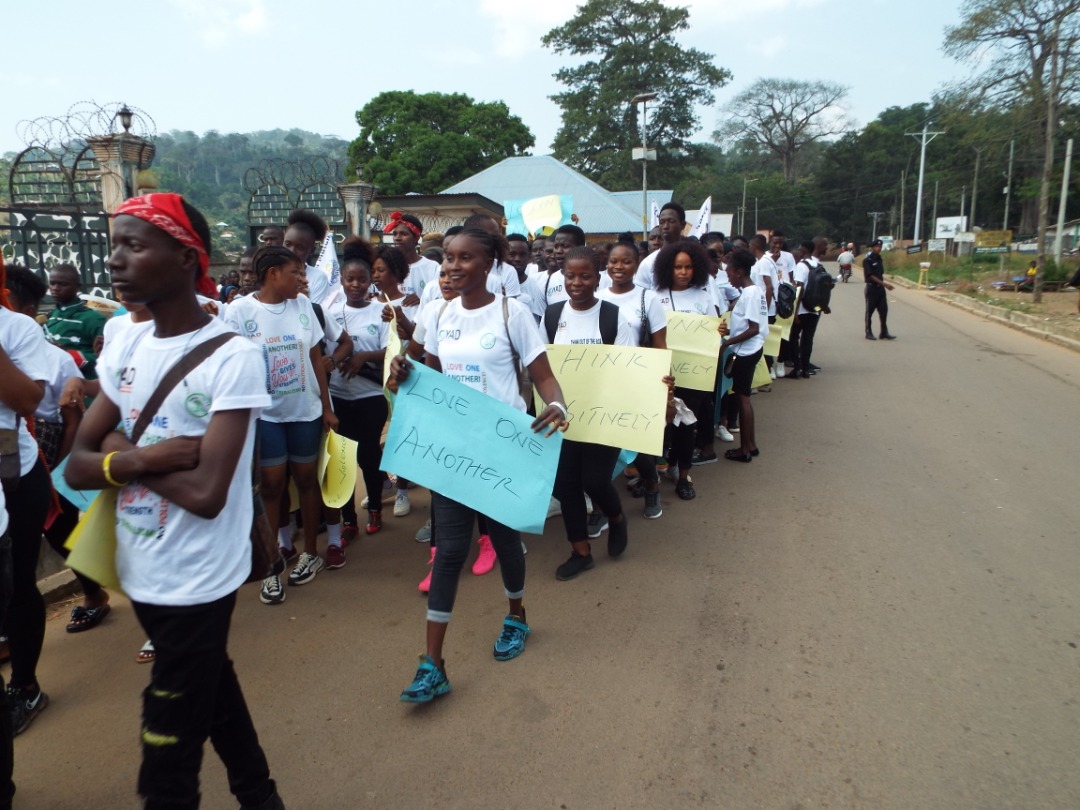 The youths led by  Foday Zoker, the Event and Social Mobilization Officer, presented a drama against violence, which touched the heart of every audience.

Key representatives of various youth groups were invited to give vote of thanks after which the guest artist, Bartholomew Membui aka Master Talent overwhelmed the stage with a special peace song for the youths.