Youth in Action for Development (YAD), a voluntary youth serving agency based in the eastern administrative capital of Kenema, has on Saturday, 12th January, 2019 inaugurated its newly constructed headquarters and Multipurpose Youth Resource Centre (MYRC). The occasion which attracted all stakeholders across the region, was organized in the Peace and Unity Hall which is also a part component of the project.

In his key note address, the Resident minister east, Hon. Andrew Ansu Fatorma thanked the staff and management of YAD and their donor partners for such a unique and magnificent job.  He further stated that as a government and as elders of the society, they have an obligation to give support to the youth of the day at all times. He said the first flagship program of the current government is education for the youth which is what YAD is working to promote. He therefore assured the management of YAD of his fullest support to make the MYRC project sustainable. He said the youth need to be thoroughly guided so that they can be meaningfully useful for the nation. 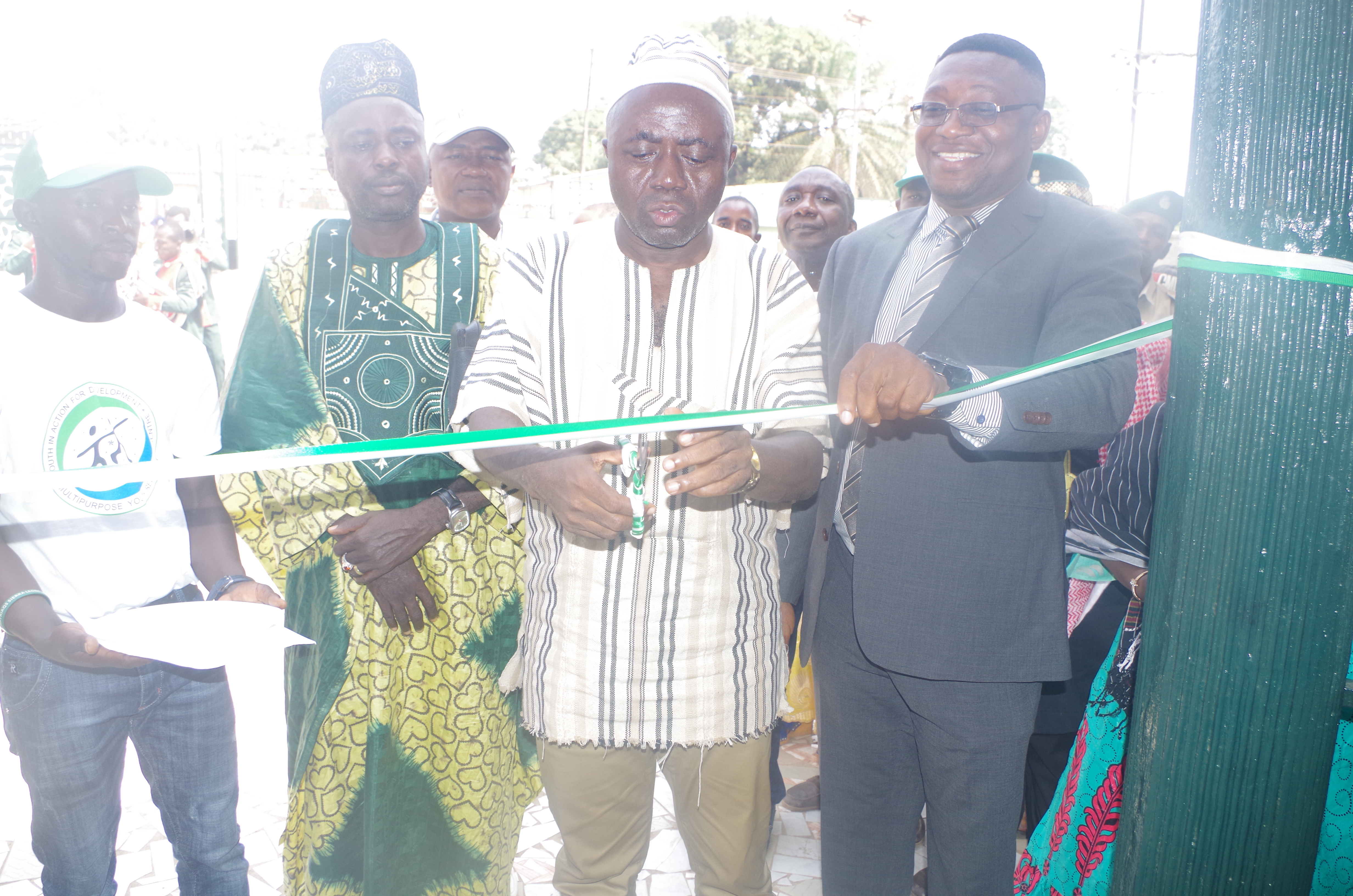 The minister however cautioned the youth to be focused in learning from the elders, adding that the time they will take over from them it will just be a continuation of duty in the interest of national development.  He then assured his audience of government’s continues support for the youths in the nation. He appealed to all to make good use of the new facility as it belongs to them all.

The chairman Kenema District Council, Mohamed Amadu “O” Level Sesay, in his statement also thanked the staff and management of YAD for the good job and called on the youth to always work as a team and he cautioned them to stop the issue of pulls him down syndrome, and for them to continue working together as a unit, adding that he is in the council to protect the affairs of the youth at all times.

Giving brief background of YAD/Fambul Tik’s success stories including the Multipurpose Youth Resource Centre project, the project Coordinator, Simma Sheriff, said that the two organizations share the view that young people can only feel safe when they have proper education, skills-know how, secured jobs, and reliable sources of income. This also means that unhindered access to justice, the right to decide with whom to live or associate, healthy and sound family life, affordable housing, hubs and co-working spaces, learning centers such as schools and community libraries, good recreational centers such as theatres and sport complex, and more promote this view. This is the reason why the staff and volunteers of the organizations had been living with serious apprehension regarding the unstable nature of the rented space they have been using as an office. In “May 2017, the organization successfully hammered home its proposal to erect a “Multipurpose Youth Resource Centre (MYRC) which should serve as its own headquarters and a true “safe space for youth” in the region”, he stated.  He then explained that the project was co-funded by the German Federal Ministry of Economic Cooperation and Development (BMZ), Fambul Tik e.V. and YAD, and that it entails three major phases, each with distinct features.

MYRC phase two entails mainly diverse skill training facilities. The objective is to facilitate access of under privileged youth to high quality skills, which could enable them become self-reliant and economically independent. It includes dressmaking, cosmetology, catering, secretariat and office management, screen printing and sport. The sport component provides many modern sport apparatus such as gymnastic gadgets, billiard, table tennis, table football etc. This phase, when successfully completed, shall be called youth Resource Academy (YRA) and it shall turn the MYRC into the safest youth kingdom in Sierra Leone. This project is currently ongoing with the hope of completing it by December 2019.  Phase three shall be the general and continues management of the entire facility.

The organization also used the occasion as an opportunity to display to the pubic the King Hamad Award for Youth Empowerment to Attain the Sustainable Development Goals which they won early 2018.  The award, which includes a trophy, certificate of recognition and cash donation, was presented to YAD by King Isa Al-Khalifa of Bahrain at a special occasion organized at his palace in the Bahraini capital of Manama.

Earlier in her statement, the deputy Regional Director in the Ministry of Social Welfare, Gender and Children Affairs (MSWGCA), Mad. Alice Jeneba Koroma who chaired the ceremony, said that the business of the youth, women and children are on the center heart of her ministry and it’s a flagship of the central government’s New Direction Agenda.

The programme started with a youth cohesion match between Action Star Youth Club (ASYC) and Burma One and Tow (BYDA) as one team, and Pujehun Youth Developmental Organization (PYDO) and Ultimate Family as another.  While the female wing of the former won the volley match the male wing of the later won the football match.

Earlier in her statement, the chairperson for the ceremony who also doubled as the deputy Regional Director in the Ministry of Social Welfare, Gender and Children Affairs (MSWGCA) madam Alice Jeneba Koroma said that the business of the youth, women and children are on the center heart of her ministry and it’s a flagship of the central government’s New Direction Agenda.