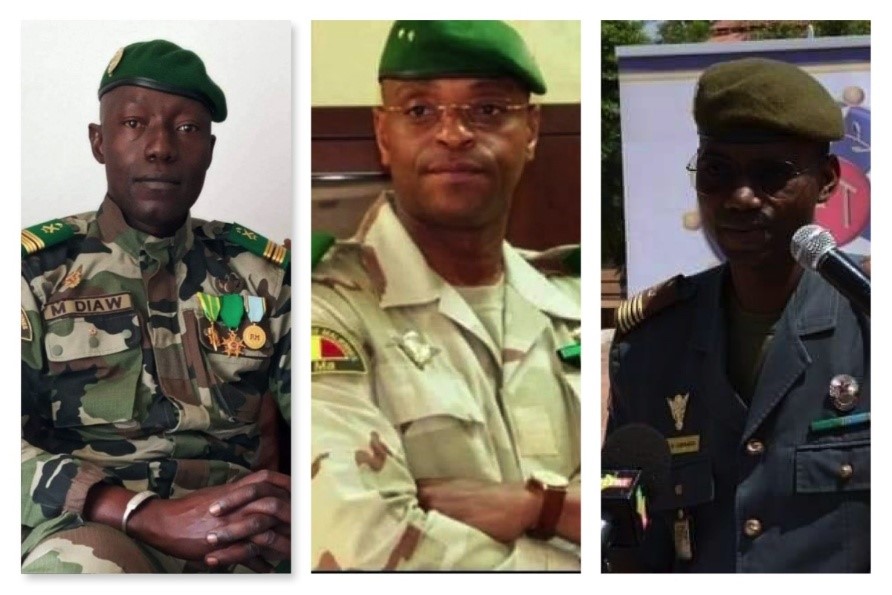 The President of Mali, Ibrahim Boubacar Keita was seized and detained with his Prime Minister Boubou Cisse by the military yesterday. Initial reports indicate that what started as a mutiny is becoming a full-blooded coup d’état. In a televised address, Mr Keïta said he was also dissolving the government and parliament. "I want no blood to be spilled to keep me in power," he added. Poignant (BBC-19/08/20) The soldiers who took part in the mutiny cum coup d’états stated that they were doing so because of their pay, corruption and the continuing conflict with jihadists – as well as widespread discontent with the former president. Mali has recently seen large protests by the people because of the worsening economic situation.

In response to the situation in Mali, “The Economic Community of West African States (Ecowas), a regional body, also said its 15 member states had agreed to close their borders with Mali, suspend all financial flows to the country, and eject Mali from all of Ecowas' decision-making bodies” Mali's former colonial ruler, France, was also quick to condemn the president's detention, and Foreign Minister Jean Yves Le Drian urged the soldiers to return to barracks (BBC). It should be noted that in recent months, Ecowas has made attempts to mediate between Mr Keïta's government and opposition groups, with little success.

I wrote in my last article quoting JF Kennedy that, those who make peaceful revolutions impossible make violent revolutions inevitable. And this has nothing to do with wishful thinking but based on the modus operandi across the African continent. We know that following the “Arab Spring” that saw the forceful and violent removal of leaders like Ghaddafi and Hosni Mubarak, a new whiff of African democracy was in the air. African countries and especially the ECOWAS committee adopted a policy of Presidential two term limits. Although it was controversial for the majority, but gems like Sierra Leone and Liberia heads of state at the time took heed and observed the plan. Unfortunately, it is becoming increasingly peculiar that Franco phone countries are not only dragging their feet over the implementation of the presidential two term limits, but also trying to circumvent it. As we all know, the presidents of Togo, Cote D’Ivoire and Guinea have contrived to doctor their respective constitutions in order to remain in power. And you can bet your bottom dollar, that these French leaders enjoy all the blessings they can get from their colonial master, France.

It is no wonder that France was one of the first western countries to condemn the actions of the Malian military. As we all know, Mali is a key base for French troops fighting Islamist insurgents across the Sahel region. But it goes deeper than that; for France will support any French leaning stooge. Just check out the French hypocrisy condemning the military, as against that of their handwork in the assassination and toppling of the Sankara government. Blaise Compoare received an unadulterated blessing and support from the French then. But like we all know, Blaise was removed from power in similar circumstances; when he tried to play wordsmith the constitution. This is what happens when the people feel subjected to imposed leadership.

I do not support military takeovers or any form of interregna in Africa. Conventional wisdom has it, that the best military government is equal to the worst civilian government. If anything, it is the fastest way to move from civilian democracy to authoritarian dictatorship. Military interventionists have always presented themselves as moderates and unifiers in the initial stages. But you give them an inch and with time, they will take a yard and metamorphosise into the worst dictators. That is all the more reason why the term “military intelligence” can sometimes be a contradiction in terms.

But it should be noted that as one of the possible after- births of the Arab Spring, which seemed to shine a torch for our African leaders, the presidential two term limit was not only regarded as one of the fairest attempts at democracy, but that it will act as a political  antidote. But some of our political leaders are learning to fly without perching, and it is becoming increasingly possible that Africa may sadly and regrettably return to its bad old ways. Any resemblance with the Zimbabwe -Mugabe situation?  Some African leaders are making it impossible to lead within the ambits of commonly agreed constitutional terms. Their thirst for power and their addiction to corruption is suggestively proving too irresistible.  Our African leaders can be so powered drunk, that not even the Mo Ibrahim Prize of $ 5 million initial payment, plus $200,000 a year for life, is tempting enough for our African leaders.

The irony of all these lies in the roles of our regional and international bodies. As expected, ECOWAS 15 member states has been quick to threaten Mali with financial asphyxiation, the closure of its borders and to ostracise Mali from its “decision-making bodies”. What decision? That is rich, coming from a committee that cannot force its members to adhere to a commonly heralded policy of two term limits for Presidents.

This is the kind of hypocrisy that is beginning to lose traction with the people. A committee that is expected to serve for the common good of the West African populace is seen to be blatantly engaged in exercises of self preservation.  The rise of the people in their respective countries is regrettable but unavoidable; thanks largely to the systematic disenfranchising of the people.

If the modus operandi in countries like Guinea, Togo, and Cote D’ Ivoire, to name but a few, are anything to go by, there seems to be an undercurrent of political upheaval that threatens to plunge the continent into another era of destabilisation. I am aware that this may sound negative and like the sales pitch of a merchant of doom. But let us be realistic that democracy has hardly worked for Africa and Africans. As a concept, it could be the nearest we can come to safe, peaceful and fairer societies. But in practice, we know that this is not the case; thanks to our pre-disposed allergy to accountability, rule of law, tribalism, nepotism etc. And thanks to our penchant for corruption and attracting violence. It is easy to appear unhopeful, but current situations across the globe do not make for good reading. The COVID has given enough cover for many governments to quarantine their people, the rule of law, and accountability; Others have used corruption as a vaccine to politically hypnotise the majority.

There is no doubt that the world is facing a leadership vacuum; thanks to the ineptitude of Donald Trump. Sadly, the world is being treated to a spectacular attempt by Donald Trump, to demolish the once acclaimed American democracy. In the absence of the World Cup, The European Cup and The African Nations Cup tournaments thanks to COVID, the daily brutalisation of Americans by Americans in America has become a spectator sports. It is no wonder that when Hong Kong authorities unleashed a brutal attempt to quell protests, America found itself lacking in the moral authority to comment. America cannot comment on what is going on in Belarus; for it will be a case of the pot calling the kettle black.

So, with ECOWAS proving to be a mere talking shop, and with an attitude to close the barn door when the horse has bolted, I wonder where the referees for continental political matches are going to come from. The hope is that ECOWAS will find the will power to stop the likes of Alpha Conde, Quattara, and Eyadema to shield away from pressing the reset and self destruct buttons. Africa cannot afford an “African Spring”, nor a return to the old. When the people applaud the soldiers on the street, it is not out of faith but desperation. This is what happens when the idea of democracy has been stripped of its moral imperatives, and replaced with hollowness and hypocrisy.

Don’t expect foxes to vote for the welfare of chickens.