A young professional and philanthropist, Mahawa Sandi in her own capacity has provided food and water to the medical teams and victims of the tragic fire incident that occurred in the Wellington community in Freetown that are currently hospitalized at the Connaught and 34 hospitals. The donation was done on Sunday 7th November, 2021.

It could be recalled that on Friday 5th November, 2021, a terrible fire explosion broke out in the east end of Freetown. The explosion was caused by a leaking tanker that was hit by a truck which had lost control due to brake failure. The entire area was burnt down to ashes in which cars, motor bikes and humans were involved. It is believed that more than 100 people were trapped in the fire. This incident has attracted many humanitarian organizations and individuals to give support to the affected families. 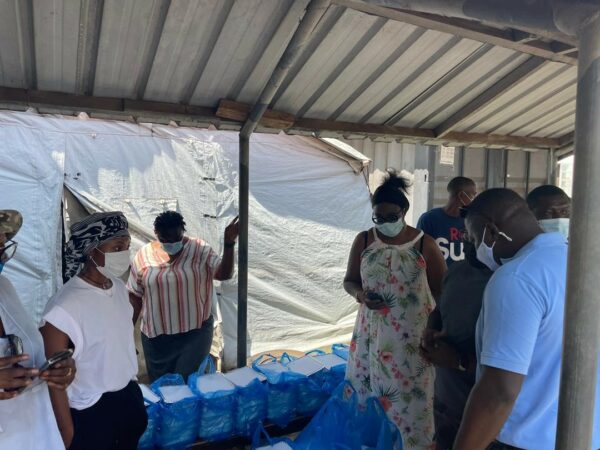 Delivering the items, Mahawa Sandi said she believes in doing small things with great love and that these people need people like her to be there for them. She added that she realized that there are lots of people including medical staff that are putting extra effort to make sure that the hospitalized victims are well taken care of, noting that the chances of survival for the hospitalized depends on the dedication of the medical staff.

She expressed her heartfelt sympathy to the affected families and promised her continued support with the little she has. She also thanked the frontline workers who are doing their best to see that the hospitalized get good care and attention. She urged them to do their best to seeing that those in the hospitals get the required treatment. She called on other organizations and individuals to step in to help the victims’ families.

The medical staff present appreciated Mahawa’s effort and thanked her for the donation, saying it is timely and used the opportunity to call on other individuals to emulate her example.