Latest headlines
PORTO SANTO STEFANO, Italy — Three people died and several were missing Saturday after an Italian cruise ship with more than 4,000 people on board ran aground and keeled over, sparking scenes of panic.
"There are three certified dead," Giuseppe Linardi, the top public security official in Grosseto told Italian media, explaining that difficulties in the rescue had led to confusion over the death toll which was put at six earlier.
The Costa Concordia was on a trip around the Mediterranean when it apparently hit a reef near the island of Giglio on Friday as passengers were sitting down for dinner. Some of the passengers jumped into the icy waters.
"There were scenes of panic like on the Titanic. We ran aground on rocks near the Isola del Giglio. I don't know how this could happen. The captain is crazy," Mara Parmegiani, a passenger, was quoted by Italian media as saying.
"We were very scared and freezing because it happened while we were at dinner so everyone was in evening wear. We definitely didn't have time to get anything else. They gave us blankets but there weren't enough," she said.
Cruise ship worker Fabio Costa was quoted by the BBC as saying: "Everything just started to fall and everybody started to panic and run." 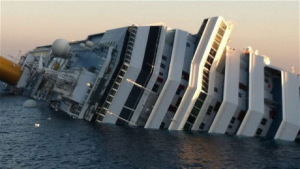 "We had no idea how serious it was until we got out and we looked through the window and we saw the water coming closer and closer. Everything happened really really fast," he said. "Everybody tried to get on the boats but people started to panic so they were pushing each other and the crew was trying to help. A lot of people were falling down the stairs," he added.
"It took hours for people to be able to get off the ship."
Linardi added that it was not possible to determine how many people were still missing until the inspection of the boat was completed. "We cannot rule out at this stage that there are people missing, we are waiting for the reports from the divers who will verify whether or not there are still people in the submerged part (of the boat)," he said.
"Since there was a lot of panic and some people jumped into the sea, it may be that some could not be rescued," he added. Local officials also said at least 14 people were injured. Around 20 people were rescued by helicopters, which scoured the sea with searchlights during the nighttime rescue operation.
Shocked passengers crammed into the island's few hotel rooms and a local church overnight. Hundreds were being transferred by ferry to the Tuscan resort town of Porto Santo Stefano, which is linked to the Italian mainland. Luciano Castro, another passenger, was quoted as saying: "We heard a loud noise while we were at dinner as if the keel of the ship hit something."
"The ship started taking in water through the hole and began tilting." One unnamed passenger quoted by the ANSA news agency said: "It was hell." "They told us to stay calm but you could see the fear on everyone's faces, including the crew," he said. Silvana Caddeo said: "They told us over the loudspeakers that it was an electrical fault to keep us calm. "But people were shouting, children were crying and all the lights went off. It was a nightmare," she said.
Francesco Paolillo, a local coast guard official, said there was a 30-metre hole in the ship but that it was too early to say what exactly had happened. "We think this happened as a result of sailing too close to an obstacle like a reef," he said.
One of the victims was a man in his 70s who died of a heart attack caused by the shock to his system when he jumped into the sea, reports said. Passengers were initially told the ship had shuddered to a halt for electrical reasons, before being told to put on their life-jackets and head for lifeboats.
The Costa Crociere company, which owns the vessel, said it was "shocked" by the news and expressed its condolences to the families of the victims. The company said it was not yet possible to say what caused the problem, but that the evacuation had been fast, although made more difficult as the ship took on more and more water and keeled over.
The ship left the port of Civitavecchia near Rome on Friday at the beginning of the cruise and was headed for the port of Savona in northwest Italy. It was then scheduled to visit the French port of Marseille and Barcelona in Spain.
"There were around 1,000 Italian passengers on board, as well as 500 Germans and around 160 French people," the company said. Italian media reported there were also Indians and Japanese on board.
The cruise ship boasts of 58 suites with balconies, five restaurants, 13 bars, five Jacuzzis and four swimming pools.