s election time in Sierra Leone, politicians always present catalogues of unfulfillable promises to the gullible and less informed voters. Some even promise constructing bridges where there are no rivers. Reduction of poverty, less corruption and improved healthcare, which are among the most desperate needs of the people, are always placed in the topmost columns of political manifestos.  The deepest secret which they never disclose to the voters however, is the fact that all their promises depend on donor funds.  And the most appropriate questions which the voters never asked are: when and how shall you fulfil your promises? Where would you get the funds? In terms of self-esteem and independence, there is no difference between the government and local community based organizations, hence they all depend on donor funds. The only difference is that the government can sign huge loan agreements, disburse it and pocket it in the name of the people with impunity.

That brings me to President Koroma’s public pronouncement of his disappointment with the international community when they failed to respond to his multimillion dollar demands to fight Ebola in Sierra Leone. "I am disappointed at the international community in their delay in responding towards the fight against the deadly Ebola virus in Sierra Leone," the President said on Monday 11th August. "We have not been provided with enough equipment, resources, qualified health officers, and we have lost the only expert we had in the country to the disease amidst the declaration of the international health emergency on Ebola", he stated.

When looked at the statement critically, I felt an excruciating pain down my spine because it clearly tells that our government cannot exist without donor funds.  Of course every Sierra Leonean, including myself, expected the international community to come to our aid because we know that our government is impotent to fight Ebola. But President Koroma’s statement sound as if the international community was responsible for his own impotence and ineptitude to protect his own land.

New Ambulance ArriveIn the last couple of days however, it seemed that President Koroma’s government has received the kind of attention he has been yarning for: donor funds. New ambulances, drugs and physical dollars have been received from the international community, which, unfortunately, his usual praise singer journalists are announcing with diverse deceptive and shameful captions: President Koroma Imports Ambulances, President Koroma Has Done it Again, President Koroma Intensifies the Fight Against Ebola etc. In fact, the ambulances are believed to be a special loan from the United States government. We have quickly seen a long list of potential payees (of donor funds) published. What is really, really shameful about it however, is the unrealistic nature of the list.  How could the Health Ministry convince the international community to believe there are 12,608 personnel engaged in the fight against Ebola in a country of just 6 million people? This exclude medical doctors and foreign experts who have come in to help.  We also know that the virus is only affecting some districts in the country with Kailauhn, Kenema and Port Loko on the highest.  The government has approved an $18.2 million dollars voucher for a period of six months.  According to the voucher, there are 1500 staff assigned at treatment centres. How many treatment centres are there in the country? We only know Kailahun, Kenema and Freetown.  The voucher is also assigning 8000 staff in affected communities, to do what? If they are no contact tracers, no lab technicians, no burial team, no screening personnel, no doctors, no nurses, no journalist, what are they doing then? Does this include the police and soldiers who are enforcing the blanket quarantine against Kenema and Kailahun? I wish someone could tell me… 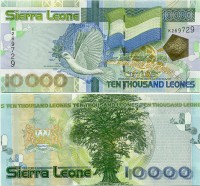 The public is donating on a daly basisBeside donor funds, the central government is currently rich with billions of Leones received from private citizens, parastatals, public institutions and companies in the name of Ebola fight. Alone, on Thursday 11th September, state house received one billion and three million, five hundred and fifty-one thousand Leones (Le 1, 003, 551,000). Such donations have been pouring in on a daily basis for several weeks now. Public donations to the fight against Ebola has even become more political than humanitarian as we see cash trapped institutions of higher learning, which could not afford to pay lecturers, donate millions of Leones to the Ebola fund.  If the government is really sincere about protecting its citizens, why not use part of this money to help Dr. Olivette BUCK, another Sierra Leonean medical doctor who is slowly dying now of Ebola? Are we going to wait for western partners as usual? We have seen Americans and British flying out their citizens when infected and treated them till they recovered. Yet they say the experimental drugs are either undergoing clinical tests or not enough for massive prevention of poor Africans. Why not copy from their own pages for heaven’s sake? Two months ago it was Dr. Khan and dozens of medical nurses, few weeks ago it was Dr. Cole and physician specialist Dr. Rogers, is it going to be Dr. Olivette BUCK today or tomorrow while awaiting donor funds?

How long shall we continue to depend on foreign aids? Take a look at this humilating video published by an American news outlet