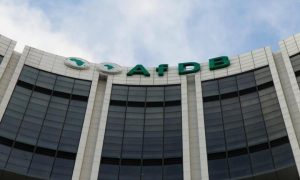 The headquarters of the African Development Bank (AfDB)

February 28, 2017 – Agriculture, agri-business and agro-industries will dominate the knowledge events of the 2017 Annual Meeting of the African Development Bank Group scheduled to take place from May 22-26 in Ahmedabad, in India’s Gujarat State.

The central theme of the Annual Meetings, “Transforming Agriculture for Wealth Creation in Africa,” underscores the critical importance of agriculture in the Bank’s work in particular and in Africa in general. It also provides a good opportunity for India, cradle of the “Green Revolution” to share its experiences with thousands of participants who will attend the Bank’s foremost annual gathering.

India’s Green Revolution is known to have been prompted by the 1943 Bengal famine, which claimed about four million lives. The country continued to face food insufficiency challenges up to the 1960s when it revolutionized traditional food production practices by introducing new agricultural techniques with high-yield crop varieties accompanied by chemical fertilizers, pesticides, germicides, herbicides and weedicides. Irrigation and storage infrastructure were also put in place to ensure food self-sufficiency.

As a result, India produces enough food to feed its 1.3 billion people with surplus for export, including garri, an important staple in parts of African, which Delhi currently exports to the continent. The AfDB is focusing on as robust continent-wide agricultural programme, which aims to make the continent food self-sufficient.

The Bank’s “Feed Africa: Strategy for Agricultural Transformation in Africa, 2016-2025,” aims to scale up agriculture as a business through value addition, led by the private sector and enabled by the public sector, and using innovative financing mechanisms, with a view to end hunger and rural poverty in Africa in the next decade.

It is the second of the Bank’s High 5 priorities – Light up and power Africa, Feed Africa, Industrialize Africa, Integrate Africa, and Improve the quality of life for the people of Africa – a blueprint for the implementation of its Ten Year Strategy 2013-2022.

The idea is to drive transformation through 15 priority commodity value chains in given agro-ecological zones specifically to achieve self-sufficiency in key commodities such as rice, wheat, fish, palm oil, horticulture, cassava. Then the goal is to move up the value chain in key export-oriented commodities like cocoa, coffee, cotton, and cashew; create a food-secure Sahel in sorghum, millet, livestock; and realize the potential of the Guinea savannah in maize, soybean and livestock.

The Feed Africa strategy seeks to confront the dismal situation of a continent that spends US $35.4 billion on food imports annually despite being home to 600 million hectares of uncultivated land or 65% of the world’s undeveloped arable land. Besides, about 70% of Africa’s population and 80% of the continent’s poor who live in rural areas depend on agriculture and non-farm rural enterprises for their livelihoods.

These are some of the issues that participants at the meetings will address, under topics such as the Presidential Panel on Transforming African agriculture: Views from the Leaders; Financing Agriculture: Where to Find the Money?” Women in Agriculture; Energy Solutions to Boost African Agriculture; from cotton to clothing – let’s integrate Africa; Innovative technologies for agricultural transformation, as well as numerous exhibitions on the agriculture theme.

India joined the African Development Fund (ADF), the concessional arm of the AfDB, in 1982 and the African Development Bank a year later. The country is a key member of the institution’s 24 non-regional member countries, which support the ADF. In 2016, India pledged US $18.09 million (INR 1.25 billion) for the 14th replenishment of the ADF, and also pledged a bridge loan of US $14.94 million, thereby increasing its burden share by 12.6%. Delhi continues to strengthen its relations with Africa, accounting for investments estimated at US $7.4 billion, mostly lines of credit channelled through the Export-Import Bank of India, for the implementation of projects across Africa.

For more information on the 2017 Annual Meetings, please visit: www.afdb.org/am