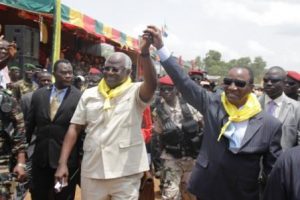 Hon. Susan E. Rice – United States Permanent Representative to The United Nations, although I applaud the United Nations for halting ethnic wars in Africa, I must bring to your attention some fresh intentions of war and ethnic disunity, as African dictators have proven to be the bane of African development.

They have ruined our African way of life with unnecessary wars, causing human misery and destruction of the African continent. In 1998 the late Guinean president, Lansanah Conteh, sent a mechanized army of Guinean soldiers to occupy Yenga, a village in Sierra Leone.

The carnage in Sierra Leone and Liberia had ended, but the Guinean soldiers stayed behind in Sierra Leone with their heavy tanks and other military equipment. They met the poor and unarmed Kissi in the area, beat them, even killed many, and then went inland to occupy more villages in the Kissi chiefdom.

Their bid to take over the villages there was short-lived, because the chiefs stood up to them and drove them out of those villages. However, they still occupy the Kissi village of Yenga to this day.

Madam Ambassador, the village of Yenga belongs to Sierra Leone. No one can dispute that fact. In 1912, a treaty between Britain and France – the former colonial masters, demarcated the border between Sierra Leone and Guinea.

Also, at a conference in Dakar on September 7, 2004, Guinea agreed to return the disputed border village of Yenga to Sierra Leone, according to a joint communiqué signed by President Tejan Kabba of Sierra Leone and the late President Lansanah Conteh of Guinea.

Although the civil war ended in Sierra Leone in January 2002, the Guinean troops who went to Sierra Leone to support the Sierra Leone government forces against the Revolutionary United Front (RUF) rebel movement still remain in Yenga.

Madam Ambassador, the world has seen the brutality of the Guinean government against its own people.

After gaining independence from France in 1958, the government of the late Guinean President Sekou Toure gave orders to shoot and kill anyone fishing or canoeing on the Makona River.

This river forms the natural boundary between Sierra Leone and Guinea in the northeast, and the area lies at the center of the Mano River Union countries: Guinea, Liberia, and Sierra Leone.

The indigenous people of the area are the Kissi, who live on the banks of Nongoa in Guinea, Yenga in Sierra Leone, and Foya in Liberia.

The Guinean government from the 1950s to the early part of 1970s has killed nearly 10 Kissi fishermen on the Makona River; as the Guinean mistakenly took them to be coffee and cacao smugglers or Guinean farmers who surreptitiously crossed the Makona River at night to sell their products in Sierra Leone.

There, they could gain greater profits, as the Guinean currency was devaluated. Also, Sekou Toure’s government was at loggerheads with the French government and with any country that encouraged the neo-colonialism that President Toure preached feverishly against in his regime.

Madam Ambassador, the brutality of Guinean regimes also drove hundreds of Guineans of all origins across the Makona River, and the Kissi accepted and lodged them in towns like the international market town of Koindu, in Toli chiefdom, and as far as the distant Kissi chiefdoms of Kissi Kama and Kissi Tongi.

Yet, the past Guinean regimes have used the peaceful Kissi people as the bait of genocide and for target practice as they continue to stay in Yenga.

We, the Kissi, will support our government in Sierra Leone to use every ounce of authority, through diplomatic means or military force, to recapture Yenga from Guinean terrorists who have terrorized our poor Kissi kinsmen and abused the territorial structures of our sovereign nation, Sierra Leone.

Madam Ambassador, during the Guinean presidency of the late Lansanah Conteh, rebels attacked Forecariah, which lies less than 100 km from the capital city of Conakry, and where tens of thousands of refugees from Sierra Leone and Liberia were stationed.

In early September 2000, Conteh broadcast an inflammatory statement on state radio and television blaming the rebel incursions on refugees.

This provoked widespread attacks by Guinean police, soldiers, and civilian militias on the already traumatized refugees throughout the Republic of Guinea.

Refugees from Sierra Leone and Liberia were raped constantly and beaten mercilessly; no one reported these incidents. Many refugees were killed across Guinea at that time, and among them were the Kissi.

I am requesting that the Security Council look into this issue as soon as possible, or else reclaiming Yenga by our military force cannot be ruled out. The Kissi in the area have lived in fear for their lives, since the Guinean soldiers have been subjecting them to unnecessary and constant victimization.

No schools have functioned, and villagers have been stopped from laying their farms since 1998, because the Guinean troops have claimed beleaguered Yenga to be part of Guinea.

I do not see any point of further negotiations on this matter, since Yenga is in Sierra Leone. How can any army from a neighboring country cross a river and usurp the soil of another country?

Madam Ambassador, I urge the United Nations Security Council to give this matter its most urgent attention.

Tempers are flaring for the positive eviction of a brutal Guinean army from the soil of our sovereign nation, Sierra Leone, and for the Guinean terrorists to stop brutalizing our unarmed and poor Kissi kinsmen and kinswomen in the Yenga area.

Her Excellency Ellen Johnson Sirleaf
The President of Liberia
c/o The Permanent Mission of the Republic of Liberia to the United Nations
866 United Nations Plaza, Suite 480
New York, NY 10017