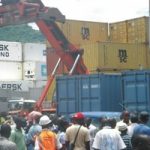 Some aggrieved importers, clearing and forwarding agents and truck drivers, yesterday halted normal activities at the Container Terminal at the Queen Elizabeth II Quay, operated by Bollore Company, over protracted delays and cumbersome processes for clearing of containers at the port.
Several importers, clearing and forwarding agents including truck drivers disrupted normal activities at the Terminal for hours which forced Bollore Company workers to call for the intervention of the Sierra Leone Police to calm the confusion.  According to the President of the Sierra Leone Importers’ Association, Alhaji Tanu Jalloh, cumbersome processes are still impeding clearing of containers at the port, despite the privatization of the port terminal to a French-based company, Bollore Africa Logistics. He said nothing has changed in the container section of the port since Bollore took over in March 2011, particularly in the areas of discharging, scanning and delivery of containers.
The Importers’ President added “undue delays are caused by the Bollore Company in clearing containers at the Terminal thereby creating additional expenditures for the payment of demurrages by importers.”
He said, “Bollore Company is saying that container clearing from the Terminal takes only four days but in actual fact they usually spend weeks to clear containers from the terminal, causing deep financial burden on importers, resulting to price hike on the market on imported goods”.
Abdul Akim Bangura, President of Clearing and Forwarding Association, said Clearing and Forwarding Agents and truck drivers are furious about Bollore Company for causing unnecessary delays in container delivery. He said the Bollore Company has not made any significant difference as compared to the past management, as freight charges and handling fees at the terminal have almost doubled recently without efficient service delivery to customers.
Akim Bangura pointed out that scanning facilities are very poor at the Container Terminal causing more delays for delivery of containers to customers and called for the extension of working hours at the scanning department to expedite the process. He disclosed that in the past “we paid handling fee for 20ft containers at Le 300,000 (three hundred thousand Leones) but when Bollore came it was increased to over Le400, 000, but the services are still poor. “
Explaining about costs incurred by importers at the Terminal caused by delays, Akim said, “demurrage fees which vary from USD$10 or USD$20 per day adds more cost on container delivery which automatically skyrockets commodities on the market”.
Bollore Manager who only spoke on condition of anonymity said Bollore has just entered into a concession agreement with African Minerals for delivery of ten trucks per day for a long period of time; as a result, delays are bound to happen in the process. He said delays are caused along the process due to the use of equipments by clients. “We are aware that there are around thirty trucks on standby within the container terminal. The Bollore Manager also said that the company has two vessels on dock at the port and hoped that the situation will be resolved to expedite the process of container delivery at the port.
After a brief meeting with the aggrieved importers, clearing and forwarding agents and truck drivers, it emerged that Bollore Company will extend working hours for the scanning department to late in the evening to expedite container delivery.
It could be recalled that Bollore Company Africa Logistics was granted concession by the Government of Sierra Leone through the National Privatization Commission in a bid to make the container terminal viable to meet international standards.
However, delays in container clearing at the container terminal is raising fears on the cost of importation into the country which results to subsequent price increment of basic commodities on the market.