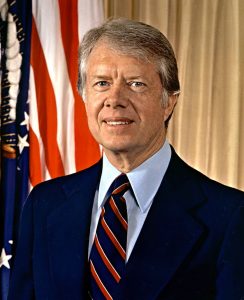 Former US President Jimmy Carter, a one-term president in the late 1970’s, is one of those American presidents whose contributions on the world stage will always be recognized and appreciated for their significance and strategic importance.

The Jimmy Carter Foundation has been a catalyst in bringing peace to a number of chronic conflict areas in the world, especially in the Middle East and Africa. He was the American president who engineered and personally supervised the peace negotiations between Egypt and Israel in 1978, two countries that had gone to devastating wars on both sides for a number of times. And had it not been due to President Jimmy Carter’s diplomatic and negotiation skills, Egypt and Israel were undoubtedly still poised to go through other wars because of the scars that their 1967 and 1973 wars had left on both sides. Each of the two countries was determined to prove their supremacy, Egypt, by regaining all its lands that Israel occupied in 1967, and Israel ,by recapturing part of its occupied land it lost in 1973 war.

The above was the unhealthy circumstance and anarchy that was prevailing between Egypt and Israel until the Camp David negotiations culminated in the 1979 peace accord that both former Egyptian President, Anwar Sadat and the former Israeli Prime Minister, Manheim Begin, signed under President Jimmy Carter’s personal supervision in February, 1979.

There is no denying that both Egypt and Israel have tremendously benefited from their signed peace accord in so many ways. As a result of that peace accord, diplomatic relations were established, trade contracts were signed and citizens of both countries were allowed to visit each other’s country without let or hindrance. Jimmy Carter would always be remembered as the architect of that historic peace accord, which has paid and would pay palpable dividends to generations in both Egypt and Israel.

In addition, the Jimmy Carter Foundation was a major player in ending the long and destructive conflict between Polissario and Morocco after so many failed trials from various regional and international bodies and personalities. Also, President Carter’s foundation has monitored and observed many crucial and sensitive elections around the world; and many a time, he personally and physically took part in such events and conflict resolutions, sometimes risking his life.

Definitely, the above brief recount of former US President Jimmy Carter is not sufficient enough to talk about his so many attributes and humanity aspects and meaningful contributions that he has made over three decades since he vacated the Whitehouse after losing the American presidential elections to former president Ronald Regan in 1980. It has been quite evident that Carter’s loss in his bid for a second presidential term served him as a booster to engage in humanitarian works, which he has, to the testimony and admiration of the entire world, so magnificently and relentlessly carried out over the years.

After all his meaningful and enormous efforts for the sake of mankind, the world has woken up to the shocking news that Jimmy carter has cancer, a disease that has invariably proven to be fatal. The world watched him in an interview on CNN in August after his surgery responding to questions about his health status and how he was feeling as a cancer patient. What was amazing was to see him, despite his pains, displaying the high spirits he has always been known of throughout his life. That was both marvelous and pathetic. However, that was Jimmy Carter the man, the human being and the world renowned and selfless humanitarian figure.

Now, coming to the point, I would like the reader to know that the main purpose of this article is not only to highlight some of the humanitarian aspects of President Jimmy Carter and his countless efforts to world peace, but also, after all the good he has offered to the world, to call him to embrace the faith of Islam before he vacates this world of vanity, which would not allow any living soul to stay permanently.

Well, I think ( I could be wrong in my thought) that the majority of Americans, and probably many quarters around the world, may think of my personal call for Jimmy Carter to embrace Islam as this stage as ridiculous. Calling a devout Christian like the person of Jimmy carter after all his years in Christianity, especially a figure who has once led the richest and the most powerful country in the world, the USA, may be tantamount to nothing but sheer stupidity, in the view of many. Well, I would forgive all those who may think about my humble request in that line.

Nevertheless, as a Muslim and a staunch believer in the Islamic faith, I do not have an iota of doubt that Islam is the truest and most worthwhile current religion so far and until doomsday. I am sorry if this statement of mine may sound offensive to the many faithful followers of Christianity, Judaism, Buddhism and other faiths. I do not mean to offend any or to ridicule any faith. And for the records, one of the requirements of the faith of Islam is that we Muslims MUST believe in all the apostles and prophets the Almighty God/Allah sent to guide mankind to the right path, beginning from Noah to Mohammad. ( Peace be upon them all).

Based on the meaningful and humane services President carter has done for humanity, I, as a Muslim, would personally wish him to die as a Muslim, because I do strongly believe that is what is good for him and that is what may save him from the hellfire in the hereafter. All his works and services to mankind would go in vain if he died as a non-Muslim. My Islamic call stems from my due consideration of Jimmy carter’s selfless service to the beneficiaries of the Carter’s foundation over the years in so many parts of the world. As a befitting compensation for Jimmy Carter, it would definitely be in his best interest to embrace Islam NOW before it is too late. I hope he would heed this call and accept the Islamic faith in due time. Now that he is still alive, he has a golden opportunity to save himself from the hellfire. I hope and pray that the Almighty God/Allah would guide Jimmy Carter to the faith of Islam so that he would die as a professed Muslim.