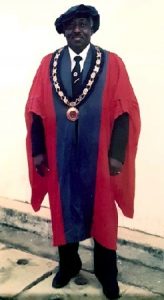 The late Cannon, Dr. Arthur Dave Omopeh Wright, MD, of 8 Wright Drive, Marjay Town in Freetown who prior to his retirement was Sierra Leone’s only ear, nose and throat surgeon specialist died on Wednesday 26 July, 2017 in Virginia, USA.  He was 79.

His son Davey confirmed his death without specification of the cause of death.

He returned to Sierra Leone in 1967 to work after his medical training in Europe.

In 2002, he was appointed Ministry of Health Services (MOHS) Coordinator, Community Based Steering Committee to implement the U.S Agency for international Development (USAID) sponsored Omega Initiative for National Strategy for the Development of Prosthetics & Orthotics and to provide quality rehabilitative services to civilian victims of war while extending services in areas that weren’t encompassed.

On April 27, 2007 Dr. Wright was awarded Grand Commander of the Order of the Rokel by former President of Sierra Leone, Alhaji Dr. Ahmad Tejan Kabbah in recognition for his colossal contribution in the field of medicine, medical education and his services as medical practitioner, an Ear, Nose and Throat (ENT) surgeon and lecturer at the College of Medicine and Allied Health Sciences, Sierra Leone.

As a staunch proponent of the “brain drain” of medical practitioners in Sierra Leone he advocated for the government to address the middle and long-term needs to improve health services and training so as to prevent the departure of medical professionals who were fleeing Sierra Leone to western countries for better pay.

During an interview in 2009 on the state of health infrastructure and medical professionals in Sierra Leone, he told the Integrated Regional Information Networks (IRIN) “Many of the colleagues who trained with me left during our country’s civil crisis.  Brain drain is still a tremendous problem, we lose a lot of doctors to the United States, Saudi Arabia and England every Year.”

Adding, “Even with about 1,000 enrollees at the College of Medicine and Allied Health Sciences and 15 to 20 physicians graduate every year, 75 percent of them will leave the country.  They cannot make a living off of the government salary of $100 per month,” said Dr. Wright.

When questioned why he hadn’t left Sierra Leone to go after better paying medical jobs, Dr. Wright said, “This is my country, I have to give service to my people,” which he did for over four decades.