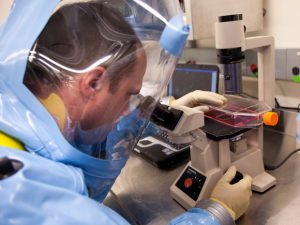 The Ebola virus has and still is claiming thousands of innocent Africans, mostly women and children. Sadly enough, all information leading to its true origin remain fairy-tales.  We have to live with the myths and dilemmas because we lack adequate scientific and technological knowhow to defend ourselves against the virus.  Regardless the intensive sensitization programs conducted by aid agencies, majority of Sierra Leoneans still remain less-informed about the killer virus. All our hopes and trusts lies on foreign assistance and political leadership.

So far, our only major source of information which helps us to determine our fate in the fight against the virus is the daily updates published by the National Ebola Response Centre in collaboration with the Ministry of Health and Sanitation in Freetown. The updates are accepted and appreciated in good faith by every concerned individual regardless the fact that some of the figures are mathematically illogical. This is because we don’t have the means to conduct a headcount of Ebola cases on a daily basis.

What we can’t accept or appreciate however, is the lack of conceivable clarifications on figures published by the National Ebola Response Centre.  That brings me to the following figure published yesterday by the Media and Communications Office:

Note: Missing = sample which could not be traced to a district due to wrong information or data on lab forms

When the Media and Communications Office of the National Ebola Response Centre began publishing the term “Missing sample” few weeks ago, some of us thought it was just a onetime mistake.  But that doesn’t seem to be the case, as the term continue to appear in the updates on a daily basis.  I thank them though for keeping us informed about this irregularity in the labs. To me, the “missing sample” simply implies that the patient is unknown or unrecorded. But wait a minute, who is responsible for altering the record and entering the wrong data?  Certainly no foreigner can imagine doing so. It can only be a Sierra Leonean medic who knows the patient’s identity.

With all the huge donor funds pumped into the country in bid to halt the virus, there still seemed to be a huge gap of inconsistency, lackadaisical and unprofessional attitudes in the frontline. What does the “Missing sample” really mean? Does such a term exist in lab-technology or pharmacology? Why should there be an untraceable sample in the lab in the first place?  It’s true that Sierra Leone is not yet developed to the level of identifying addresses by zone improvement plan (ZIP) codes, but everybody living within the country can be easily identified by a family, town, chiefdom, constituency or district. So why a sample shouldn’t be traced to any specific family, house, town, chiefdom, constituency or district?

Every reader may agree with me that Ebola has proved to be the most dreadful and challenging virus on our planet and the war on it is equally human and capital intensive. Why should a blood sample be mislabelled or mishandled amidst a devastating outbreak like ours? Who took the sample? Why? When? Where? Where is the patient now?

Everybody involved in the war on Ebola, particularly the lab technicians, are paid from donor funds on a weekly basis (not monthly). We are no professional medics but we know that every patient diagnosed is entitled to an individual form bearing his/her name, age, sex, place of origin etc. Therefore, the term “Missing sample” simply mean that the wrong people are being paid for the wrong job. If the lab technicians cannot properly label a blood sample which is the only source that can determine the patient’s fate, how can they distinguish Ebola from Malaria? Considering the corrupt  nature of our administration, I consider the missing sample to be someone whose sample might have been taken but he/she is intentionally left unquarantined either due to his/her political status or social background.

It must be noted that one of the major reasons why Ebola virus quickly spread across the eastern districts of Kenema and Kailahun at the initial stage of the outbreak was the lack of transparency and professionalism in the labs at the Kenema Government Hospital. It was proved that lab technicians were paid to declare Ebola patients healthy while none Ebola patients, who could not afford to pay, were accommodated together with real Ebola patients in the same facility, thereby exposing their innocent lives to the killer virus.

If we have to conquer the war on Ebola and celebrate a true victory, we need to practice more transparency, accountability and seriousness at all levels. Let the “missing sample” be traced for heavens sake.

I have no prejudice against someone, I’m simply thinking out of the box…