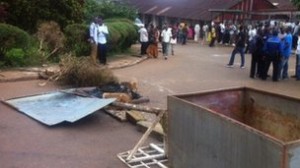 A recent article that was reportedly published in the August 6th edition of Awareness Times newspaper headlined “APC & Blackmail by Rebel Students in Lawlessness” (thisissierraleone.com) has drawn a lot of attention and views in equal measure from various quarters. According to the article, a group of students had stormed central parts of the capital Freetown in protest over the “the rustication of thirty-one colleagues by the college authorities for using the campus hostels illegally”. The report further indicated that “more than two hundred students from Fourah Bay College (FBC) had threatened to ATTACK the author, Ms Sylvia Blyden who is also the proprietor of the publication”. According to the paper, “they felt bad by Blyden’s report and promised to attack her and the Awareness Times Newspaper office in any way they could”. In addition, one of the students who reportedly spoke to Concord Times on condition of anonymity, said “it is good for a journalist to investigate a matter properly before going to press to avoid trouble, just like what Sylvia Blyden has just done to herself”. Can I “hastily” just add that it is also advisable to put our brains in gear before we engage our mouths?

This article is not about the veracity of Sylvia’s report, but what has caught the attention of many people is the promised reaction of the students. It must be pointed at this point that according to the reports, it was a cross section of the student body that issued such a threat; that “they had planned to go and vandalise her office but found out that she was not in town. We are ready to receive her at the airport on her return from the United Kingdom to teach her a lesson that she will never forget in her life time”. Another student is quoted as saying that it has been “the habit of Ms Blyden to write negative reports about people but that she has reached her limit. She has asked us a question and we will answer her soon”.

This is no attempt to defend Ms. Blyden’s story but the kind of reaction that is being promised by students has left little to be desired. History tells us that the student bodies, especially at FBC, Njala and Milton Margai College have symbolically served as the main and unofficial opposition to governments throughout our history. They have served as the voice of the voiceless as far back as any of us could remember. What makes this episode different is the threat of violence that has been promised against an individual by a cross section of the student body. There is little doubt that the headline in the paper was bitingly hard and is bound to make the blood boil in some circles. It is a fact that over the years, successive governments have shown lack of support and a corrosive attitude of neglect towards the educational institutions. From infrastructure, stipend, bursary, student meals, and accommodation and right down to transportation, these have always been the bone of contention between these governments and the student body.  The suffering that students have had to endure in their pursuit for higher knowledge has been well catalogued and documented.

But the decision or threat of violence against an individual is the least of reactions expected. We need to remember that this institution has served as one of the warehouses for the production of leaders in not only Sierra Leone but from all corners of the continent and even beyond. To think that some of these students who are reportedly threatening violence today might just be our leaders tomorrow is a very scary thought. If these potential leaders cannot handle criticism today as students, what would the future hold for us when they graduate and enter into the political, social and economic bloodstream of the country? Without any attempt to exaggerate, it is difficult to envisage or even bear the thought. At best, we should perish that thought.

Sylvia may have ruffled their feathers, and being one of the prominent journalists in the country, she has had her fair share of controversy. But that is what journalists do; trade in pain. As a journalist or an intellectual, she has reported correctly or incorrectly, and by so doing has thrown down the gauntlet into an intellectual amphitheatre. One would expect that such a battle (I use the word loosely) will be right up their street. One would also assume that the student body will have enough in its arsenal (loosely again) to respond to Sylvia; particularly on the intellectual level. There is little doubt that the initial student reaction may have been emotionally laden, but to consider physical violence does not only lose the argument, but equally erodes every iota of respect that we have come to associate with this illustrious institution. There is a place for people who deal with situations like that in that way, but FBC is not one of them.

We appreciate that riots can be seen as the language of the unheard, and there is no doubt that this institution among others, have trudged on unheard for a very long time. Student protests are nothing new to the seasoned observer, but the timing of such a protest and its attendant threats cannot be more ironical. It is with the deepest regret and sadness that such behaviour has come barely 2 weeks since the sad loss of a comrade, philosopher, and leader Hindolo Sumanguru Trye. Since his death on 26th July, the tributes have been deservedly flowing.  Student protests and the history of student protests in the country would never be complete without the mention of Hindolo S. Trye. He laid down his marker in 1977 by leading the protest that has come to be known as the “No School, No College” demonstration.

Siaka Stevens had ruthlessly wiped out all forms of opposition and transformed our political DNA into a one-party state. It was obvious that the only form of opposition was going to come from the student body. Hindolo, together with other notables like Saaba Tumoe, Cleo Hanciles, (may their souls rest in peace) went a long way in restoring and defining the role of this institution for generations to come. I will not attempt to present a tribute here, but suffice it to say that these guys would have certainly done with a better way to remember their sacrifices and good work; especially at this time. What would Hindolo and others do if they were in this position? For starters, they would have engaged the ASSOJO Press, transformed “Chuks”, and populated Aureol Times. They would have used the media to put their point across without the need for threats of a physical nature.

Threatening violence may appear to do well but that in itself is temporary; as the evil it does is permanent. Mahatma Ghandi, one of the arch angels of non violence once said that “violence and intolerance are obstacles to the growth of democratic spirit”. Violence, even when well intentioned (not in this case), always rebounds upon oneself. It is an open secret that the country will be going to the polls in three months’ time. Among other causes of anxieties, is the threat of violence, which had been perpetuated in no small measure by some parts of our mindless so-called media. In their divided and sometimes misguided loyalties between the citizens on the one hand and their political paymasters on the other, they have used emotive languages to peddle the worst aspects of our society. Tribalism, religion, gender, blackmail, and all aspects of the dark arts of electioneering have been used to put the frighteners into our politically fragile psyches today. Against such a backdrop and as we hope against hope for peaceful, free and fair elections, students from FBC or any other institution would be the last people we would expect to buck the trend.

To all intents and purposes, all that these students may have been asking for is social justice, for all we know. But social justice cannot be attained by violence. Violence kills what it always intends to create. This may be farfetched but check out Iraq, Afghanistan, Libya and now Syria. In spite of the lofty ideals that have been peddled, violence has been used as the vehicle and the rest is history. It happened in our country and therefore no need for the history lesson. To hear that our future leaders at FBC are threatening to use violence to “right” a “wrong” is not only a failing of youth, but also a refuge of incompetence.  As a country, we should aspire to wean ourselves off the seemingly incredible fascination with violence. In as much as I don’t promote violence, when students kick against college and university management, such protests (minus the vandalism or otherwise) can be seen as indications of a healthy growth and a normal functioning of the academic mind. But there are channels and “canals” to channel such views. Majority will support indirect action, which could be less confrontational but more effective.

As mentioned earlier, we should endeavour as a country to move away from our seeming fascination with violence, war and any acts of war. Reading through some of the newspapers that reported the student rumpus, it is disheartening to see them describe or refer to the students as “rebels”. An FBC press release headlined “FBC Admin Issues Release on Rebel Students but…..” in Awareness Times is a misfortune of semantic dimensions. It is a reckless use of the word that seems to germinate into an unintended image. Words can have meanings only in context, and within the background of strikes, riots, and protests, describing the students as “rebels” does not help the situation. They might have rebelled against the administration, but calling them rebels in the light of our recent history is not helpful at all. We know all about rebels in our country. That is a symbol we could do without; in the context of the current political climate. They could have been “lawless”, undisciplined or otherwise, but “rebels” may carry a different connotation from the intended use. Twenty two students were released by the police “upon the direct intervention of the State House Chief of Staff Keifala Marah (Awareness Times). The paper interprets this as an indication that the “APC regime wants to entertain these lawless student rebels”. There you have it. Hmmmmmm.

Fourah Bay College has an illustrious history that needs no further embellishments. It is one thing to go through university, but it is another to allow for university to go through you. As students, we will always have something to complain about. Let us try and channel it the right way and remember our roles as models, not only for the present but for the future. Perhaps the student union could initiate a SAVE (Students against Violence Everywhere) campaign as a fitting tribute to this debacle; and you never tell, we might just go national; from the burning embers of this misfortune. Remember that if you make peaceful revolution impossible, you would make violent revolution inevitable.

Don’t forget to turn the lights out when you leave the SU Building.